FP2 with Android9 upgrade release - cpu cores 1 and 3 active only, others are parked/offline?

anyone notice or is this just a weird obscure bug over here?

ever since this android fairphone2 went from android7 latest from 2019 or so to this aprils build of android9 upgrade, it shows in various cpu tools (cpuz but also open source oss cpu info tool (CPU info (open-source)) by kg soft.

apparently two of the four total cpu cores become permanently shot down. they dont show any value or reading for their respective frequencies, no nothing. their frequency and power bars are completely blank, white, not being populated with values.

the other two remaining cores apparently work all the harder. They barely calm down. the first few days when I originally upgraded this phone to android9 I became used to the procedure that i put the phone completely into plane mode, wifi off, and battery saver on whenever I stop using it. Whenever I wake the phone and want to use it, it first kind of runs pretty much amok after such a “deep sleep” state, as first the google play store goes checking for misbehaving apps, even though nothing at all happened. It slept after all. and with only two cores available or something this takes really long, many many minutes the phone barely reacts to touching and typing during this period, and I have still that other ongoing nasty bug of the screen going dark within less than 30seconds no matter what I tried in the past years. no factory reset no nothing helped about this blanking issue.

anyways so when google play store checked the phone, it gets really hot in its cpu area on the back side and even the screen and the battery become hot. it really drains the battery, multiple tens of percentage (value), when being between 20-30% battery and waking it back up, it often ends between 10-20% after such happenings ;(

anyways, eventually it settles and gets better and it cools down. but only two cpu cores are ever being used since this android9 experiment over at fairphone ;(

anyone else observing this? havent read anything about cpu cores getting disabled. maybe its just a sensor and a firmware/wrapper issue or whatever way they brought us the android9 updates without the actual help of the chipset vendor. I kind of read some articles years back about these attempts and similar, but I forgot. But then again this FP2 is really even more erratic and mishaving ever since that Android9 upgrade.

I only use this FP2 for tablet use cases, so no phone calls, no sim(s) inserted, no nada. wifi only, simple surfing only. not even videos or fancy stuff. there are only a few basic apps on this android ever since it became decomissioned still in Android7 phase. Then I kind of looked forward to experiment with the Android9 upgrade for it. But I guess the situation has really become a pain.

I installed “CPU Info” 5 minutes ago and it looks fine to me.
4 cores with “life”.
I’m on open with Andorid 9.

I am using the vanilla FairPhone Android9, not open or whatever exists additionally? The normal google android9 that fairphone release for their FP2, which updated coming from Google Android7 previously on the FP2 before that.

What you describe might be the result of an overheated SoC. Do the cores work again after you have powered off and restarted your FP2? (You better wait for a little while in between to let the phone cool down…)

No. Those two cores are always disabled of course. Even when over night, cooled off, everything in flightmode, disabled wifi, power saver. Then waking it up, with very low temperatures showing in the cpu monitoring app. Two cores are always shown as stopped. When I then slowly re-enable features on the phone, leaving plane-mode, turning off power saver, turning back wifi on, it all stays the same, two cores off, cpu usage spikes go up and being used as probably google playstore connects back to google backends and all that. Nothing else being used or actively happening on the phone. The phone doesnt become hot or bothered when there is not anything happening. It becomes hot when it works madly on updates etc. And maybe now behaves differently as it is only using two of four cores. Maybe it even stays cooler as it would stay when using all the total four cores? whatever. Android9 fairphone os on this FP2 is kind of borked as it brings me partly seemingly permanently deactived cpu cores. This is the same after reboots and everything.

I am on Lineage OS and have installed “CPU Info”. My SoC is the MSM8974PRO-AA, which is the slowest Snapdragon 801. “Core 0” as well as “Core 3” are working steadily, while “Core 1” and “Core 2” are stopped most of the time, but actually do work sometimes.

Here is a screenshot made when all four cores work to balance the load: 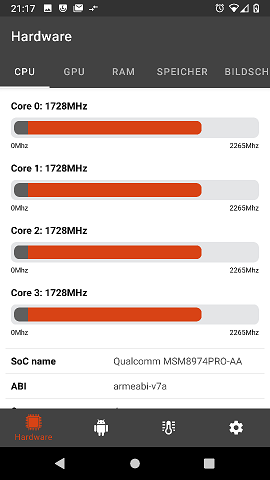 The may update of Android9 that was just recently published, has been applied to this FP2 over here, and there were odd enough, two reboots. The FP2 updater briefly downloaded something and claimed to upgrade/reboot. But reboot was very brief and during bootup screen there were not the usual colored circles animating and the upgrade bar visible, but the normal lock screen reappeared quickly. It was again/still on FP2 Android9 March 2021 release. Whatever, but at this stage it was already again showing that all four cores of the CPUs were not back working again and not two of them stopped. Afterwards the FP2 updater again claimed of having the 2021.05 update and rebooted once more, this times the upgrade bar, animating circles moving around and took quite a while, and the phone becomming very hot, around 85°C when ulocking the screen after the upgrade. Eventually calming down.