I wonder what FP2 spares will be available … and when.

It would be good to order a spare battery (and maybe an alternative back) for delivery with the FP2 … saving on packaging and on shipping costs.

With USB charging it’s less of an issue these days, but even a good smartphone will eat up its battery in a couple of days … and when I’m out and about in the world it’s so useful to be able to swap the battery out for a fully charged one.

Other spares wishes? Maybe if we all ask Fairphone nicely?

We’ll have to wait and see, though for FP1 the spares were there quite soon after they shipped the first batches. They did reopen the shop briefly so people could order cases with the FP1, but I don’t think spares were available before delivery of the FP1 special edition.

For people thinking about buying a battery for future use (as opposed to concurrent use as described above), remember that batteries ‘age’ even if you’re not using them:

I contacted Support yesterday because my battery started bloating and I got this reply today:

We have currently only batteries left that have been lying around for roughly 1,5 years. We can therefore not guarantee that they still have the same functionality as a new one. If you want I could still send you one today or you could wait for roughly 1 week and then we expect a shipment of a few thousand new batteries. Let me know what you prefer.

Also, in the FP2 modules wishlist there’s already mention of a charger for battery spares. I wonder whether they’ll eventually included gadgets such as those in their shop.

Charger for a spare battery.

Good question, and I wonder for how much time they will be avaiable… 5 years (the minimum expected life of the phone itself) or more?

Batteries for my moto defy are still available even though it wasn’t ever a particularly popular phone and is now approaching 5 years old. The reason being, it takes a battery that fits several motorola phones so it’s worth the people who made them for moto to keep on making them, and it’s worth it for copy merchants to clone them too. The same used to be true of Nokia.

Standardisation of components across products is a marvellous thing (remember the days when you had to ask around the office “anyone got a Nokia charger? No, not that sort the new type”) … but something product designers lose in the pursuit of making things look the way they want them to.

I hope that the FP2 uses an off the shelf battery or at least that the battery spec is “leaked” to a generic battery manufacturer! Maybe they could audit and approve a battery seller to sell them direct?

Battery availability and software updates are what will keep the FP2 in circulation IMHO.

In the case of being “out and about in the world” I would recommend you a power bank. There you have multiple smartphone charges and they are actually designed to keep the charge for a longer period of time as opposed to smartphone batteries.

I have one from these guys: https://www.powertraveller.com/ they are very good: functional easy to recharge from many sources and well built; they even do a hand-cranked generator (as well as solar PV) so you can re-charge without a power source. Doubtless made by slaves and not very repairable as once the Li battery inside gives up, the nice steel enclosure and the electronics are also useless. Plus you don’t want to carry one around and fiddle about with jump leads, when a tiny spare battery will fit in your pocket. IMHO anyway.

Generally now that everything is USB you can charge off a laptop, in the car or from mains …it’s admittedly less important … until the battery capacity has died.

But I will still be getting a spare battery asap. 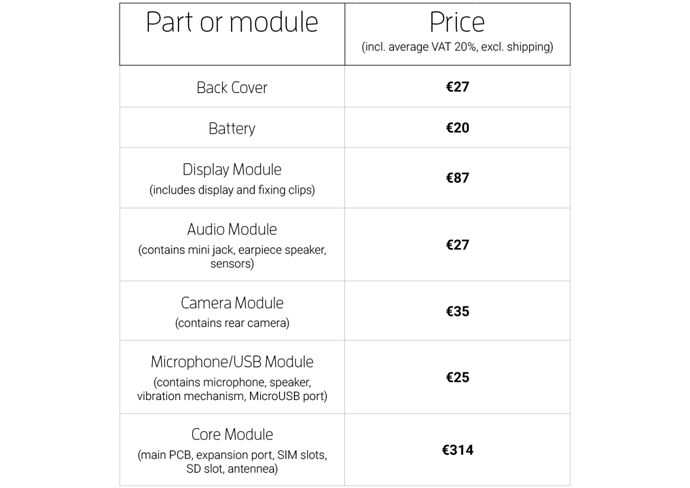 They seem very reasonably priced, especially the screen. Unless you manage to break the core module!

The cool thing is that you can build a fairphone “from scratch” for almost the sane price of a complete phone !

After quick calculation if all available spare parts are summed up, don’t know, if anything is missing then (screws, main frame etc…) 535 EUR vs ~520 EUR as bought complete (for Germany)

Seems reasonable. I think they really broke down (like in the cost break down) each value of the part of the complete phone…maybe exatly with the intetion to receive comments like yours “nice that it fits”

Nice that the spares are listed so soon.

Hate to piss on the bonfire but: prices for some parts (especially the back cover) seem strangely high - which we can probably assign to the fair manufacturing (so fair enough) - but the shipping is quite expensive too.

I just went to order a spare battery and found a minimum shipping cost of 8.25euros by DHL. Why not at least have an option to have smaller parts put in an envelope and posted (about 2 euros for something battery sized). I’ll order one eventually regardless - but it hurts a little.

By comparison, an HF5X battery for my motorola is £3 including shipping from ebay (maybe fakes of course and doubtless made by slaves who pour waste materials into the Yangtze).

We already had the discussion. Lithium batteries are considered dangerous goods and shipping them by mail is very expensive.
The spare parts altogether are more or less the price of the phone. There is a reason for the phone being fairly expensive - the individual parts must therefore also be expensive.
Fairness and not treating people like slaves costs money. So what?

Doesn’t seem to bother most ebay traders! Also doesn’t bother me, as I have two spare Li batteries rattling around in my day pack and another 90Wh one in my laptop case. Also doesn’t explain the shipping cost of a spare back (also €8.25).

Whilst the “fair” part may explain the item costs, I shouldn’t think DHL is any more “fair” than the national mail service - probably less so in fact ;¬)

Because FP is not amazon or so, I can imagine that part of the shipping costs are also “order costs” with what you pay for the paperwork, the packaging, the man-hours and so on. No idea how FP handles that