No reboots after i downloaded the 1.4.2 update. Could be good luck, to soon to say. But i have turned off all datatraffic but wifi.

No reboots after i downloaded the 1.4.2 update.

I upgraded to 1.4.2; on 1.3.6 my FP2 was basically fine, although once every couple of weeks I would get an apparently random reboot.

1.4.2 is very unstable. My usage pattern has not changed but now I am getting multiple reboots a day. They occur when I am using the phone most often but in different apps - I can be zooming in google maps, clicking send in FB messenger, selecting a photo in instagram. As a rule I am doing something on the screen though.

There are two additional aspects. About 1 reboot in 6, it’s not a ‘quick’ restart; it does the “optimising android apps” thing you get after an update. This takes maybe 20minutes and is a real problem - especially when it does it when I really need the phone! I know of no way to skip this. About 1 in 4 times, it’s not just restarting - it is crashing / screen black / whatever and requiring a battery remove/replace to get it going again.

Finally, I have had a few “system UI has stopped” errors at various points. Plus, I use the default FP2 launcher, with a static photo as wallpaper. On 2 occasions in the 3 days since i upgraded it has somehow lost the photo and reverted to a blue fairphone default wallpaper. this makes me wonder if there’s a systemUI issue underlying the reboots as well?

Anyway, all advice appreciated. I generally close a lot of apps so little is running in the background.

I moved your post here as this is the only topic about random reboots (I also removed your posts from the random crashes and reboots during phonecalls threads, as those are different issues.)

Thanks Paul - I wondered if the phone call thing was different, as that was consistent with long calls in 1.3.6, and in 1.3.6 it was a guaranteed way of triggering a crash/restart for me (although not the only thing that caused restarts). I’ve done the update again - seemed to go OK - will see how it works out. It had seemed to work fine the first time of course

No random reboots since update to 1.4.2 last week Wednesday evening. But I had to restart my FP2 manually last Sunday afternoon because it lost the connection to the mobile network.

I’m at 88h uptime now with 1.4.2
That’s clearly my personal record without random reboots so far.

I got random reboots since the update to 1.4.2 last week.
I tried to fix it with a downgrade to 1.3.6. But it didn´t help. So back to 1.4.2 and still random reeboots.
I wrote a support-ticket last friday, and still no answer.
All the fixes here in the forum did not helped. But it semes, that it helps a little bit, if i enable the mobiledata-use. (if this is the correct term)

Still no reboot since the 1.4.2 upgrade. 190 hours uptime. Hope this problem is really fix now.
Thx

After the second go at updating to 1.4.2, my problem continues. The frequency of crashes/reboots may be a little less but it is still at least once a day, and almost all are blackscreen crashes where I need to remove battery or hold power for 10s, and then “android is updating” comes up when rebooting so the phone is out of action for 20-30 minutes. I noticed a software update to the Updater yesterday so when i have stable wifi today I will do the update again.

I have turned off automatic brightness control but that hasn’t made a difference.

After about 150h it happened again. But I can definitely confirm that the random reboots became less frequent in my case.

The former version 1.3.6 was 99% stable on my FP2, but since this week and the installation of the 1.4.2 version, I had 10 reboots a day. It seems to happen when a big calculation is running on the phone. I made 3 hard-resets after that and it seems to be a little bit better, but the pb’s still there. To replace the 1.3.6 version is useless in that case according to what I saw in this forum and I don’t know know how to do it! I hope a new version will help on that reboots issue…

Hello everyone. I did the update on 1.4.2. last friday morning. Since then i can practically not use my phone. It keeps switching off. Either only quickly when the blue fairphone background is showing or completely and it starts to install apps etc. agian. I am no telephone/ computer geek, so i am pretty lost. i cold curse friday morning when i did the update. do i just have to wait or what? please help me.

My situation remains the same - a crash (where sometimes the screen remains black but lit slightly, and sometimes if the LED is active that continues, but the phone doesn’t respond to anything other than 10s+ pressing the power button) about 3-4 times a day, with on average one of those going into “android is starting” and then optimising all my apps (in which case my phone is out of action for at least 15m, and gets very hot, as this task seems to use a lot of battery).

About once a day, I get a different error, where the phone locks again instantly each time I swipe my unlock pattern. This usually repeats around 3-4 times, then the wallpaper (I use a static photo) goes away and is replaced by the fairphone blue default. I haven’t managed to unstick it from this relocking mode without a 10s+ power button press. I assume this is a different fault but mentioning here as it’s also new with 1.4.2 and a regular problem for me.

As an aside, I find that when I look at the battery status, if it’s done the weird crash, the status is strange, suggesting some sort of problem for an hour or more before the crash; in this case, twice today the battery status is blank for a period; the status reappears when I’ve rebooted after the crash. On the second occasion you can see I got the “apps optimising” thing and the battery has drained a lot. However, I can confirm that during the second ‘battery blackout’ period I was using my phone a few times, checking apps, and all was apparently fine until the crash. 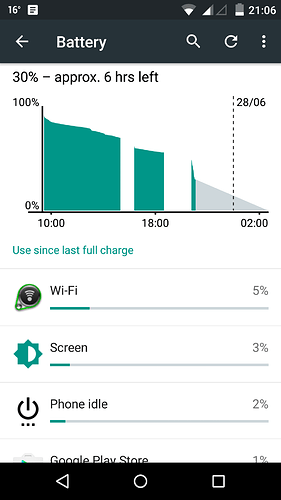 I’m going to go look up how to downgrade to 1.3.6 now because this has only been an issue since 1.4.2. 1.4.2 has rendered my phone almost unusable as a primary phone, as at any moment it not just dies but remains dead for 15min+.

I`ll follow this topic since the support hasn’t answered my ticket yet and i had reboots right from the beginning.
I have reboots most of the time i use pgs+mobile internet+google maps in my car…
But sometimes its just while calling someone or just using apps. 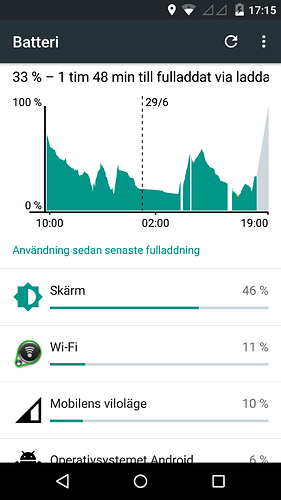 my battery also have black out periods prior to crash. Crashes have increased the last few days.