FP2: Problems with using MyPhoneExplorer via USB under Windows 7

I have problems to connect to my Faiphone2 with MyPhoneExplorer using the USB port.
Here is what I did so far:

I installed an adb for Windows:

BUT (still) always when I try to connect:

I tried some things:

Does anybody has an idea what the problem could be?
Did anybody use MyPhoneExplorer for the FP2 via USB successfully?

I don’t know anything about Windows, but is there a small chance that the Privacy Impact is giving a problem?

I had some problems to install the driver, because I think the old adb driver of FP1 somehow interfered. Connect the phone (FP2 in usb debugging mode, none of the usb options in the status bar checked), then go to your Windows device manager and uninstall all drivers related to Android, adb etc. (Check the option “delete driver” in the confirmation popup). Reboot your computer. Install the Universal adb driver again. Now it should work.

It’s not working for me too!
Had no problems with previous phone, even after upgrade to Windows 10 I was able to sync via USB
But FP2 refuses to connect, even after factory restore
So I’m using WLan for the moment
I’ll give it a new try, when I have some time

unchecking all options of the USB connection modes did not help

and rebooted
and installed the universal driver again.
Didn’t help either

Thus, currently I have the 4 + 1 devices again.
But note that the 4 Android devices under “Other Devices” have an exclamation mark

Strange. Here it looks the same and works… Try it again and reboot the PC without having the phone connected… I had to do it several times as well and can’t remember what I actually did to make it work…

OK, after uninstalling all 5 devices and reboot the following happens:

Thus, I can’t install anything with the universal Driver again, because it says
"ADB Driver already installed".
Thus, it seems uninstalling the “Android Composite ADB Interface” does not really uninstall it.

Are you sure you deleted the driver from your PC by checking this checkbox? 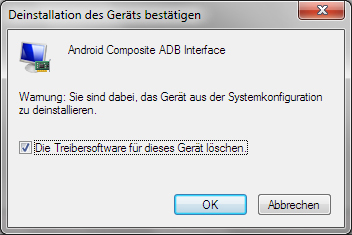 Another thing that might be important is that the phone has to be conected to an USB2 port and NOT to an USB3 port (See http://www.fjsoft.at/forum/viewtopic.php?t=11454).

I finally found the log file of MyPhoneExplorer (Settings -> Connections: show logfile (with log data) or so)
and read:

Thus MyPhoneExplorer is searching adb.exe in its DLL directory, but:
in my installation of MyPhoneExplorer, there was no adb.exe (for whatever reason).
Only the necessary DLLs AdbWinApi.dll and AdbWinUsbApi.dll were there.

Thus:
I copied adb.exe from my “Minimal ADB and Fastboot” installation into C:\Program Files (x86)\MyPhoneExplorer\DLL any everything worked!!!
It works with:

Will send reports that to the MyPhoneExplorer forum later.
Please also see some hints to enable adb under windows here: https://forum.fairphone.com/t/adb-on-the-fairphone-2-windows-driver/11529/15

You could try MyPhoneExplorer via bluetooth or WiFi. It’s slower than USB, but it works very well…

There’s a list of backup tools that have been used by forum regulars (meaning not a collection of spam links, but rather things that we can be sure of actually have been tested with the Fairphone) here:

Since the original Topic was closed because it attracted spam I'm making this #wiki into it's own topic. :information_source: This is a list of backup tools you can use on an unmodified FP OS. If you have FP Open OS you are in luck: root and TWRP are pre-installed so you can make full system backups with TWRP and scheduled backups of Apps (user and system), Apps Data & User Data with Titanium Backup. You can use TWRP without flashing it for a full system backup. Helium Backupdetailed In…

I’m closing this topic as the original problem was resolved and subsequent replies on backup topics in general are too often off-topic, spam (usually by adding in a link ~3 days after the original post), or both.