I recently received a new FP2 since my first one was completely buggy and kept rebooting by itself. The new one is working perfectly, a real pleasure.

But on this new FP, the date indicated on the lock screen for “your own this fairphone since…” is not correct. Actually the time is in the future so it’s quite weird, and of course the date is not link to when I received my first FP2.

Is there a way to modify this date? Even it’s quite complicated?
I know its base on the date/time when I first boot the phone and if it was connected or not but, the date itself is save somewhere?!

Yeah, this wrong message is really good for nothing. Unfortunately you can´t neither delete it nor update it by now. I guess there is a time stamp in the memory which is read. The best would be to allow editing it directly as it can be done for the time settings. Since the purchase date is a date as well, so why not adding this parameter to the settings of “date & time”?

Well, it’s possible but not straigtforward.

I didn’t do more detailled instructions on purpose, because I only recommend it with some experience e.g. with the shell

Here is a example how board_date.bin looks like (Editor Bless)

I got my new Fairphone less than a week ago, and the lockscreen says I’ve had it for 3 months! Did someone else have it before me…?

It would be really useful to have an easy method of changing this date (please Fairphone!), or simply removing that screen from the lock-screen widget. I’m not confident rooting my phone (all I wanted was a fair phone, I didn’t want to have to become a software expert!)

Thanks retsifp for your helpful information.

After a lot of playing with the board_date.bin, I think that the actual value for the month is indeed -1 of the real value, as suggested by Iklaus:

I also think that the phone does need rebooting to RELIABLY load the new board_date.bin. Sometimes it seems to load by just turning the screen off and on, sometimes it doesn’t!!

Hey, at first sorry for my bad English.

My Fairphone 2 screen widget shows I have it for -1 year.
How can I change or reset the time?
In other topics I just have found something about wrong time, but not about negative time.
Rebooting or resetting can’t solve the problem…

Thank you for your help!

I have seen some discussions about this, that some people have a negative ownership of their device in the home screen widget. I just discovered this on mine as well, got it 5 days ago. This morning it was at -1 year 11 months 20 days, now (evening) it is at 21 days. I did not find a conclusion in the posts I found in the forum, maybe my search missed it.
I wonder what will happen in 11 days, when the counter will be at 31+1 days. Will it be at -2 years or at zero. Zero would be okay, a counter being just a couple of days off is okay. In that case, the device was shipped earlier than expected and I will surely not complain this early shipment.
How did the situation end up for the others?

@anja_d & @DietmarP
I moved your posts here. @DietmarP sorry for moving yours to the wrong topic first as I misunderstood you. When you said:

I thought it jumped from negative to positive, that’s why I thought it was related to the clock bug.

Yay, my replacement FP arrived yesterday and it also has a “negative ownership”

First: I am very happy about the fairphone 2, keep up the good work

I have my phone since a couple of weeks and I just noticed the lock screen interactive clock thing.
Apparently I own my fairphone since
-1 years
11 months
29 days

yes, I own it since minus one year…

Is there a way to fix this ?

PS: yes I have read "Fairphone for" count is incorrect - how can I reset it? but there is no real solution in there…

The update from December for Fairphone OS should have fixed this issue.
The upcoming Fairphone Open release (17.01) will also include this fix.

For me neither. I got the phone back in October and it was showing “your Fairphone since 2 months…”

Question: how that counter is managed. For sure there something that started it: first phone initialization?

Today mine switched from negative to +1 hour ownership.
So my conclusion is, that the zero-date is just wrong when the device is shipped, I received mine exactly 14 days ago.
Maybe, when the device is coded, someone estimates when the device would arrive at the customer. Sometimes his/her guess is wrong, shipment is faster, no storage time at the reseller and the device arrives at the end user before that date. So the device calculates a negative date. So no software bug, just a logistic bug. One could
a) change the code to show 0 when the calculated time is negative
b) have the reference date written during system set-up of the first set-up. Problem is, that if you wipe your device and do a fresh install it will start from zero again.

Interesting also that the day-change occurs at around midnight in China. I am living in Germany.

Here is the screen shot. 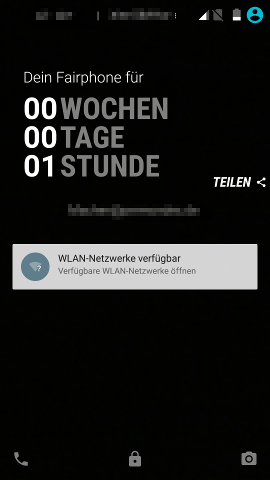 PS: I would rather say “Dein Fairphone seit” instead of “für”.

Initially my screen said 2 months and some days which was wrong, but I assumed it had something to do with me buying from a retailer, I thought they perhaps checked whether the phone was working, so I didn’t bother … until I found this thread. Likes well deserved

For me this tweak worked the other way around.

Well that is curious. Since it is all trial and error, I’m not surprised, but glad that you got it sorted. It is a shame that bug isn’t more reliably ironed out, but I’d much prefer the good work on the core features than to spend time fixing this at Fairphone’s end!

My FP2 started its clock the minute I first turned it on. For nine month’s it has changed on the hour, so it’s been ok. Three days ago I did an update, and then the “Yours for…” jumped one month forward. Later that day it did a restart (which it does from time to time - can’t tie it to any app or any sort of use), and then it jumped ahead one day. After that it changes day at that time in the evening. So - the latest update from FP did not fix this bug - for me it was the opposite. Can’t be that impossible to fix, can it?

Can’t be that impossible to fix, can it?

Certainly not impossible, but as @paulakreuzer said over here:

"Your Fairphone for ..." Mistake

This feature will be dropped with the upcoming Android 6.

So I guess they wouldn’t bother anymore.
The date at my phone added one month after the last update to Open OS 17.03, but now I think I’m not going to bother anymore, too