Today my Fairphone 2 screen stopped working. The phone itself is still working but the screen flickers and is all purple. Apart from all the common problems with FP2 like random reboots, bright spots on the screen, non-functioning apps, freezing screen when charging, my FP2 has worked pretty fine until today. I just pressed the start button to check the time, and there it was - a flickering, purple screen and no maneuver possibility.

The thing is that I really need to backup the phone before sending it to Fairphone and my computer doesn´t recognize the device. I have read several threads about some USB-choice you can make on your FP2 to solve that problem, but since the screen is dead I can´t do anything I. At least the phone is still on.

Does anyone have a solution for this? I would very much appreciate any guidance. 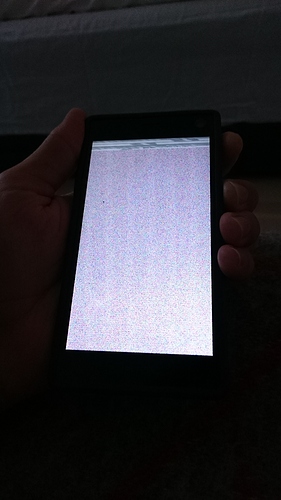 I don’t know where you live, but if you are near a big city like e.g. Stockholm or so, you might want to look out for another Fairphoner. Maybe someone’s willing to briefly lend you his or her display just for your backup.

If you need to backup your files, I made a tutorial to access the internal memory with TWRP recovery long time ago, and I just realized that you can follow all the steps blind:

Sorry, @Mixn, I’ve been busy these days. Hope I’m not late. I think you have some misconception about TWRP. It is a little recovery system that should be installed on the device. The Fairphone Team has adapted this software to the FP2 and ships it in FP Open OS by default. For installing TWRP, you should put your phone into a passive mode called “fastboot mode”, and commmunicate with it from your computer through a little command line program called, fastboot. Here’s a step-by-step guide. I …

However, if you want to backup your app’s data… that’d be pretty difficult,

Thanks! I will look into that. However, I suppose most data worth recover is app data.?

It depends of your use of the phone, and the apps used:

That said, for some apps you can expect an autobackup to “the cloud” (i.e. their servers), or an regular autobackup to a file (like WhatsApp conversations), or a manual you should have ran before the blackout. The last two types are commonly stored on the user data and you can backup the backup with my tutorial. For the “cloud” backup, the app should provide a method to restore it --most probably login into an account, or login and search for an option in the settings.

Edit: For future reference, I’ve make a general topic for the tutorial. It could be more up-to-date:
https://forum.fairphone.com/t/howto-recover-backup-user-data-fp-os-and-fp-open-os/20974/?source_topic_id=20972

I had the same problem - happened to my phone while I was looking for my friends in a huge crowd…
I can’t remember what I did exactly but I think I took the battery out, made sure the display was well connected with the rest and gave it a kiss. and the next morning it worked fine

Hope your phone will come back to life as well.
Good luck and hold on