no, nothing changed. I mean, the battery was more or less stable (after the wifi did not show the explanation mark anymore) and suddenly it dropped very quickly. I did not use it and did not change anything. It was just on my desk and mobile internet was off the whole time. 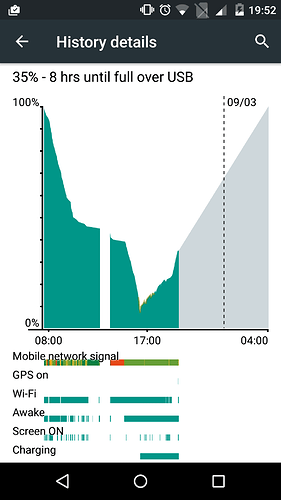 still approx. 6 hours without any intense usage (aka only wifi) is this normal? I cannot use my mobile for a working day without charging…

don’t wanna spam, but I am investigating my mobile behavior here. I had to go to battery saving after 4 hours (so, my battery lasts for approximately 5 hours) and I noticed that the CPU (or top op the battery) is cooled down. Any one know why it gets hot and what to do about that? Is the hotness related to the very quick battery drain?

Is the hotness related to the very quick battery drain?

Probably. And maybe also to your roaming problem? Do you have the Wi-Fi exclamation mark? This also produced short battery cycles for some people:
https://forum.fairphone.com/t/wifi-reconnection-problem-exclamation-mark-after-reconnecting/11753?source_topic_id=12334

I don’t have the explanation mark anymore, but removing it did not really increase the duration of the battery either. it is still approximately 5 hours if I don’t use the battery save mode

I don’t know if you already solved you battery problem, but looking at your screenshots, I see that your SIM2 has no connection. A SIM that’s always looking for a network without being able to connect drains the battery a lot. This would also explain why it dropped so much when you switched flight mode off. Maybe you should disable SIM2 when you are in places where the network is not available.

In fact it is disabled. I did not make the symbols for the phone; if it shows up as simply “no connection” then that would be another bug on the long list.

Ok. When I have no connection, it’s the same icon. But in fact, that’s not a bug of FP2, but a fault of the Android icon design that doesn’t differenciate between no connection and disabled.

I already noticed that it is the same logo and find it somewhat confusing.

When I have wifi I don’t use internet via SIM, to avoid getting the explanation mark… I may not understand what you mean here…

When I put power battery save mode on, the battery drain is gone and I also noticed that my phone is not hot anymore. Here the last 3 hours. So, what is going on? 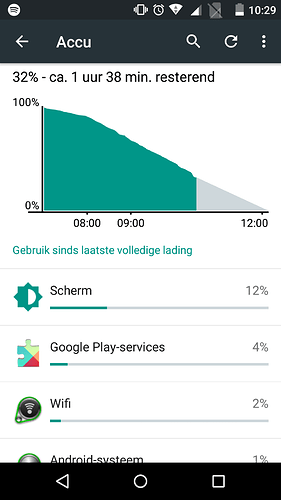 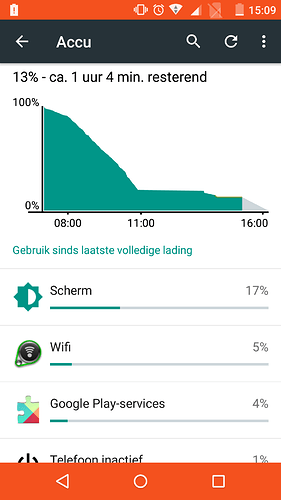 What you see is definitely not normal. The phone getting hot and staying hot is an indication that the CPU is running at high frequency, which it should only do under load (for instance mine gets slightly warm after browsing with Chrome for a while). I’ve attached a screenshot showing how my battery stats look. I must say, though, that I’ve avoided background apps and disabled automatic synchronization of email etc.

I’d start by removing any third-party apps you may have installed, however innocent-sounding they may be (I’ve had bad experience with e.g. Spotify killing my phone even when it’s not in use) . Then I’d test turning off all synchronization of any accounts to see if that makes difference. E.g. email synchronization can be a surprisingly heavy process. If all else fails, I’d start from scratch by doing a hard reset and then testing the phone without installing any apps. 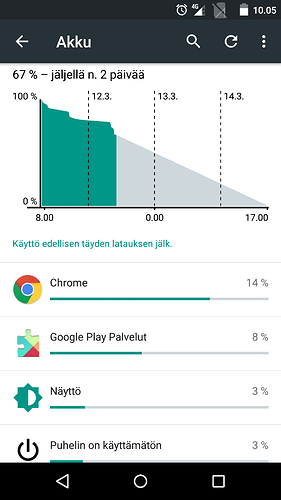 Thank you, I am definetely gonna try this. ill come back to you with the results

I’ve had a really bad experience with the Spotify-App using a lot of energy as well as mobile data because it played the songs along while I was using Spotify on my pc at work. I stopped it by forbidding the app to work in background. So, if you have Spotify on your phone and loose a lot of power, you should eventually look into that.

So, it is definitely the apps. I have my battery on saving mode the whole time but as soon as I use an app it drains like crazy. I am absolutely not happy with this, it means I cannot simply USE the phone!!! It is much worse than the fp 1. Is this a bug or a hardware fault?

Jens_Fischer: I had spotify on fp 1 and never problems. only now with fp2…

I have also noted that a lot of apps draw much power, as well as 4G and WIFI.
One thing that would help is if we were able to modify the battery saver so that it only allows the “active app” to use internet connection while prohibiting for example email and other apps to use the connection. And also allow this when the screen is off. So if you would like to listen to music while having the phone i battery saver mode that would be possible, right now it isnt… In Sonys phones they had a state called “stamina mode” that did this. In Fairphone the Battery Saver mode only works when the screen is on, and then all connections are allowed.

Since not everyone experiences this kind of battery drain (me included), I’ve got another idea: Try a different SIM, just for a day or so. I had this problem with my last phone (lumia 1020) where the battery only lasted 7 hours without even using the phone, until I got a new SIM. After that, the battery lasted 4 x longer.

So, it is definitely the apps.

I am repeating myself, but for this purpose I recommend apps like “BetterBetteryStats”, as you can nail down which app really uses the most CPU power, which in your case should be the reason.

I’m having similar problems, the CPU gets very hot and the battery drains really quickly, like 10% a minute.
I’m going to try a hard reset and see if that helps.