Not a major factor for the extreme cases, but the Facebook app is very demanding on system resources and can cause overheating, reduce battery life and impair speed. I got rid of it, it’s better to use the web version instead.

My phone hasn’t been working properly after the latest Update here in Feb. 2018. It gets really hot in the top part and the battery drains within a few hours. And will only charge fully when it’s off. If I leave it on in the charger - then it just stays on the same % - or even loose battery.

I have both tried to manually re-install the update (twice) and all the “battery boost” tips found in here. But nothing seems to work. It doesn’t seem as if the battery is even fully drained because 1. when I plug it in, the red light doesn’t blink (i.e. it isn’t fully empty) and 2. I can for the most part just turn it back on and then it has between 1%-40% battery still. But then the smallest usage can make it die again - and sometimes not. It’s really frustrating. Can anyone help?

Yes, I’ve tried everything from the battery guide.
No - maybe that’s an idea. But they worked before? Should that make a difference?
No - I just ordered a new today so let’s see in 5-8 workdays!
Thank you

Did you try setting USB debugging to on permanently in the developer options menu? This solved my problem.

Hi! I am sorry, I am not sure what you mean - but it sounds promising.
What is the “developers options menu”?

Go to Settings -> About phone and tap on the build number 10 times. Then the developer options will appear in settings.

Another thing that I just discovered: cable quality can cause charging misbehavior. Check this link for more info.

Have you tried charging without the SIM card(s) (often the culprit for heat and drain)?

Wow, what? How does that work? Is there a topic where this is explained in more detail?

I could solve the quick drain and heat problem on my FP2 by configuring the SIM card to not use LTE/4G but 3G. It’s a SIM card from german provider 1&1 using the vodafone net. There are several providers in Germany like congstar where you cannot use LTE. Perhaps it’s worth a try.

This doesn’t sound like a solution - more an hint as to what the problem is. The quick drain issue has got worse for me over that last little while - maybe one of the updates?
[I’ve followed up most of the other arounds without success].

It has got the point I am thinking of revert to me previous phone (samsung) which I ditched because the battery was degraded.

Probably as there actually is none to acknowledge. But I am only speaking for Lollipop.
No hardware related issue. My phone operates quite smooth in every way.
Looking at going to sleep my battery monitor also states this. (No specific app like Greenify or else installed). 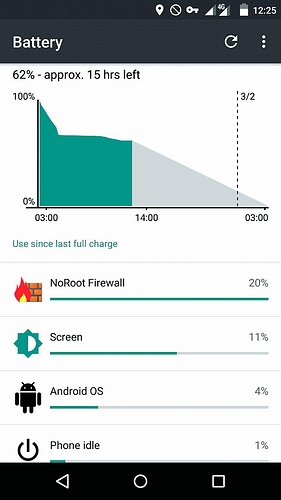 As you can see even with 4G active it bravely went asleep.

If you experience troubles here they are most sure software related. OS or apps may be.

There is another actual tread about such an issue of battery drain “Netflix app is a huge battery hog”. Dr_cool specifically put in quite some effort to track the cause for his phone down and again found another app related cause.

But searching this forum other users have quite some trouble concerning 4G/LTE and their network setup.
Usually phones always try to stay connected. So if someone is located just somewhere where the highest/fastest connectivity is barely available considering the sim card setting the phone will always try to fulfill the preset given. This may turn out in a permanent attempt to search and reconnect to the carrier. Stepping down from 4G/LTE to the next lower level may be helpful here but rather inconvenient and counterproductive.

I am using a 1&1 E-net sim for data with another Blau for phoning (E-net). Both works just fine for me.
The Blau card may be 6 years old while the 1&1 is about 2 years.

First I was using a new 1&1 D-net sim but also had quite some troubles with the data rate and overall connectivity. At home, within a (capital) city, when moving in a vehicle. I also believe this had a noticeable impact on battery performance. But the phone was fresh also missing some fixes by further updates. Stepping down to 3G worked more smooth but that´s not what I am paying for.
Then after a few weeks I changed to E-net and this performs a lot better and to my satisfaction ever since. 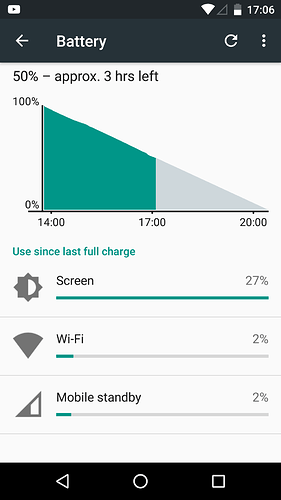 No programs using cpu that I can see. All the processing using cpu are visible. They total 31% however 50% has been used. There is a problem.

You may want to tap on the graph picture like the one above and get into the detailed phone activity graph, and then put it here, sometimes it contains helpful info concerning the discharge rate. My experience is that the app percentages shown above aren’t very helpful because they tend to lack info or the system gathers the info into generic labels.

No, it isn’t. It’s an issue of my contract.
1&1(Vodafone) and congstar don’t provide LTE in Germany. If the FP2 is looking for LTE but the SIM is not capable this search uses a lot of battery capacity, overheats the phone and leads to unwanted boot loops.

@SteveR: you just made me realise that in Settings -> Data Usage, I have Mobile Data turned on for both of my SIM-cards. This is a bit confusing, because in Settings -> Sim Cards, I have explicitly set it to only use one of the two (the card belonging to the country I currently reside in, instead of the country I am from).

Could this be a cause of wasted energy, due to both sim-cards seeking a connection, even when there is no reason to?

The phone will register on a network with both SIMs anyway - allowing you to make phonecalls and use SMS - unless you completely turn off one card, so that won’t make much of a difference.

@felitas what you describe would definitely be a bug in the phone. I had to switch my contract from 3G to 4G when I got my Fairphone (and my operator did that for free) & I don’t recall having any issues before that was done. I certainly didn’t have boot loops and overheating. If a network rejects the phone it may take one more try to connect to a working network on turning on the phone but that should be about it if the software is working properly.

Telekom just recently unlocked LTE for resellers, Congstar offers it now as a 5 EUR/month option additionally to existing plans.
Vodafone will have to react to that I guess, shouldn’t take long.

turned on for both of my SIM-cards. This is a bit confusing, because in

You may activate cellular data for both cards at once if you feel like. in “Data usage”.
The final sim card for data is selected and used in “SIM cards ->Cellular data”. So both cards may be activated for data but it´s relevant which of both sims is the “preferred” one as set here.
The network type per sim seems to be secondary as I could test just now. Preferable you should select the card with better data rate/contract conditions unless both are nearly equal and it´s for you switching when changing locations.

I therefore tend to believe double sim data activation should not interfere as you can only select 3G/4G for one of both sim cards while the other automatically stays on 2G.

Congstar offers it now as a 5 EUR/month option for contracts.