I don’t have any more SIM cards to try (!) but as each individual SIM card works fine alone and doesn’t create any problems I’m guessing that it would be the same with some other cards…

I found out what the problem with my battery is!!!

Since it gets really hot, battery lasts very little… this is definitely not normal behaviour, is it?

PS apparently nothing to do with any particular applications.

This has just started happening to me. Brand new phone (Support replaced mine a few months ago due to restarts). The battery would last probably 7-8 hours max. (100% at 8:30 when took off charge, It would be dying by 17:00ish if I didn’t charge it.

Today, took the phone off charge at 8:30 at 100%. It is NOT connected to mobile data. It is not connected to a Wifi ssid apart from about 30mins first thing. It’s mostly not been used sat on my desk at work (due to no data connection). It’s now 10:44 and the battery is at 15%. So, it’s lost most of it’s charge with no use in about 2 hours. See images: 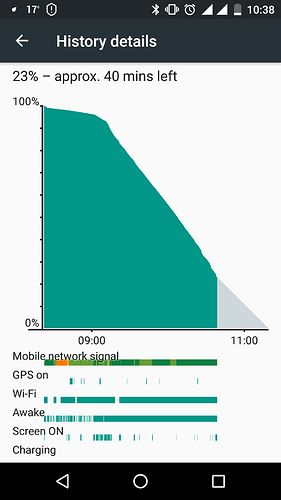 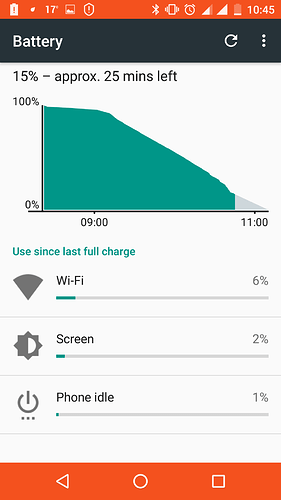 I had a very similar behaviour after installing Open OS update 17.07.6. After charging and switching on the phone, the charging level of the battery remained almost constant for about an hour and then it started draining very quickly - e.g. from 95% to zero in just a few hours. I had the same behaviour with the same draining rate even in flight mode with no app running and the screen turned off most of the time (third loading unloading cycle in the screenshot). 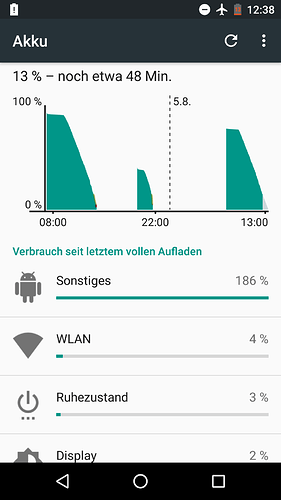 In case someone else is facing the same problem - meanwhile I found the solution for mine: I have Open GApps (Pico) installed on my FP2. Flashing the Open GApps package again after installing the 17.07.6 update solved the problem - no more battery drain

Haven’t upgraded yet (too scared to do it while on vacation and not have a working phone anymore) but I’ll definitely take your advice when I do.

Just one question though : did you flash Pico at the same time? Or did you finish the update completely and flashed Pico alone afterwards?

I did it separately. First, I took the update via Fairphone Updater. And after that was completed, I restarted the phone into TWRP and flashed the Open GApps Pico package.

I am facing the same issues. Installing a new gaaps pico version improved the behavior but I still have the feeling the CPU did not become that hot at fpoos based on Android 5. The power consumption is still dramatic if I use the phone to stream videos or if I use the phone for navigation.
The upgrade from Android 5 to 6 worsened the situation. I would appreciate a bugfix very much.

A post was split to a new topic: Reference to the battery kickstart procedure

OK did all that… Phone’s upgraded and gapps installed.

This seems to have made things a bit better WHEN PHONE’S NOT USED!

As soon as I use the phone battery consumption is disastrous…

I still think that this is NOT application related and that there’s something seriously wrong with FP2.

So conclusion : as long as phone is not used battery is OK… Unfortunately I don’t need a phone I don’t use…

I’m really sorry to say but it may be the end for me… My hope was that FP1 could be upgraded, well this ship has sailed (FP1 is the best phone EVER and I love it!!!) and FP2 been giving trouble right out of the box and till now… Completely unreliable…

Hello. I have the same battery problem. Before the update 17.4.8 it was the display that consumed the most, according to the indications of Parameters / battery. Then it was wifi. I tried all the save-battery tricks without improvement. I tried too Xposed Installer Smart Network module, who should cut wifi and mobile data when the screen is off, no more improvement. According to the statistics of consumption the wifi is always in function, even in airplane mode! In this screenshot phone was in airplane mode since 15:00 to 16:00, but wifi is always on 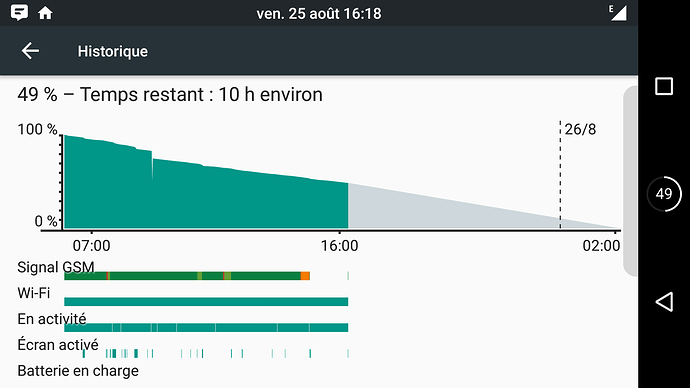 wifi is always on

My problem exactly!!! We definitely need a solution…

I had the same problem with WiFi always on, now it’s gone. Take a look at this post, maybe it could help:

Hi, I have been experiencing the same problems this week: battery drain that seems to be caused by Wifi even if it is supposed to be off (Wifi scanning was also off), phone hot on the back. I have seen this at least 4 days in a row. No big changes lately (update applied in July). The only thing I could think of was some new app. I suspect Chrome: I am on Fairphone Open and uses Lightning but I had to install Chrome to set up an app and I forgot to uninstall it right away after the set up. Anywa…

Thanks chrisse, I already noticed this post and tried all the suggested tricks. I installed yesterday LineageOS and now Wifi is no more on all the time.

What I still have no explanation for is the following:

This can hardly be due to a background process running.
Any ideas?
Of course I take the easy way and don’t charge my phone turned off anymore. An explanation would still be appreciated.

Anyone else seen this before? Phone had been in the whole time in a bag and unused (mostly). Picked it up to see it was at 1% which seemed odd

I rebooted it, and turned battery saver off and I’ve been using it solidly for ages now on 1%… 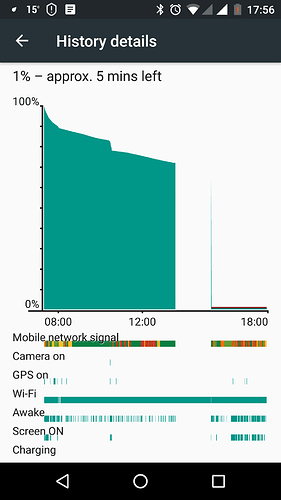 A post was merged into an existing topic: Battery life in LineageOS