For me the problem kind of solved itself. I think it might have been a misbehaving app that got updated around the same time I updated the firmware,

I cannot confirm this. Actually with each update my battery/phone performance got better. Now I can keep on one full charge for almost 2 days when not using the phone heavily. The update worked fine right from the start. But since there are many other users running into troubles with this update there must be something they all have in common. I would rather assume a bad behaving app.

Hello @juanmog, you have probably fixed this already. I have downloaded the Greenify app and fixed my battery problems. I was really ready to give up on my FP2, but now battery lasts at least the whole day.

Before Greenify (free on google play, also requires very limited permission and doesn’t need rooting, apologies if it doesn’t make a lot o sense, I am not a tech guy) I had to charge twice a day and really my FP2 wasn’t reliable enough as a phone. Hope this helps everyone.

Thanks for that tip, my fp2 is running better since it got replaced for
other reasons, I think I got a normal one working in a normal way and
having some rare random issues, nothing to be alarmed at the moment I guess.

I’ve just downloaded the app to make the battery last longer anyway, didn’t
know it, I’ll try it. Thanks again

Hello all, I got some quite similar problems of battery draining. It seems to be WiFi andmobile network biggest consumer…with a step from more or less 80 % to 40 %… 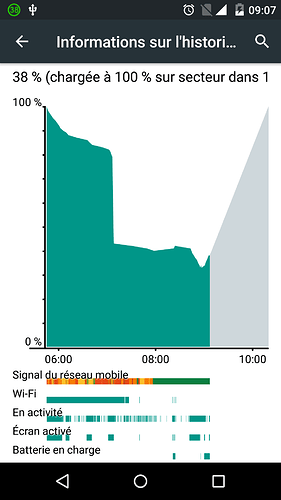 I also want to share my shortly made new experience with an issue draining the battery in no time.

Since the beginning in last February my phone worked to my highest satisfaction. The few glitches it had were ironed out with each update. Now I am with the latest version. Although I own two accumulators I do not often have to swap them as meanwhile I can keep it running on one for at least a day for my needs. But I must admit not using hungry apps like facebook or w**@pp, let alone extensive games.

Over the holidays the phone performed very smooth not used very often standing by for a few days on one charge.
Yes, this sounds unbelievable for some users here, and I am not playing tricks with rooting or else, only battery saver and flight mode.

I have two sim cards and by accident formated my 128GB sd card with about 60% full.

After I then copied back the lost data returning home (no apps, pure data) I for the first time had to experience an issue draining my battery within a few hours. I realized it the next day after taking the fully charged phone with me.I let it the same way as always when at work and was quite surprised seeing the battery down at nearly 20% after only 3 hours not being used + battery saver on. Now what is going on here I thought.

While investigating on this case I found information about this background service called “media” or “media storage” which
also triggers sub-services (media server). 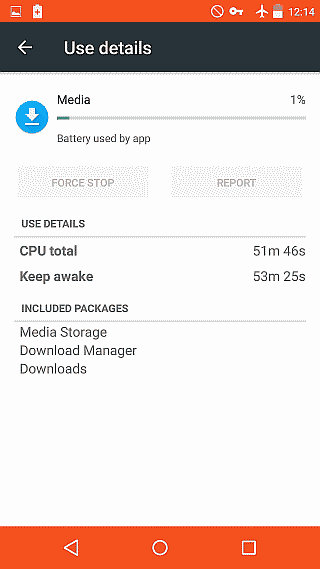 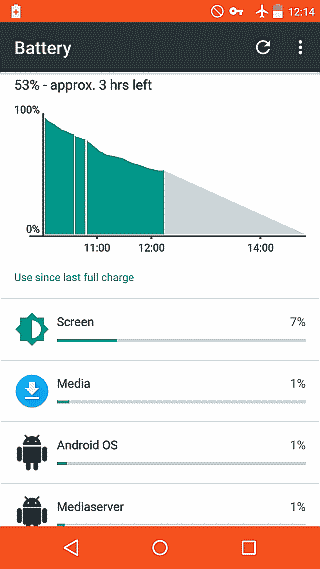 It is a file indexing service. On Winslows you may enable or disable it, but Android keeps it active by default for quicker access and better performance. As I could read the problem may not start when having many large(er) files on your data storage but having a lot of small/tiny files like html, icons or small images cluttered on any data storage.
This can get this service going mad. Beside music and video files I did have a full language course web based with about 184000 files installed and it always takes long time to copy this 3.8 GB chunk.
At first I could not stop or disable the service as all buttons were grayed out. DisableService app helped me to do so. Also unmounting external storage will cut down the indexing demand.
At last I also cleared the cache and data of this service (>600MB), applied ccleaner app, rebooted and also deleted some not necessarily needed folders before I released the service again.
It still had work to do, so I kept the sd card unmounted for some time to see how much influence it would have. I expected the service to disappear from the list of running tasks and it did after some time. Steadily also the power consumption decreased and the phone also cooled down. As soon as I mounted the sd card again the service showed up in the list doing what it should.

Meanwhile it seems to have finished as it is out of the list and all works fine and smooth again, but now it holds 0,96GB of index data. There you see where your internal storage space actually goes.

I was planning to go for a 256GB sd card, but now reconsidering if this would be a smart senseful move in this case.

I turned on my phone the other day and…

Phone was charged up to 15% with battery saving mode on.

Still can’t figure out why… no SIM card in the phone just a sd card.

I had this, too. When I was collecting things on a map (that is using the both battery-drainers display and GPS).

If your phone battery still drains so quickly, you should remove the SD card, reset your phone to factory defaults and run the phone without any user-installed apps. (If then the battery is drained unusually fast, then your phone is defective and needs to be replaced.)

Hint: if you don’t want the mediascanner indexing a certain folder, then find a hidden file “.nomedia” on your storage and copy it into the folder. Amaze can show hidden file, if you switch “show hidden files” to on in settings. It could be a good idea to copy that file into all folders except those with photos and see what happens.

In my flight mode is GPS still active. I have to turn it off separately if I wouldn’t want it.

Oh, many thanks for this hint. I did recognise this file, but had no clue I could actually use it directly in such way.
Yes, I will do this for sure. Do You literally mean “all” folders or does it hold off the indexing service when being copied into each root folder keeping further sub-folders?

I too had problems with rapid battery drain on my FP2. Following an OS update sometime last year I was getting 6-8 hours (sometimes less) from a single charge. I was having to charge the phone one, two, three or more times a day. Aggggh! Tried deleting apps, turning off GPS and so on … and so on. The only thing seemed to make a difference was turning off email sync for both of my email accounts (one IMAP the other exchange). This helped a somewhat, but it was still far from perfect.

Finally, a few days ago in a state of advanced desperation and hair loss , I bit the bullet and did a hard reset via recovery mode, removing all my data & apps, clearing the cache and taking the phone back to square 1…

… and wonder of wonders it seems to have done the trick. I’m getting two days out of a single charge. Battery-wise it’s like a new phone!

I’m re-installing apps very slowly and gently - just a one or two each day just to see if there’s a particular app that sends it back to battery hell, but so far, so good.

I can’t say if this will work for you, but it did for me.

For what I could see of most post images, everybody is having a similar problem to mine, or better say I am having the same problems as many of you!. Wifi drains my battery. Not only that, but when i switch it on the phone becomes scarily hot as many say, towards the top back of the phone. It becomes even hotter if i have network data on. and even worse when i have the two sim´s data on (each grab signal in different areas and i dont always remember to switch one off, only when it becomes super hot)

I wonder if it will have to do with any parts of the software of the wifi and network antenas/ receivers, specially the wifi receiver or its ability to swap between network and wifi useage.

Fairphone team, when will you be having a look at this? it seems to be a quite common problem.

Well, some people have others does not, such as me.

There is almost no time when I can realize my phone getting hot anywhere.
Sometimes while charging its temperature may increase a bit, but it cools off again when finished.
I do have two sim cards active and another sd card. Also there is no change when bluetooth and wifi are active.

So for my device I cannot reconstruct this critical behaviour.

I cannot confirm any overheating. My 2 FP2 do bt and wifi just fine without temperature increase. Both with sim card and data connection, both have a sd card inserted.

I think one of the most underestimated error sources in android is the app ecosystem.

I was experiencing really quick battery drain over the last couple of months and initially thought it was the battery. After swapping the battery for a new one didn’t help I began looking at the issue a bit more. I found that Google Play Services (which is used by a variety of Google apps for synching, location etc) was using a lot of battery according to the battery settings page (more than the screen was using). There’s some information about this online - it seems to be an Android problem that affects multiple phones, not just Fairphone.

I tried a few fixes suggested for that issue but in the end the one that seems to have worked is running an app (available on the Play store) called GServiceFix. My battery has only dropped 6% today when normally it would be more like 60%. The app is free so worth trying!

Exactly the same problem for me. CPU gets really hot and within 4 hours the battery dies. I’ve already sent my phone in for a previous issue, it’s really starting to grind my gears. I just wish I’d have a phone that works, and it’s not like if i constantly use it for some kind of extraordinary shit.

Please FP try a little harder, would be a shame to have to switch back to another brand.

As Android 6 is coming available this month you have a great change that the battery performance will improve. I read this in the following announcement.

Many thanks Werner, after trying all sorts of crazy things this seems to have fixed my battery problems.

I wish I had tried it first!