OK, got my fairphone2 now and tried to install SnoopSnitch (https://opensource.srlabs.de/projects/snoopsnitch).

Well, I though the FP2 is already rooted (but I have no clue about what this means in detail, because this is my first smartphone…).
So, can somebody help to explain what the problem is or give a hint what to do?

Thanks and best
Nico

FP2 is not rooted by default. They said they would release instructions on how to root it soon.
If you can’t wait you can use KingRoot at your own risk.

Is there an explanation for what root access means here in this forum? I tried to find one using the search function but wasn’t successful. Possibly it might be a good idea to add a wiki entry or such for this kind of things.

Here’s an explanation used by @Stefan before:

Phone got rooted - what to do?

What is rooting?
Rooting is the process by which you regain administrative access to your phone. Even though Android is an opensource operating system, you still don’t have full “root access” to do what you please on your phone. Back when the iPhone launched in 2007, the hardcore techies quickly realized the true potential of the device and the cruel software limitations that Apple had sealed it with. What became ‘jailbreaking’ on the iPhone was quickly translated to other platforms as well, and when the world saw the first Android back in 2008, the term “rooting” was born.

Is there an explanation for what root access means here in this forum?

No snoops or IMSI catchers at Fairphone office 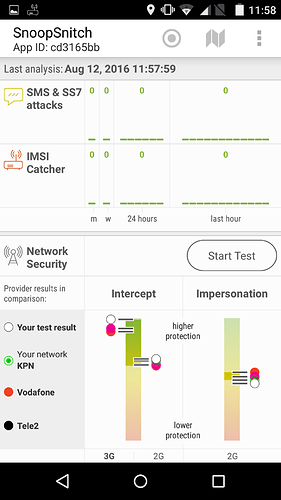 I had it running also for some time, with two events, which most probably were those “harmless” events while roaming…
But it’s a real battery hog, which is why I only start it very occasionally

Yeah, I only keep it running when I’m at my desk and the Fairphone 2 is plugged into a charger.

SnoopSnitch and similar programs like AIMSICD (Android IMSI Catcher Detector) are for sure interesting programs - I have tried them both, but we have to be aware that IMSI catchers are already a pretty outdated concept of mobile communication interception and much more stealthy methods do exist:

I tried both SnoopSnitch and AIMSICD on Open OS. SnoopSnitch works fine, but AIMSICD crashed my phone regularly. My guess is it’s an AIMSICD bug because otherwise the phone is running stable

Here are two links for people who want to dive deeper into two things you talk about;

SS7: Locate. Track. Manipulate. You have a tracking device in your pocket
Companies are now selling the ability to track your phone number where ever you go. With a precision of up to 50 meters, detailed movement profiles can be compiled by somebody from the other side of the world without you ever knowing about it. But that is just the tip of the iceberg
60 m. Watch here.

Baseband Exploitation in 2013. Hexagon challenges
Exploitation of baseband vulnerabilities has become significantly harder on average. With Qualcomm having grabbed 97% of the market share of shipped LTE chipsets in 1Q2013, you see their chipset in every single top-of-the-line smartphone, whether it is an Android, an iPhone, a Windows Phone or a Blackberry.
Watch here

Thanks for sharing this. Here is the link to the main website about RTL-SDR dongles (not only GSM related): http://www.rtl-sdr.com