Hi, I have several problems with fp1. The two sim cards are sometimes in searching mode, then the wlan can’t be activated. When I restart, then the sim-cards are doing and also the wlan works.

But then after a while I have the same problem again.

Now, one week later I saw, that the phone is sometimes rebooting.

And today, I’m not able to turn on the phone.

I tried with another akku, but I have no luck. I also took of the sim-cards and the storage card, but I’m not able to boot it again (therefore I can also not make a hard reset).

What spare part may be the problem and how can I fix this?

If you connect your FP1 to a charger, does it charge?

Luckyli, I was able to start the phone again and I could now make a hard reset. But before I wasn’t able to charge, when connecting with usb-cable.

So I’m not sure, if the hard reset is maybe solving the problem. So any advice is still appreciated.

Hard reset didn’t bring the solution. The problems are remaining. Both Sim-Cards are in searching modus. WLAN modus is inactive. I can’t activate it.

Maybe next reboot will not doing anything (I’m scared to reboot it).

Is there any hope for the fp1 (maybe replacing a part?).

Your best chance to find out which part is broken, is to go to #dic:testingmode and do a full test (beware, don’t do this in a public place, the sound test is like a firefighter siren!

It would be great if you could post a photo of the result.

I made the test before, but I can’t see what is wrong. SIM1 and SIM2 tests passed.

You will see my screenshot attached. 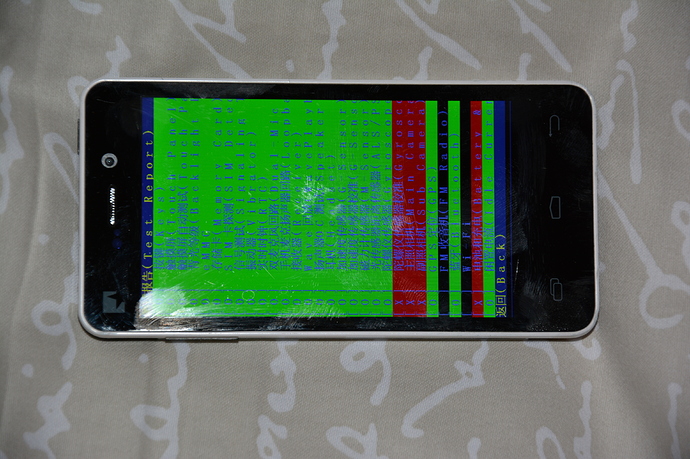 The battery isn’t the problem, even the test says that. Because I have a second one (respectively a second Fairphone 1). When I change the battery I have the same problems. And on the other phone, we have no battery problems.

At the moment, I’m not able to start the phone at all. Last sign of life was a blue screen… So I can’t run the test mode, right now…

Could it be the motherboard, which ist going to die? Or do I have to change the phone itself?

It’s most probably the main board (the test would also show red for the battery if it can’t be detected / the connection is broken).

Contact Fairphone and ask if they still have one lying around and if not, go to the #market .