It is with great disappointment that I discover that my FP1 became obsolete after only 2 ½ years. The
android version no longer supports the updates of the apps, so I am
obliged to change phone because no update is planned for FP1. Really disappointed…

My
phone crash minimun twice an hour, its use has become impossible, I had
to uninstall several apps, it is no longer a smartphone, just a basic
phone that often crashes.

no update is planned for FP1

I read this post but when will the update be available?

We can’t say yet because they are still trying to fix some annoying bugs (battery stats, GPS, bluetooth). It is in active development though (I myself am using the alpha version at the moment and it works stable).

Consider using your phone in safe mode for a while to find out if the crashes are caused by some third-party apps:

How to: Enter Safe Mode in Jelly Bean | Droid Life

If your phone is ever acting extra whacky and you can’t seem to figure out the cause, you may want to try booting into Safe Mode for a bit, an option included in Jelly Bean (Android 4.1). When entering Safe Mode, your phone disables all third party...

All apps will be temporarily disabled.

Have to say my old FP1 is working fine

although I dont use that many apps , still a firm FAIRPHONE man and will keep using my FP1 for as long as possible

The deadline is rather one week, one month, six months?

I uninstalled facebook and messenger but the phone still crashes

@urs_lesse the Facebook bug caused the app to crash, I think, not the whole phone.

When my phone crash I have to remove the battery and press more than 10s on the power button to be able to restart it.

When my phone crashes, the screen turns blue and blinks. I can not turn off it by the button

Wow that sounds serious. Can you try safe mode for at least a day / the next similar crash, please?

I can not switch to safe mode. The phone restarts without going through the safe mode menu.However, I followed the procedure

I succeded, my phone is in safe mode.

My phone crashes even in safe mode, although it’s less often. 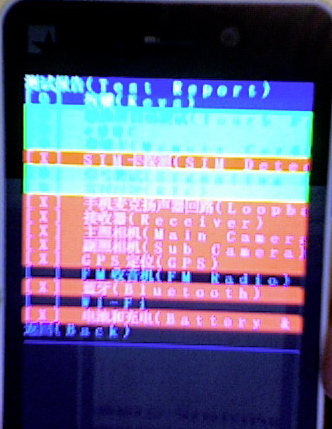 I attach the result of the self test in factory mode

I’m having troubles interpreting the picture; it is not very clear. What does work and what doesn’t?

I also do not understand why the tests fail because the cameras work for example. I can use my phone normally in safe mode, but it crashes regularly anyway. There it just crashes after sending an SMS

This sounds like a severe hardware failure. It seems that the crashes occur when the phone is trying to send data over the network (in this case an SMS). With more apps installed, if course the phone uses the network more often (thus more crashes).

To rule out a software issue, you should make a thorough backup and do a hard reset.

If after the hard reset you still experience crashes, I’m afraid your modem is broken (or something else too), which basically renders your motherboard useless.

The crash is not systematic. After booting safe mode, the phone can crash just by sending an SMS or using firefox. But for example at the last restart of the safe mode, I was able to use, firefox, mail, “clash royal” and other apps without crash. Today, my phone had to crash a dozen times in safe mode.

Oddly my phone now works normally. Although it crashed even in safe mode, since Sunday afternoon it no longer crashes in safe mode. So I put it back in normal mode, I reinstalled the apps I had uninstalled and everything is fine at the moment. I do not understand what happened. Either
a problem of false contact or a problem of humidity or condensation
because the problems started when the weather became cold.