###Submit, find and vote for feature requests in the official bug-tracker:

You can find them under “Enhancements”:

Bring back “Reboot” option when you long press the power button

Now, there is only a “Turn off” option.

Keep phone unlocked when it is in a certain Wi-Fi.

Android has no built-in support for keeping the phone unlocked in a certain Wi-Fi.

The app “Smart Unlock” used for that stopped working with Android 6.0.

So Fairphone should create a built-in support for that.

This feature request has its own thread, where also alternative solutions are collected.

Bring back the cut, copy & paste controls from Android 5.1 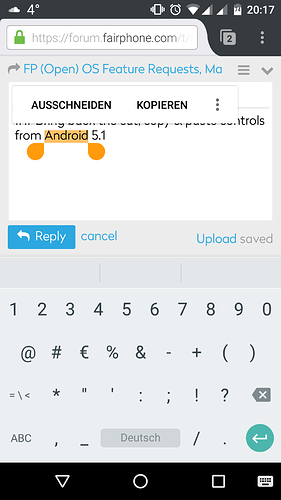 The old Android 5.1 controls were better. Also, they have a “select all” option missing in the new controls.

Smart unlock works, but it’s linked to connecting to a Bluetooth device, voice, or location. Google don’t offer an option for a specific WiFi so this isn’t a feature that can be supported

#Bring back the FP specific #features

AFAIK the plan is to release the (code of the) old launcher, lockscreen (widget, mood changer too?), … so the community can maintain them as Apps e.g. on F-Droid.
I just post this here as a little reminder.

This is a #wiki post, feel free to edit it clicking on the green :pencil2: above [details=Original post]Hi, I would like to submit the Fairphone specific apps such as the Fairphone Launcher, Contact Widget and the Clock Widget) to F-Droid so that these features can be used on Android 6 as well. The source code is accessible from code.fairphone.com (e.g. git clone https://code.fairphone.com/gerrit/fp2-dev/platform/packages/apps/FairphoneLauncher3). However, it is unclear to me under which l…

I know you can at least disable the most recent apps in the standard Google launcher, but I didn’t find the same functionality here.

###Submit, find and vote for feature requests in the official bug-tracker:

You can find them under “Enhancements”: