a. Do not click anywhere until the post has fully loaded. Best not even move your mouse, if on desktop.

Sorry for resuming this old post but I can confirm navigating and editing posts on FP with Firefox is terrible!!!
Hope this will be fixed soon

There is a topic discussing scrolling in Firefox Mobile further. It’s a very interesting read. Basically we found out, that it started after Firefox Mobile 32 and that it is caused by JavaScript (disabling Javascript renders the Fairphone Forum completely useless though…).

Thanks! Its very strange I found this thread regarding Firefox issues, but the forum didn’t notify me of new posts in the thread you linked the very same day

When I would like to open a thread the screen left white… Just the rotating circle…
And yes, some month ago the problem did not exist.

@Dosc You should check this thread: I cannot view posts on mobile when logged in. You most probably will find out, that this does also occur with any other browser you will try. The worst part of it is that there is no obvious pattern.

Thanks, happy to see I’m not the only one…

Me too, but I suppose (didn’t try though) this depend on the problem mentioned in the @Stefan linked post

The mobile experience of the forum is still not great.

I don’t have problems with the spam-popups. Also I can add users to recieve-field in a pm. I’m on Fennec F-Droid 39.0.2

Another weird thing I discovered though: 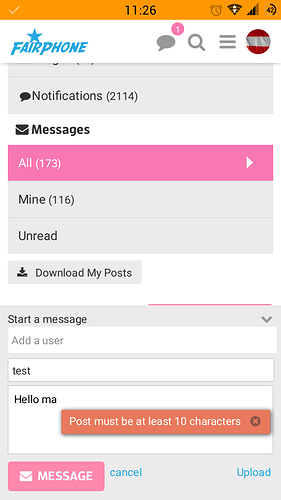 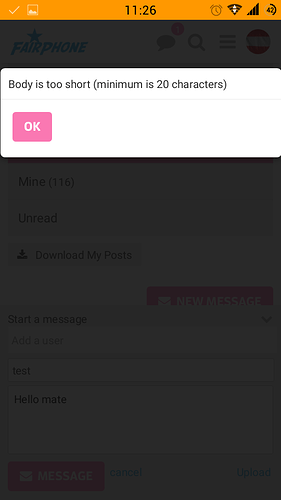 At first it is only 10 characters as a limit and then Discourse wants 20 again.

PS: I guess this is not a mobile specific. 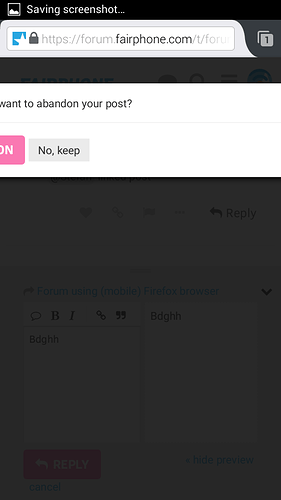 This is what it looks like when I abandon a post on mobile. The botton is still visible and can be used, but with other popups some buttons are hidden.

About the messages: If I hide the keyboard I can get to the field where I can enter a username. When I click into the field the keyboard is back and the field can’t be seen again. I don’t see what I type but fortunately suggestions pop up downwards so I can choose the recipient.

I can’t reproduce your issue. See my “abandon”-message: 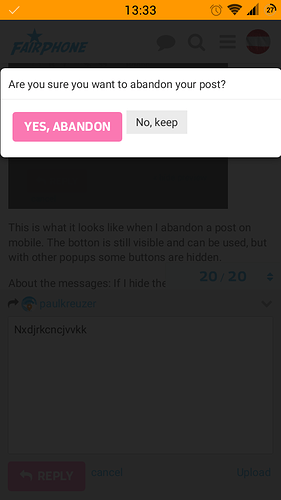 Edit: You know what’s your problem? You have “Desktop-site” checked in Fennec’s menu…

You know what’s your problem? You have “Desktop-site” checked in Fennec’s menu…

Nope. But whether I have it checked or unchecked doesn’t make a difference in that regard.
I just disabled all addons and tried again: no difference. But strangely after I disabled the addons and quit Fennec the keyboard showed up.
I also disabled all Xposed modules, just in case. Still no difference.
I’m using Fennec 40.0, but I’m pretty sure I had these problems before

Then press the hamburger icon and choose the equivalent of “desktop view”.

I can see from your screen shot, that you’re in desktop mode!

Ah you’re right! Much better.
Apparently there are 3 modes: 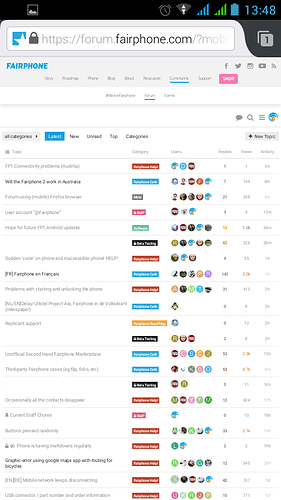 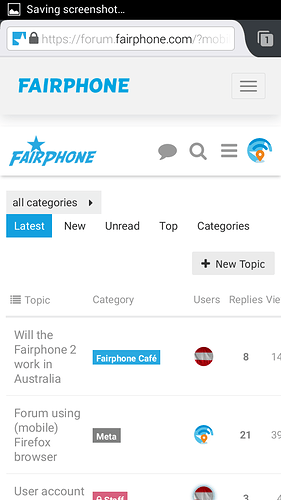 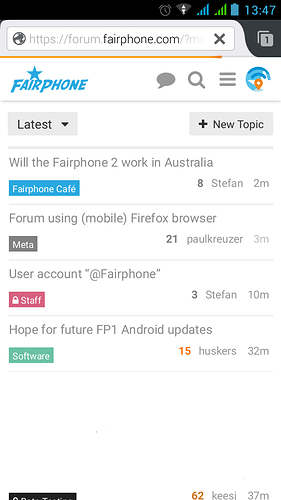 This one seems solved with the latest Discourse version:

I cannot view posts on mobile when logged in Meta

Hi all! I have an issue, which makes it impossible for me to be as active on the forum as previously. When I access the forum on the FP itself, I cannot view posts (I only get a blank page, even without the navigation bar on top). everything else can be viewed this happens in both Firefox for Android and the Stock Browser it is the same on 3G and Wifi I believe this started after the Discourse upgrade to 1.2.0beta3 when logged out, threads can be viewed. I strongly think this is related t…

As a moderator however I cannot move posts, when I am on the forum using Fennec F-Droid (mobile Firefox). The issue is negligible though, since it affects only moderators.

Alreade since the beginning of this nice new forum, I am not able to relyable COMPOSE any post at my FP1/Firefox (indeed Aurora channel), since the slow reacting cursor drives me crazy.
Having the FP1 in horizontol orientation I can’t even see what I am typing…

Unfortunately it is the same now witht the FP2/Firefox (Aurora channel).
At Desktop-PCs with Firefox I have these problems not!

A solution to this would be a hardware keyboard…

Maybe this helps: Markdown Cheatsheet (markdown is the formatting language used in Discourse).

There is also this thread:

Quote and smiling in the mobile version of the forum Meta

I often (mostly all the time) use a mobile device (Jolla phone, waiting for FP2) to surf the forum, so I ask why in the mobile version there aren't the function to quote a message and to insert a smiling. Can you improve this aspect for all the people that use mainly the mobile version? thanks

Note: Insert emojis works in the latest Discourse version, if you click on the smiley-button. The drop-down, when you start typing a colon, does not work however (as I stated here).