What happened so far
Bought FP2 - works fine (minor glitches).
Did all the FP2 updates - most glitches vanished.
After about 3month got problems with screen, becoming more severe every week (about one stage per week -> see below).

If I gently pressed the phone from left and right (the way I usually hold any smartphone in my left hand), all the above might occur.
<image (cannot upload more thant one as I am a new user)>

If I smoothely pulled the back cover from the screen either left or right, the screen immediately went dark. 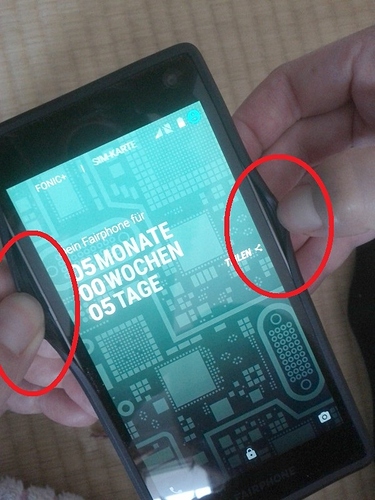 If I pushed the screen in the middle with a bit of force (I am a rather careful person), everything was good again!
<image (cannot upload more thant one as I am a new user)>

At this time I was quite unhappy with my FP2, I switched back to my old Nexus for daily use and started looking for help in the forum.

So many people out there having problems with the screen…

Solution
As I stated above, I was able to influence the behaviour of FP2s screen by gently pressing left/right or the middle of the screen or by pulling the cover from the screen a bit left or right.
So I figured it was a hardware problem rather than a software glitch.

I removed the screen part and cleaned it (as stated in “Solutions for FP2 blackscreen issues”).
No result.
I tried it again and cleaned the contacts thoroughly with a soft cloth and a drop of anti static agent (I guess alcohol would do the trick).
It worked!!
<image (cannot upload more thant one as I am a new user)>

Until now
I started using the FP2 again. Now, about one month later the screen starts flickering again. I hope it does not get any worse!!! If so, I will try cleaning it again. Perhaps someone else had similiar experiences and would like to share their solution??

So long story short: The #blackscreenguide works.
I’m closing this as we have enough #blackscreen topics already.