Hi All,
waiting for the fix I have another possible solution: AFWall+.
Some days ago I received an MMS but wasn’t able to download it and I discovered I had an active profile in which the Messaging app was blocked, after enabling it I was able to download the MMS so this could be an alternative solution, I suppose

Great work! Really like the idea that advanced users can install the fix manually. This way we will also be able to provide feedback on the fix in an early stage.

Like @ben said I think that the Fairphone will be one of the earlier devices that receives the fix.

4 posts were split to a new topic: Phone constantly in safe mode (stagefright?)

any news when the download link will be available?

Some of us in the beta release has an update pushed out but it breaks root access we think, so we’ve set the FP software team back on the case.

No update from them on this as yet though…

We’re on schedule to publish the manual update by end of today. I’ll post here when it’s published.

The aim is to have the manual update ready today, Thursday 13 August, to put in a support article. But we cannot guarantee that. I’ll be posting here later in the afternoon on news. Thanks for your patience!

I just downloaded and installed the software update. Everything went fine, the stagefright-detecor-app said “not vulnerable”.Thank you very much!

I also have downloaded and installed the software update without any problem.

Installed the update too and the Zimperium app showed “Not vulnerable”. 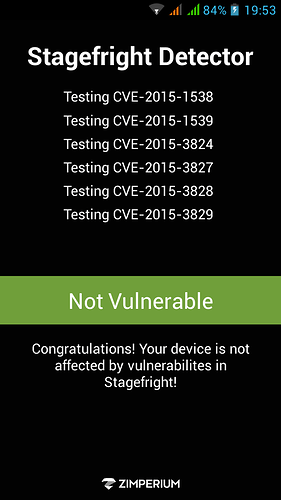 Thanks to the team for the swift action!

However I did see a very recent article on tweakers.net (Dutch techsite) about the fact that the original Android patch is not sufficient and Google is working on a second patch. Let’s keep our fingers crossed that it won’t be necessary for the Fairphone to provide a second path. I don’t know if the Fairphone patch is purely based on the Google patch or is different (and better hopefully

Update runs without problems for me, too. Unfortunately I cannot run the stagefright detector tests because I don’t use the Google Playstore.

I updated the title

It’s great to see that emojis can now be used in topic titles!

I am impressed, Fairphone achieved what the big companies fail to do.

To all Android smartphone manufacturers, take out your laptops and start making notes!
THIS is how it should be!

@DjDas Thank you! However, I rarely have WLAN access, so for me being able to download an .apk on my computer (from a somewhat trusty source

) would be even handier.

I started this thread 18 days ago and now that the software update Kola Nut 1.8.7 is available, I would like to thank all people at Fairphone who have worked hard to make this happen. Great work. It makes me proud of using a Fairphone.

Since the old Stagefright thread has been locked a couple of minutes ago, I created this new thread.

Now the question: does the update you’ve prepared (1.8.7) already include the amended fix for the vulnerability? Because there have been new developments, see http://blog.exodusintel.com/2015/08/13/stagefright-mission-accomplished/ for why the initial fix was incomplete and allowed for DoSing Android phones with the initial fix. Google has commited a revised/additional fix.

Thanks for clearing this up.

P.S.: Can’t link to the original thread, since I’m not allowed more than two links…

Thanks for the info. We reopened the thread and moved your post here.