There’s an app in F-Droid which may cover your usecase: Transportr

But easiest is flashing the smallest of the Google Apps package (OpenGapps pico looks small enought).

Your choose: freedom and privacy but complexity versus dependence and not-so-much-privacy but easiness

This topic indeed has been discussed multiple times but there are not easy solutions for your use case. By installing even a minimal set of google tools you give away the freedom you got by installing the open source version.

Ideally the thing to do is to convince NS and such that they need to offer their services for all users and not only users with a google account. You then also need to convince them to not use google specific interfaces and we need to offer a way to keep things up-2-date for the user.

If this is not possible I can think of two alternatives:
-Use multiple accounts on a single phone (one that is a google account and one account that know nothing about the google login). It would be very nice if it where possible to disable gapps on the second account

-Use a second phone (or tablet) where the apps are being downloaded and copy over the APK files: this is what I currently do: I use apk backup to store my apks on a server (seafile) and install them on my “free phone” (arguably not everybody has access to a second phone).

I am wondering if something like Evozi’s APK Downloader is an alternative, considering malware etc.?

Update: I rewrote this because it looks like it caused misunderstandings @keesj.

There is no “without” Google for these apps (your phone still talks to the Google servers), but you can make these apps work and also remove the Google services on your phone. Technical, using mircoG and Raccoon should also work. I tried it and it looked okay. Only the real time map is pretty slow.

You can use a lot of apps on your phone without Google. But apps the were build with the Google services framework and that do not offer a fallback, still need the Google servers to function.

@keesj and @fp1_wo_sw_updates thank you both. As I have Linux (Fedoria) on my computer I love to have Fairphone Open Source OS on my Fairphone.
Hopefully the tests are succesfull and the release is soon there.

I have used many tools on my phone without having a google account, this include apps like ov9292 or similar. Stating there is no ‘without’ google is not true.

The only thing I can think of is the captive portal check, which IIRC uses a google server to check internet connectivity.

I have used many tools on my phone without having a google account, this include apps like ov9292 or similar. Stating there is no ‘without’ google is not true.

I was talking about the software @Lidwien is using: NS reisplanner
This app is using the Google framework for maps and messages.

Stating there is no ‘without’ google is not true.

I’ve never said that. Or lets say I did not said it very well. I was still talking about apps the are using the Google framework. This is what makes it hard for the users.

I’m sorry for the confusion I caused. In this case I was mainly talking about apps the use the google services framework for maps and messaging. In this case particular I was talking about apps like NS reisplanner. Apps like this one talk to Google services to be able to fully work (They look up were you are, embedded Google maps and uses the Google messaging service). But the programmers could make them also work without Google. But often they do not offer a fallback mode.

This makes it hard for the users. They only “see” that their app is not fully working.

I am wondering if something like Evozi’s APK Downloader is an alternative, considering malware etc.?

Evozi downloads an app for you (you have to trust them that they don’t include malware in the apk you get). It is no substitute for the Google framework/services these apps use for maps and notifications.

I’m pretty lucky that the app, I use, at least doesn’t crash, when I click “map”:anachb (Austrian public transport, downloaded through Blankstore). I don’t have Google Services installed (so the Maps API is missing too), but when I try to view the map, there is “only” an info, asking me to install Google Services: 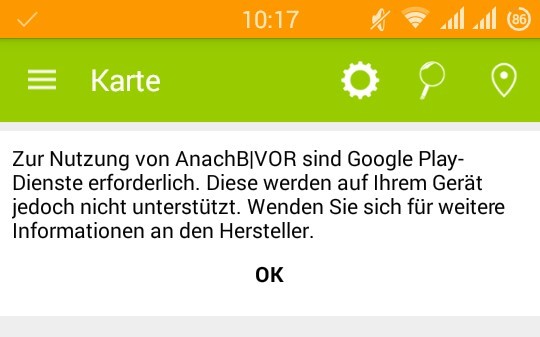 I have contacted some app developers about their apps: “Why can’t I download your app outside Google Play?”. They always answer: “Well you just need to install Google Play on your device.” Once they even sent me a link to a Fairphone support article about installing Google Apps…

I understand app developers in the sense that they seek to keep their apps up to date. I favour the way Whatsapp does it: Whatsapp can be downloaded from their website and can update itself. (If they only could implement a notification policy with less wakeups, similar to GCM…) Of course it requires more programming skills to replace features of the Google framework with own services.

PS: I’m adding @werner_noebauer to this discussion. His company has stopped uploading their app on their own website in favor of using Google Play. Maybe he can share some insights.

As a travel planer i suggest Öffi. In my opinion one of the best apps that exists!
Doesn’t have the same coverage in all countries, but i think it has the most data-sources of any travel planers.
There are versions for phones without Play Store, Maps.
Theres also a f-droid repo!

One of the few apps that i really miss on sailfish os at the moment.

The problem with providing an app without a store is, that many users do not update their apps on their own and you have to integrate an update notification service. So if you want to provide an “uptodate” app it’s easier to use a store e.g. Google Play Store. Therefore many companies provide their apps via stores.

I’d also suggest to take a look at https://microg.org/, which is a privacy-defending open-source replacement for GAPPS.

I am very happy to see the Fairphone taking the road to software freedom for all its users!

I have a few questions:

A post was merged into an existing topic: Fairphone 2 Open Source OS is available

Let me put that in perspective: not a single smartphone in the market (including Fairphone’s) comply with the four freedoms of libre software that certification requires.
Although FPOS-OS is open source, having blobs in the kernel is the main problem. It’s so hard to push SoC makers (i.e. Mediatek for FP1, Qualcomm for FP2) to release the code their chips run, and even open sourcing them is not complying with that program. The freedom to read the code is only one of the four freedoms of libre software.

That said, Fairphone has proved to know how to push the limits so far, mainly for fairer electronics, but releasing an (near-full-)open source system too. A fully open source Fairphone <n> would be great, and a fully libre Fairphone <n+m> would be awesome and superb. But it takes time, work and money. Let’s support and help Fairphone until then,

It seems to me that you are addressing Fairphone in your post. The forum is not an official contact channel of Fairphone, and they do not read each end every post. If you want to make sure to get an official answer, you have to contact them via the contact form.

Thanks, I will use the contact form as you suggest.

Name contest for the new OS is over

The decision in indeed final, but we can leave the topic open to discuss it further and if people have questions about the decision.

I’m fine with all names, they are just names. But it would be nice to have some goals for the OS written down somewhere. Else it is just Android without the Google services … and that’s pretty much what Google offers anyway.

To apply the Android litmus test: How will you deal with patches that will modify standard Android behavior? Same for mainline kernel GPU drivers and other stuff. Qualcomm and Freedreno also comes to mind.

Unified NLP for example needs some very small modifications in config files, other bigger patches could follow. This could conflict with the goal to have two OSes, with the other ‘just’ without google services.

4 posts were split to a new topic: Will these apps work on Fairphone Open OS?