Today we launched Fairphone.com in three new languages: Deutsch, Français and Nederlands!
You can click on the language icon in the top right corner to change the language. If you come to the page it will also automatically adjust to the language settings of your browser. 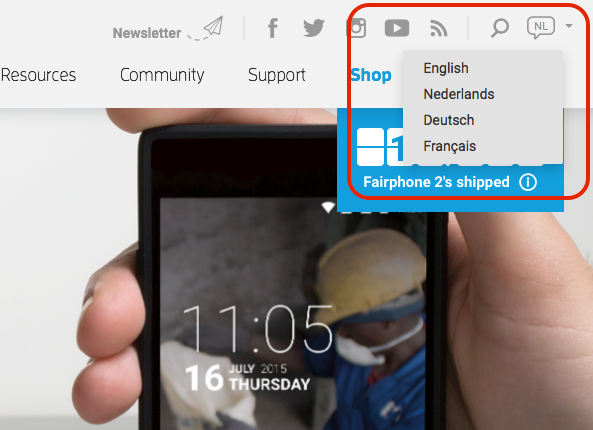 With this we hope to cater to the needs of our diverse community. Not all pages are translated yet, we did the most visited ones first and if proven successful, we’ll do the rest as well. Also we hope to expand to more languages in the coming year.

We are also thinking how we can open up the translation process so the community can help to bring Fairphone information to more people. Maybe a tool like Transifex could help with this.

But for now, if you happen to spot a mistake, or if you have doubts about a translation we’ve chosen, please let us now!
@katie (who manages the translations) will be very happy to hear!

When I choose German as a language and I click ‘Resources’ (example which is not translated), and then navigate back to the previous page, the language setting is reverted back to English

It’s great to have different languages!

In the short time testing this, I’ve recognized the following issues:

If you come to the page it will also automatically adjust to the language settings of your browser.

That’s not working for me yet.

Great Idea !
I see one problem so far, the "community page is not translated yet, no problem, but you could rename the “comunity” tab in “Communauté” for the French language !

Well, you did ask, so here goes: The German translation as a whole is subpar. Now don’t get me wrong here, I’m not blaming Fairphone, nor the translators, because I’m painfully aware of two things: a) UIs, including websites, are often built without translation in mind, and b) I’ve dealt with my fair share of customers who will actually turn down an idiomatic translation because “it doesn’t look like the English I learned at school”. Now I’m fairly certain that Fairphone is not like this, but for many translators delivering an inferior product has simply become the default modus operandi. It’s just so much easier than explaining over and over why “you can’t say it like that.” And I don’t mean this as an excuse, just a possible explanation.

For starters, the translation is superglued to the original syntax and wording. The translators played it pretty conservatively all the way and I can’t see a single attempt to paraphrase (haven’t read the whole website, mind you). Unless you get some distance from the source text, your translation will always sound stilted, and that’s not good advertising for your brand (I know, I know, the website is not Fairphone’s biggest USP, but still, it’s unprofessional).

Speaking of wording: We’re talking smartphones. “Telefon” and “Mobiltelefon” are words from the olden days. This is not the right register for either your product or your target group.

The next one is actually one of my pet peeves, because it illustrates a very common i18n issue:

Your variables are all over the place. And quite possibly the syntax is also hardcoded with the variable at the very end of the string. That’s a no-no ;).

All in all, the translation made me cringe more often than it did not. Just like the German screenshots of that lockscreen widget, but I understand that’s a third-party thing.

We are also thinking how we can open up the translation process so the community can help to bring Fairphone information to more people. Maybe a tool like Transifex could help with this.

I’m not sure I fully understand what you have in mind. Crowdsourcing translation? I don’t think that’s a good idea for a corporate website, and that’s what it is. I think you should be in control of your style guides, TMs and ultimately the whole QA process and work closely with a few select freelancers for the best results (or outsource it to someone who can deliver the whole package, if you must). Plus fair work deserves fair pay ;). That also goes for professional translation. I have yet to see a crowdsourcing approach to translation that does not compromise on either quality or fair rates. Scratch that whole thought if that’s not what you have in mind

. Or proof me wrong. It might just take off and that would actually be pretty exciting.

I’m not familiar with Transifex. It might be a good means to your end no matter the approach. I’m too tired to read through their whole website though. I need my weekend now. The live demo you can watch on their website is pretty scary though. I’m with the faction who believes that PEMT is the devil (that’s post-editing machine translation). This may not be true for all types of text, but it’s definitely true for marketing speak.

Anyway, sorry for raining on your parade like I did. One of these days I’ll have to start a Fairphone Appreciation thread where there’s no room for negative vibes whatsoever because that’s the kind of thing you folks deserve to balance the constant nagging about the odd hiccup. So to end this on a lighter note: I love you Fairphone

And kudos to @Katie (and probably other members of the team) for the excellent job you do on the English-language website.

Incidentally, is this a PEMT job? I think you can scrap all I said about frustrating customer-translator relationships. A cheap PEMT job would explain a lot. Also why you’re just testing the waters with a few snippets and asking the community to “point out mistakes”. For what it’s worth, you should remove the translation and think it over. Take it from a fan

Well said, stephan. Didn’t think I would find something like this in a forum not belonging to translators. I must second it. My German is not good enough (or bad enough) to judge what you say but I can imagine the results.
Croudsourcing is great when the crowd is the owner of the source, but when the company is in other hands, croudsourcing can be compared to adjectives that probably aren’t allowed, so yes, you should be considering professional translators.
I know it can be expensive if you have hundreds of pages, but just imagine, the wall in China was built little by little and see how long it is. With patience you can have a great website, and foreigners will be gratefull for the care you take in developing good translations. Some clients don’t forgive a company when communication is difficult.