Fairphone and "The Responsible Business Initiative" in Switzerland

I kindly ask for a clear supportive statement of Fairphone.

Switzerland has a referendum on “The Responsible Business Initiative” in November which wants multinationals to respect human rights and the environment in their activities abroad. You can find more information here: https://corporatejustice.ch/about-the-initiative/.

Politicians refer to Fairphone and a statement of Bas Van Abel to fight against the initiative. Fairphone should react immediately to such tweets, clarify this misunderstandings and support the initiative. There are companies which are supporting it as well. And Fairphone claims to be an industry leader. It’s time to prove it! 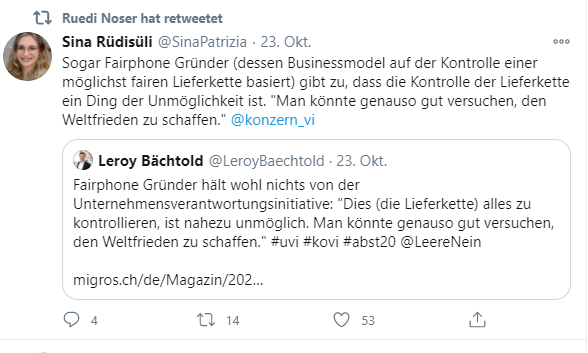 My German isn’t that good, I hope I got the tweets right. Just sharing a thought.
I don’t think Fairphone never claimed to be 100% fair or sustainable, but the claim to be (1)better then the industry, (2) willing to improve. They started to address the conflict minerals issue (4 material), they then added a focus on working conditions in the production, they added fair gold, they added recycled plastic. There are still lots of minerals, materials whose supply might have issue we don’t know of. You can hardly build a fair and sustainable supply chain in one night, you need time.

I fully understand. But we are not talking about being 100 % fair or sustainable. This initiative aims to introduce a risk based mandatory human rights due diligence instrument for companies according to the UN Ruggie principles. So - why for heaven’s sake - should this be an issue for Fairphone?

If this is important to you, please send Fairphone an email (and maybe cut down on the demands and the capitalisation of words) - this is a user forum, FP staff don’t necessarily read the threads here.

Aside from that, I think that while this initiative is admirable, its wording is too weak to be effective. I’m sad to say I’ve read their entire initiative text, and aside from referring to “harm” and “due diligence”, there isn’t much in there that’ll keep companies from using unethical suppliers - after they’ve instructed their lawyers to write some copy about how we can “strengthen respect for human rights and the environment through business” by installing suicide nets in Chinese factories.

That tweet by Leroy Bächtold has a couple of interesting responses under it, and once you read the article it links to you can read the entire paragraph that quote was taken from:

This is a community forum and I thought other community members, especially from Switzerland or Germany, could be interested in such topics as well. So, relax, no reason for you to be rude. You can be assured that I am not getting my news off Twitter. If you don’t want to comment this topic, then just don’t do it. Nobody forced you to read this.

But I do want to comment on this topic!

I did not suggest emailing FP to the exclusion of posting about it on the forum - but either way, you cannot be surprised at getting a bit of pushback when you post a demand like yours, including allcaps and exclamation marks, accompanied only by a Twitter screenshot.

That’s a far more reasonable statement than the one in your title, and far more straightforward and easy to understand than your initial comment. I’m all for it!

So, relax, no reason for you to be rude.

Well, acutally you were rude in the first sentence of your post already.

I demand a clear supportive statement of Fairphone NOW.

“Demanding” something without having a normal conversation first doesn’t get you anywhere. I am pinging Fairphone’s community manager @rae here, maybe she can help you. But please remember to stay polite!

I am not on Twitter and I can’t speak for Fairphone.

This was meant to be a request and an impulse for community discussions.

And it is obvious that English is for many people here (me included) not the first language. So please treat this as a polite request and let’s put the semantic sophistry aside.

The question behind is interesting tough. Does Fairphone reacts or comments policy discussions in Switzerland and Germany (https://www.derbund.ch/deutsche-regierung-streitet-ueber-die-konzernverantwortung-120614842711). Does the Fairphone movement wants that Fairphone is actively supporting these developments?

Thanks for your support. I have removed allcaps and exclamation marks, hope this clarifies my point.

This was meant to be a request and an impulse for community discussions.

I guess your edited thread-title does so much mare to achieve this.
Thanks for this!!

I understand your motives, but an official statement from Fairphone here would probably have to be considered an interference in Swiss internal affairs. Also, others have already mentioned that this is a community forum with no official involvement from Fairphone.

'I've noticed some of my comments have been taken out of context and I'd like to clarify what I meant' https://t.co/Aen6uO4eV3 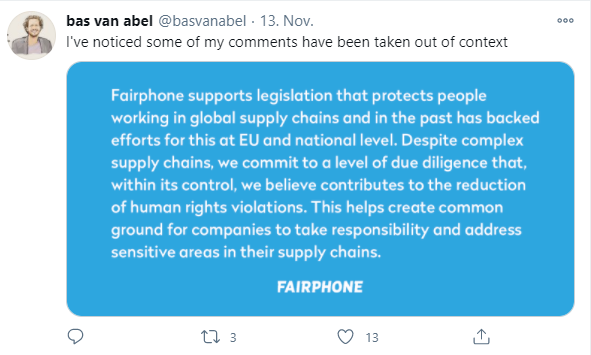