Fairphone 4 better for money and environment?

the Fairphone 3 is four years old.

Not quite 2 years yet

one of the goals of Fairphone to minimize the number of phones going to landfills? How does that work when someone has to buy a placeholder phone just so they can have a newer phone until a new Fairphone is released?

The goal maybe to encourage people to think about it which may bring about some reduction, which I am sure Fairphone are achieving. There can’t be a goal to minimise as that would reduce to nothing.

No one needs to buy a phone or a placeholder so they can have a newer phone, they can wait. It’s not Fairphone job to persuade people not buy other phones but to provide alternatives, which they do.

The emphasis is more on what the individual wants rather than what Fairphone provides. All the arguments would still exist if there was no Fairphone. There are phones with phone plugs and removable batteries replaceable modules etc that you can buy in the USA and some that have taken a step towards being Fair to the miners and manufactures, so Fairphone is not such a big deal.

The discussions are great but if someone wants a phone they will buy one depending upon what is attractive. The only thing about Fairphone that is is the Fairtrade aspect to me, the rest I can get otherwise.

Fairtrade was and still is the guiding light for consuming, not specs or looks.

I’m well past my support days, age old specs, a bit rough around the edges, definitely not what you want see see hanging around with on the dance floor, but I like to think I can be fair.

My brother and friends laughed the first time they have been seen my old fashioned FP3, but day by day (and after a bit knowledge of Fairphone) they started to look at this little brick with a friendly smile. “I’m the guy with a Eco/Fair-Phone” XD

The first person to comment to my daughter when they saw her phone was “OH! is that a Fairphone” and before my daughter could answer out came “I heard they are crap”

My argument will always be, what isn’t, but this is fair crap

Simple statement: I have never thrown away a phone, because of old software. Or I found a way to destroy the phone/ lose it or im still using it. This time I succeedee to have a phone of 4 years with android 7. So i want to say that I dont have problems with software support of Fairphone. And if it becomes to old and the banking app dont work anymore I can always flash a custom rom

The Apps are still running, but how about security? That is the main point. Android 7 gets no updates for a long time. This is too risky for me.

Android 7 gets no updates for a long time

Can’t work out who or what you are responding to:- FP2 is on Android 9 and FP3 soon to be moving from Android 10 Android 11.

Did you read FP1 somewhere

I actually think, what they are doing atm is the way to go:

but I also agree with you:

I also don’t 100% agree that passing your phone on when buying a new one automatically helps in waste reduction. What if the phone of the one you pass it on to was still working fine, but is not worth passing on or selling as second had anymore? Then that still created one phone going to the pit (ideally the recycling center’s pit), which could have been used for another year or so.
Not saying there are no people out there in dire need of a new (handed down, used) phone (much better than their current dying one)

I get the point expressed above that if hardware support time equals release time, there’s a window of time when it’s a difficult choice to buy.

However, instead of releasing hardware more often, I am for a longer support.

I am aware that longer support is tricky when it comes to missing processor features, lack of upstream support, and alike. But we should push these limits against Google itself, against Qualcomm as @Frasier says, and work hand in hand with firmware developers, or with alternate OS maintainers, like a Linux-based that breaks this stupid logic of 1 year - 1 nightmare OS upgrade.

This is too fast. We shouldn’t accept so many non-features like super-IA cameras, dangerous connections with robotic cars, and a handful of design tricks that makes us have location and data connection always on. I mean, we get this “in exchange” of obsolescence. It’s a lose-lose for me.

Granted, those antifeatures are fancy, cool, “comfortable”… but ultimately they are imposed to us. They come from market studies and the will to makes us more dependant, instead of from a will to solve in the simplest and “cheapest” way our humanly needs.

If Fairphone is to have any kind of significant impact on the smartphone industry, they have to be able to attract customers who aren’t willing to buy a phone which is over two years old. And that’s most folks. Most folks don’t want to buy a two-year-old phone.

It depends upon what environment you are considering, yours, the planet or the workers. I agree that in the first two cases zero, but for the miners and manufacturers it will help with better wages.

Fairphone’s creation, before phone were marketed was to have better (more fair) sourcing of materials, this in theory would relate to better environment for all but unnoticeable for 99.99999% of people.

I have land and allow nature to develop, so wild animals and trees can grow. I benefit the most from developing the ‘soul’ others from a few extra molecules of oxygen.

So whereas you are right, it’s not the big picture.

You may like to read the recent Impact report the Fairphone put out.

I just realized, that the Impact Report v.2 is offline. Since July there is a new Fairphone Impact report online. Interesting read (at first look; since I haven’t had the time to read it yet).

FWIW I’ve had my FP2 for over 5 years now and it’s still going strong (yes, I replaced the case early on because the early ones cracked, I replaced the camera modules when the upgraded ones came out, and the battery when its performance became too poor). I don’t intend to replace it as long as it is functional - hopefully another 4-5 years! From my POV, if it dies in 2025 and I have the choice of a 2-3 year old FP5 or a new unfair phone, I’m most likely to buy the FP5, on the assumption that I’ll be running it until long after it becomes obsolete anyway.

I am aware that longer support is tricky when it comes to missing processor features, lack of upstream support, and alike.

It is not just that, but support needs to be paid somehow - the front line customer support folks, developers, project managers, etc. That money comes from either selling new devices, which will get hard if the hardware gets older and people start looking somewhere else for a more up-to-date phone, or from higher prices, to pile up money for the long support period while no (or little) new cash comes in.

I guess that’s the reason why more and more software companies don’t sell their software, but use subscription modells instead.

I guess that’s the reason why more and more software companies don’t sell their software, but use subscription modells instead

True. And Fairphone piloted this a bit for businesses, but it seems to have gone nowhere noticeable.

From ownership to service: A new Fairphone pilot just for companies The Industry

Originally published at: https://www.fairphone.com/en/2018/01/08/from-ownership-to-service-new-fairphone-pilot-for-companies/ It’s perfectly normal to rent an apartment. And plenty of people lease cars. But would you ever consider doing the same with a phone? What would the ideal business model be? What are the benefits for Fairphone and our community? That’s what we’re working to uncover with our recent research and a new pilot project. A circular approach with a focus on service When we star…

but is not worth passing on or selling as second had anymore? Then that still created one phone going to the pit (ideally the recycling center’s pit), which could have been used for another year or so.

Hi, totally agree with you. That is the point.
The slight difference beetween Fariphone and other Manufactures was and I hope will be supporting our customers with sofware updates and upgraded modules in order to keep away the need of new phone. This is the reason why I think is too early for a new FP4.

Agree with @amoun about the Fair state of Fairphone’s but we should not separate Fairtrade and sustainability … both of them are the fundamentals of Fairphone belief. So many posts were published about waste, circular economy and recycling programm and many others about working human conditions.

As a Fairphone user I’d love a FP4 but as my FP3 has only 1 year I don’t need a new phone and I don’t expect anything like that from Fairphone.

New users should be attracted by the philosophy of this company rather than the tech rush of the new model every 2 year (and someone will say I’m dreamer … but that’s OK).

I had my FP2 until recently. Passed it on to other half who only uses it for Whatsapp andsome very basic web brousing on and BBC Sounds and uses an old dumb phone for any phone calls and texting. I gave it up because even after software update and following all the ideas I could find here to fix it, I still kept getting lots of random reboots and it would overheat while using googlemaps as satnav meaning I could end up at a crucial point losing the help I was relying on.

So far FP3+ has worked without problems and the camera is such an improvement! Pretty certain I will keep on using it well beyond the five year point.

What I would love to know is, if there is any way to upgrade my FP3 with parts from FP4.
Wouldn’t that be the most sustainable way?
My FP3+ is only about 9 months old and the only thing I wish to upgrade so far is my camera. Will there be a way to upgrade to FP4 camera without needing to buy the whole FP4 model? I want to use my FP3+ as long as possible!

No, that is most likely impossible. The module itself doesn’t fit at all. Wether Fairphone will, built a FP3 compatible module with the same specs as the FP4 camera? I don’t know, but I wouldn’t bet on that.
But maybe the FP3+ camera isn’t that bad, did you try other Apps, like Open Camera or one of the Goggle camera ports?

I guess the only realistic option would be to build an FP3 camera module with the main sensor of the FP4 camera. There just in no physical space in the FP3 to contain a second sensor. They said how hard it was to even upgrade to FP3+ because of the restriction of keeping the same dimensions.

Edit: to make it more clear, compare these two images and keep in mind that the phone itself it roughly the same size.

FP4 (the camera module is the large one at the top) 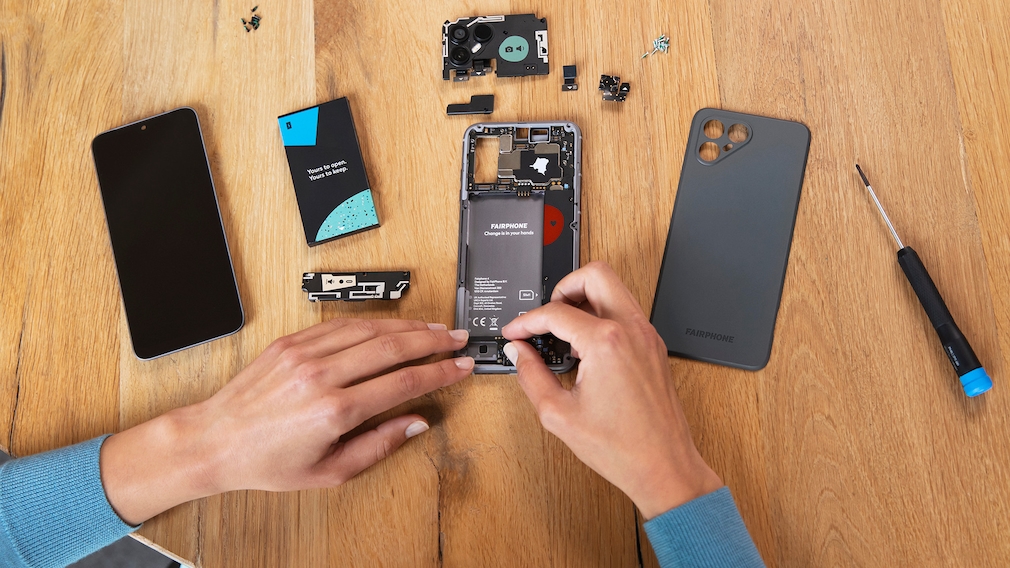 I’d say the FP4 module is around 3-4 times the size of the FP3 module. And that makes it pretty obvious you can’t have an FP3 upgraded camera with the same specs.