I must have been blindfolded, at least partly. The SD 632 actually has four Kryo Gold (i. e. out-of-order) cores. It’s only disadvantages are USB 3.0, a weaker GPU, a slower modem and slower WiFi. I could easily live with that.

Just to clarify one thing, that is also found in the spec sheet I linked earlier: Qualcomm allows phone manufacturers to pick and match certain features in the SoC based on the price they wish to pay for the SoC. Consider some features (like .ac WIFI or the set of supported LTE frequencies) optional extras the same way you can pick optional extras when you buy a car. Generally features are enabled/disabled by means of dedicated firmware or through one-time fuses that Qualcomm pops to disable features the customer hasn’t paid for.

Why I bring this up is because it is another reason why different phones with equal SoCs could still have different specs. Not finding a phone with a Snapdragon 632 and 802.11ac wifi doesn’t mean the SoC can’t do it, but perhaps manufacturers just didn’t want to pay for the feature because few consumers really ask for it. Seeing a certification for the Fairphone 3 doing LTE in “category 7” is a strong hint that they will use SDM 632 SoCs in the next phone, but it could also still be a 636 for which FP didn’t pay the license fee required for cat 12 support.
Until Fairphone confirms, there’s insufficient data out to give any guarantees on the exact SoC… but the WIFI and LTE certificates do give valuable information on the final specs of the phone, which in the end matter more than the version number stamped on the SoC.

See …
all the same identifier but quite different identities

Even the given MHz values are differing between 1612 / 1804 / 1843.
Whatever is identified by this term, it’s not the processor as such. At least it seems to be a qualcomm snapdragon 6xx all the time.

I excluded everything which didn’t fit 1.8 GHz because the 632 I saw with 1.8 GHz had very similar performance.

The Xiaomi Mi A2 and A3 have better memory bandwidth. The A3 furthermore, has better performance as well. 660 is out of the question.

The Motorola Moto G7 you linked has very similar performance as the FP3 which further supports a 632 narrative.

I did not mean to imply anything else.
I am actually really convinced already.
I just wanted to show, that this term does not help to clarify anything.
And maybe someone has any idea, what this identifier on geekbench really identifies?

The following is related to this topic of discussion only in that I’m interested in the financial success of the FP3. Basically it’s a meandering reflection on how consumer trends, product placing and brand image could affect future market share. I want Fairphone to do well and I want their consumer base to grow. I’m getting increasingly exited about their new product release as the clock ticks down.

So how do you satisfy customers’ wants and still stay loyal to your own ideals? I don’t have the answer myself. The mainstream market trend is for slim, aesthetically pleasing and submersible smartphones. Wireless and button-less is also an increasing trend. Big companies set the trend to some extent and have very powerful marketing machines. The kind of device you display on your desk could suggest for instance that you are successful, professional and artistic. That’s important for some people. The manufactures themselves might think different[ly] to their customers of course. I’m not naming any names! Then there are so-called rugged phones, that seem to revel in their own ugliness. For sporty and adventurous people I suppose. What does that make ethically and ecologically responsible products? Boring? For boring people? But there’s another category, albeit a niche category: industrial electronics. For businesses. Companies pay a premium for products that are built to last and have good client support. The only product example I can think of now is Compulab, but there are lots of them, and businesses know about them. And I’m sure Fairphone knows about this market sector.

But for the rest, those manufacturers that don’t set the trends, I’m sure it must be frustrating have to follow customer trends and stay afloat. I’m sure some of them have concluded that customers are idiots. I imagine their engineers are more than capable of making superbly built products but then either not enough people would buy them, or else they wouldn’t upgrade them as often because they wouldn’t need to. Maybe they make two very different product categories for business and consumer clients.

Anyway, whatever Fairphone does, I’m pretty sure they know better than I do what they’re doing. The next product looks like it won’t have top-tier processor. Their loyal customer base aren’t as susceptible to marketing ‘gimmicks’ as are other consumers, as one commenter here so accurately put it. I’m bracing myself to have some of my expectations dashed when their product is revealed, but I’m willing to compromise. They’re worth it. The FP3 will not be a flagship phone aimed at an elitist consumer base. It might well put more Fairphones in peoples’ hands though. A lot will depend on how gadget websites receive it too of course. Maybe Fairphone will send samples for reviewing to some of the better ones.

I’m sure some of them have concluded that customers are idiots.

I have concluded just that some time ago. They really are - and that’s why there must be market regulations just for the sake of not drowning in our own - pardon - crap.

Very well written, I agree. The best thing is, its not about being the owner of a flashing flagship phone.
You don’t buy a phone, you buy into the fairphone vision of a better world.

You invest in world changing values.

I agree for the ethical “low tech” aspect, however wouldn’t a higher-end processor, RAM and other specs make the Fairphone last longer, future-proof, thus being a more sustainable option?

I have had three different core modules (because of different issues covered by the guarantee) since I first got my FP2 in January 2016, and it still gets slower and slower with time (despite hard resets)… Would it be because of software updates? Anyway, remember Snapdragon 801 and 2 GB of RAM were already slightly outdated, not to mention Android 5, when it was finally released in December 2015…

A few examples of the consequences on my FP2:

And I haven’t even mentioned the other modules’ issues which will probably be solved with FP3:

… etc, etc… If this was not Fairphone, I would call it planned obsolescence!

That’s why I really hope for a very good processor, RAM and graphic capabilities for FP3, as well as pure Android interface to have the updates ASAP. And even though I hesitate for social and ecological reasons (as Fairphone, despite being probably the best in this industry, is far from being 100% Fair and sadly cannot really be Green), after almost 4 years of hustle and stress with my never-really-fully-working-FP2, I think I might upgrade for FP3 because I definitely can’t wait for FP4 with my FP2 in good conditions of use… Let’s hope FP3 will be more stable and trustworthy…

The SD 600 series is mid-range. Mid-range phones are “good enough” and affordable. High-end phones are better, but it is more difficult to afford and the difference isn’t worth it.

The PC industry has suffered from this problem the last 10 years or so. And because of its modularity you can replace a monitor if it dies.

The smartphone (and other gadget and mobile device) industry has figured that you want your products to eventually be not reliable anymore. Then the customer comes back.

A way to solve the issue, is a service oriented market. After I wrote that last sentence, I realize it is something Fairphone is going to go after. Not before (I forgotten about it).

A few more words about the mid-range phone. Yesterdays high-end smartphones are today’s mid-rangers (I’d est. it at 2 years). A mid-range smartphone gives a good bang for a buck and is good enough. Certain features are common nowadays on smartphones.

Going for a high-end smartphone with sublime quality, and making it fair, is going to make the product too expensive. Volume decreases, the sweet spot is lower. A low-end smartphone would compete with FP2 too much. After 4 years you want the successor to be a reasonable upgrade. So a mid-range smartphone makes sense, and perhaps in 5 years a low-end smartphone produced for the masses with fair tag, is a possibility. However the beauty of a service-based smartphone is that it is guaranteed to work well, and if you want to stop with the product you stop with the contract. So if after 2 years you feel like you wanna swap to something else, your hand-me-down is going to find a new host. Because the service provider will take care of that. The only thing left to discuss, is the price of such. Theoretically, I believe a service-based economy is a way forward, see for example this TED talk about the circular economy by Thomas Rau.

7 posts were split to a new topic: Camera taking between 1 and 10 seconds to be taken 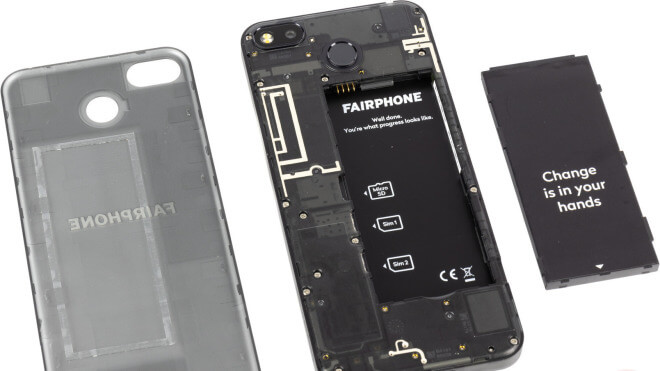 Great! Thanks. Originally the photos are from nl.hardware.info - And in my opinion the photos there are sharper than on winfuture. But see for yourselves: [EDIT2 - The site has been taken down

EDIT: USB-C it is

That looks like USB-C. Connector isn’t in the middle of the smartphone though. Bit odd.

What is this on the side here on the bottom? Looks like USB-C as well, but it is a speaker?

MicroSD visually confirmed based on pictures.

Also, easier to open the case, (see picture) so I suppose cases will last longer.

EDIT: Also the case is round on the back as well as the corners. That is nice for laying in the hand.

EDIT: One peculiar thing is that the hardware buttons are on the left side of the button.

That looks like USB-C. Connector isn’t in the middle of the smartphone though. Bit odd.

) that the bottom module was the faultiest module of the three “small” FP2 modules, from my impression mostly due to microphone failure. Maybe the visibly bigger distance between microphone and USB port in the FP3 helps to reduce the risk of mutual damage?

By the way, let’s welcome the return of “Designed to open” on the case! 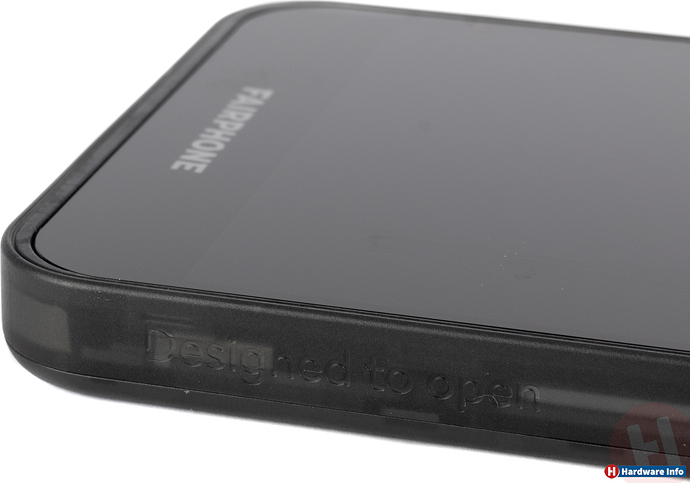 It doesn’t look waterproof to me

Seriously though if it’s not waterproof I think that’s a missed opportunity.

Should roughly translate to …

“It was leaked earlier that a Qualcomm Snapdragon 660 Octacore-SoC with up to 2.2 Ghz will be used in the new, once again modularly designed smartphone”.

Seriously though if it’s not waterproof I think that’s a missed opportunity.

It’s “designed to open” and there are holes and small gaps everywhere … not a big “if” in my opinion.
But … somebody invented waterproof smartphone bags you can put any phone into and still use it.

I’m mainly wondering, if they already plan to quickly move to Android Q. Would be nice, if we got a moderately fast update