Fairphone 3 only charges with one side of USB charger

My phone will only charge with one side of the charger, I don’t remember when I first noticed this though it was probably a couple of months ago, I didn’t originally think it was worth loosing too much sleep over as I can still charge my phone normally with one side, but it’s been gradually wearing me down as I don’t always remember to check that it’s charging when I plug it in. To try fixing this I’ve:

None of these worked, however after initially taking the phone apart the charging port seemed like it was working on both sides but after a couple of seconds one of the sides would stop charging again.

Does anyone have any ideas of things I could try to fix this (besides buying a new part)? Also sorry if this has already been covered I did try looking for other posts but I couldn’t find any. Thanks

Edit: added a couple of things as I accidentally posted this.

Hi Idk and welcome to the community forum

Just to be sure that I’ve understood the problem, can you confirm that it is as follows.

When you connect the FP3 to the charger, plugging the USB-C plug into the phone’s port, charging only happens if the plug is inserted a specific way round, and if you insert it the other way round (as you should be able to do), the phone doesn’t charge. Is that right ?

Have you noticed any other malfunctions related to the USB-C port (data connection for instance)?

The solutions that you have tried without success, seem to indicate that there is a problem with the contacts of the phone’s USB-C port. Unless you’re very knowledgeable and skilled with these components then you’re unlikely to be able to repair it yourself, though it’s probably just a connector that’s out of alignment. If you know a good repair shop you could take it to them, USB is standard so they should know what they’re doing.

If the phone is still under guarantee (warranty) then get in touch with Support as quickly as possible.

If you’ve had the phone for more than two years then I would advise you to order a spare bottom module from the online shop. You’re lucky, a new shipment of bottom modules has been received recently.

In the mean time, to be sure you’ve plugged in the “right” way round:

Thanks for your helpful response, your description of my problem is correct, sorry I should have been a bit more clear about that. I can’t recall having any serious problems transferring data, though I don’t do it often, I’ve just checked and it only works one side if that’s what you mean.
From past experience I doubt I’ll have much luck with repair shops as in the past I needed something doing to an old phone and was told they only did screen/battery replacements
I bought my phone from a phone store and from what the warranty page seems to say, it’s their issue so I’ll be going there sometime next week. It’s a shame I didn’t remember the warranty myself as the phone is only about 8 months old.
Thanks for the felt tip suggestion it sounds very useful, I have some gold washi tape I’ll use

charging only happens if the plug is inserted a specific way round, and if you insert it the other way round (as you should be able to do), the phone doesn’t charge

Some ‘cheaper’ cables are built that way, there are references to that on the forum here. Though it does beggar the reason as to why.

Could it be you have two such cables?

Yeah I do have two of the same cables I did consider that it was the cable though it works fine with my other usb-c devices though i guess phone charging is complicated.

They’re Anker Powerline+ USB-C to USB 3.0 (from what I can see they aren’t certified so that be it?). I also had trouble charging with a friends charger though I don’t remember what it was. I haven’t had issues with this brand before so all my chargers are the same so I don’t have anything else that’s working to test with. Might just take it to the shop anyway since presumably they’ll test it there anyway (with the correct cables)

Yeah I do have two of the same cables I did consider that it was the cable though it works fine with my other usb-c devices though i guess phone charging is complicated.

I have a cable that works without issues when plugged to a wall charger, however I noted when I use the cable with my Anker powerbank it charges the FP3 only “one sided”. When I use it with the “wrong” side plugged in the USB port the LED blinks and FP does not charge.

Ok after going to the shop it seems my cables are the issue.

At first it looked like theirs weren’t working properly either but they said that it because the phone was only supposed to charge on one side (???) I had to convince them that one sided charging wasn’t a feature of the phone and they went off got another plug and wire which supposedly did work. So now I’ll make sure to buy an IF certified cable to replace my others (fairphone don’t deliver to where I live so an official one isn’t an option)

thanks everyone for your help

Thanks for the update. I’m happy that you could sort out the problem. These USB-C related issues seem to be something we’ll still be dealing with for some time, unfortunately.

Please mark your post as solution so that others have an easier time finding the relevant information.

Update I bought this ( https://www.amazon.co.uk/gp/product/B07CWFNZZF/ref=ppx_yo_dt_b_asin_title_o01_s00?ie=UTF8&th=1 ) it’s supposed to be IF certified and it still only charges one side, is it possible it’s the plug (the kind you plug into the wall instead of the wall ones) it’s connected to? I have other plugs and none of them work either

does anyone know any cheap-ish brands that work?

The FP3 is only USB 2 compatible. The USB C plug/socket is QC3 dependent for a quick charge, but the wiring can be, as designed, compatible with either oreintation.

It still could be that the cable is not reversable, you can try with onther device, or the bottom module in the phone may be corrupt, with debris or tarnished.

Try and mark which side of any cables you use to note which way up and then try in other devices etc.

Oh all of my other cables work with both sides with other devices (such as my headphones and Nintendo switch) and this one was marketed as working with both sides as well. I don’t really understand why it doesn’t seem to want to work properly at home as for whatever reason the phone did charge both sides in the shop (though the first charger they tried didn’t work either)

I´ve faced such issues with a broad range of cheap-ish different cables/chargers. However I also faced this with rather premium cables/chargers - but by far not that often.

The USB-specifications hide a huge complexity of definitions and norms behind an “easy to use”-solution for “usual endusers”. The fact that many manufacturers of USB cables/chargers (often especially the cheap-stuff-producers) do not strictly follow these definitions unfortunatly thawrt this easy-to-use approach

So about your question:

does anyone know any cheap-ish brands that work?

I have good experiences so far with a (german) supplier shop for rasperry pi equipment. The prices they got are pretty interesting.
In case you´re not able to speak german - don´t worry. You can switch language on that page to english etc.

Maybe take a look here: https://www.berrybase.de
Unfortunately I don´t know their conditions about shipping their stuff outside of Germany but

For your request I tested the cable I bought in this shop just right now with my FP3 and I can say it works on a standard charger adapter. No matter which side I use.
Only downside that I saw was: It was on both sides only with the slow charging speed (but this could also be a reason of the attached charger)

This is the cable which I used for the test: 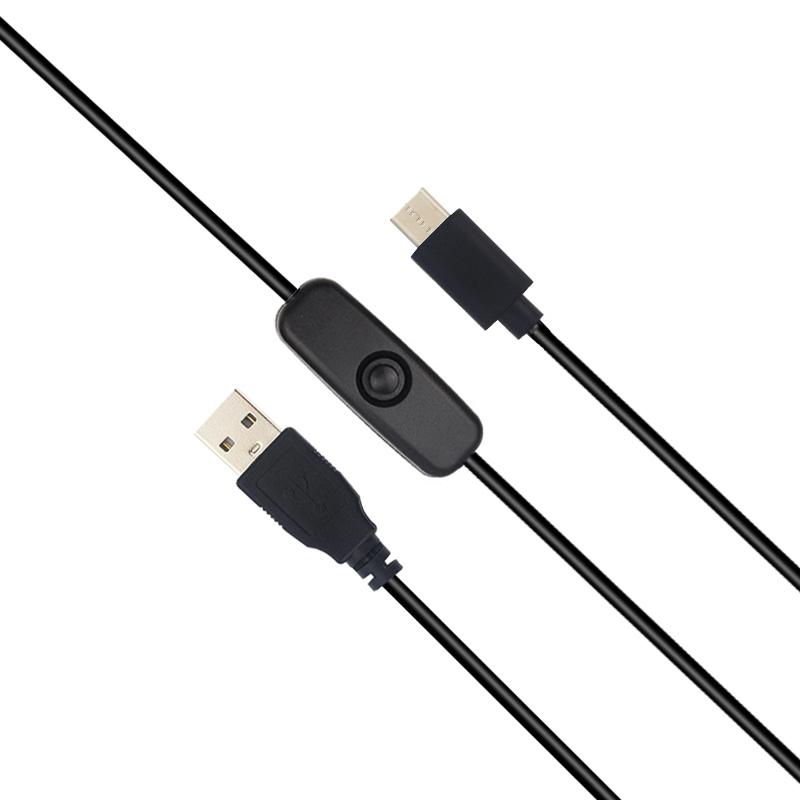 (It also has a switch within the cable … the main reason I bought this one was to be able to switch off my raspi while using it. May be less interesting for your use case of just loading your FP … however: it´s cheap-ish and works with both sides

Thanks so much for your suggestion, I’ve checked the site and it’s definitely a cheap charger, though on the shipping I don’t think they’d send here. I think I might ask the phone shop what they use and see if they’ll let me test it before buying that way I can avoid struggling with shipping/or that my phone is slightly broken and it only charged in the shop by change.

(such as my headphones and Nintendo switch)

I imagine the headphones are not being charged just passing data, or do you mean it’s fine charging the phones in it’s ‘box’.

There are two issue to consider,

So although some devices may be cross wired internally and hence any cheap cable will power, if the device isn’t cross wired then you will need a cross wired USBC or orientate it to fit.

Ah I kind of assumed there was a good chance of some kind of electrical magic going on. Thanks for the explanation it’s very clear and I understand now, hopefully the ones in store are cross wired otherwise I think I’ll just have to make do with a marked wire and being careful

Sounds like a fine idea, especially if you already have spare cables.

Oh that little table doesn’t take into account the charger. If the charger is USB A then it will always be single ‘wired’ and there’s no guarantee that all USB C chargers conform as the USB C is just the design of the plug/socket and has no relationship to the way it is wired.

I have a cable that works without issues when plugged to a wall charger, however I noted when I use the cable with my Anker powerbank it charges the FP3 only “one sided”. When I use it with the “wrong” side plugged in the USB port the LED blinks and FP does not charge.

Update: I got a charger in shop today and it works !!! Third times a charm

Who would’ve guessed finding the correct cable would be so finicky. It’s a Belkin boost charge, and I’ll just use the spare chargers around the house

Update: the charger stopped working at some point between me buying it and yesterday so I contacted the phone shop and they just replaced the entire phone as they’re going to send it to Amsterdam for repair, and they don’t sell the spare parts in store and now the new one seems to be charging normally.