Please give 24 hours before expecting your notification track and trace email.

Did anyone receive a notification for tracking or delivery information for a transparent-blue FP already?

Hello,
Did anybody with a blue translucent cover get his tracking code, already?
I thought they were sent yesterday, but I didn’t get my tracking code, yet. And I have delivery number 893.

Nope. I received an SMS from DHL, but no email whatsoever…

I placed my order also on the 16th of July. The day the payment is recieved by Fairphone you are assigned a deliverynumber. As my deliverynumber is 140, yours can’t be in the 3000. Or it should have taken months for your payment to arrive.
My ordernumber is 100002916, which gives me the idea that you are looking at your ordernumber instead of your deliverynumber.
Anyway, I have 140 with a blue translucent cover. Up to now I am still waiting for my phone and still no sign it’s on it’s way.

@anon90052001 Can you tell us more how the delayed phones are dealed with.
Is it now shipping only delayed phones till everything is normal and shipping can begin by the deliverynumbers?
I feel that would be only fair to the customers with a blue translucent of blue matte cover that didn’t recieve their phone because of the delay in their covers.

Our counter is still not updated and stands still at 4000.

The journey of my FP2 ended. It visited Eindhoven, Brussels, Frankfurt, Nuremberg and Dresden. 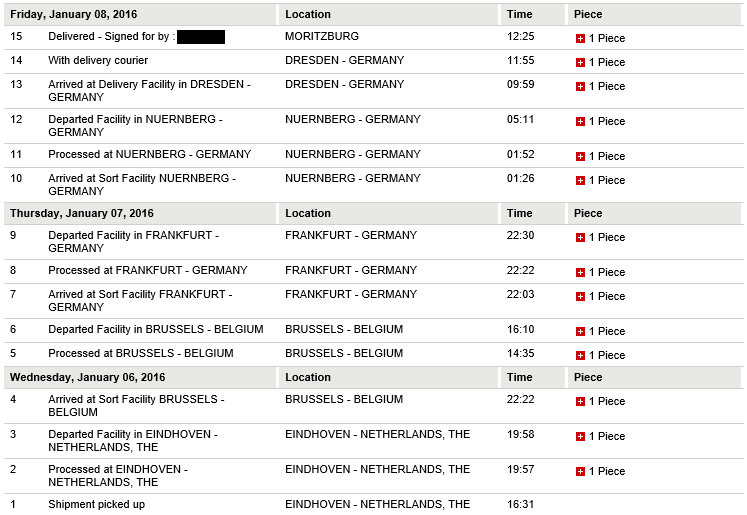 We still need to update the counter from yesterday’s shipment (FYI @TobiasF related to your post).

Yes, @Lidwien, I’m gathering more information about the order of how phones are shipped out of the distribution center.

@Joe Can you tell us more how the delayed phones are dealed with.Is it now shipping only delayed phones till everything is normal and shipping can begin by the deliverynumbers?I feel that would be only fair to the customers with a blue translucent of blue matte cover that didn’t recieve their phone because of the delay in their covers.

If you’re in The Netherlands and also have a ‘PostNL’ track&trace account, you could have a look in there… This is what showed up for me this morning!

My order number is #327 and I have chosen the blue translucent back cover. So it looks like FairPhone indeed is fullfilling the oldest orders first!

Yes I have an ‘PostNL’ track&trace account. But I see no parcel of Fairphone.

At least one good thing, I have to be in Belgium this afternoon, so I am luckly they don’t try to deliver it then.

Seems like the issue with the email notification hasn’t been fixed entirely.

Order #485 (30 minutes after the opening of pre-orders), and still no news of delivery

A journalist in my city received his Fairphone (same color) several days ago… Problems with ranks?

Thanks for the feedback, also from @Otto_Noll. This is worrisome that you did not receive a notification email and I’ll forward to the ops team to investigate.

But yay, phones with blue translucent back covers are now in the hands of some owners!

phones with blue translucent back covers are now in the hands of some owners!

They came at my door at 16:53 hours, but I was still in Belgium. No e-mailnotification.
Thanks to @anon90052001 I now have my Track and tracenumber and DHL is coming again on monday.
Luckely I have nothing on my agenda on monday

Not exactly sure. I also placed my order on the 16th of July but paid by bank transfer. However, I only got the bank information the next day, and by then it was too late for my transfer to arrive before the weekend: Therefore, I had delivery number 277x…

Yes I have an ‘PostNL’ track&trace account. But I see no parcel of Fairphone.

Which makes sense now, knowing Fairphone has used DHL to send you your Fairphone.

It’s interesting that they’re using PostNL to send my phone, perhaps because DHL doesn’t deliver in The Netherlands on Saturday? Anyway, I’m happy to see PostNL now confirms that they’ve received the package from Fairphone. And it’s good that you’ll receive yours soon as well! 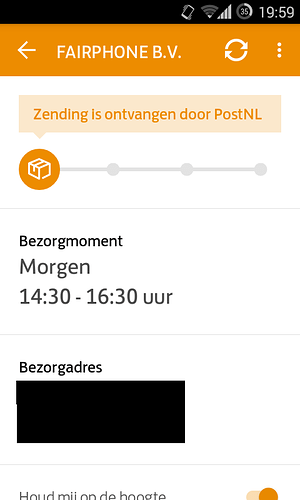 This is worrisome that you did not receive a notification email and I’ll forward to the ops team to investigate.

For what it’s worth: although PostNL now has confirmed that they’ve received the package and will deliver the phone tomorrow, I have not received any email from you about the upcoming delivery (I’ve also checked the spam folder to be fully sure). In the shop my order (100002951) still shows ‘Prepare batch’. I don’t mind anymore myself of course, but hopefully you can fix this for your future deliveries to other Fairphoners!

I just received an e-mail from Fairphone. It has my track&trace number.
Unfortunately the number is wrong, it misses the first digit, which in my cases is an “J”.
My track&trace number should start with “JJD”.
Perhaps this information can help somebody else.

Thank you for your order!
This is your delivery number: 3378
Your payment has been successfully completed. Below you’ll find your receipt, which is also attached as a PDF.