I never figured out the reason. My wild assumptions are either temperature or humidity. The probability of the phone going into crazy-mode increased with duration of constant use. Maybe there is static charge building up.
The pointer-position-feature does not solve the problem, I just enabled it to visualize the problem.
I got my phone replaced today, so the next days will show if this solved the problem (I have to setup the new phone first).

The pointer-position-feature does not solve the problem, I just enabled it to visualize the problem.

Yes, I just glanced over this thread some time ago and had this feature in mind when I faced the problem last week. Thats why I gave it a try. For me it makes no sense, that it has something to do with the dissappear of the problem at my phone.
Nevertheless I dont dare to deactivate it, because its so nice to use at the moment and the jumps were gone in the moment I activated the feature.

It would be nice to get some information of the fp technicians what they think where the problem comes from. (software,
hardware, grounding problem,…)

Just a question to all having this issue, which device did you use for charging? I have seen similar behavior related to a charger with 2.5 A output. Maybe too much?!

I have the same issues, no matter what situation I enqounter these reboots, crazy touch inputs etc. I have tested numerous chargers and in my case Samsung chargers with thick cable seems to solve the famous “charger problems”. I do however have some crazy inputs anyway, often after a reboot has occured.

In my case the only time I see trouble is when screen is on. If its off I can have heavy apps in the background, navigation and such. But as soon the screen is on no matter what I do with it its a ticking bomb that sooner or later reboots.

Have sent a support ticket a couple of weeks ago but no answer yet.

Hey there, this support article might be useful for some of you with this touchscreen issue on your Fairphone 2.

I have this issue on my phone, and it has now become completely unusable. it makes it’s own calls, turns on the torch, opens apps, and generally flickers about all over the screen. I love the concept, but my phone is at chuck-it-out-of-the-window point. What’s really upsetting is that i’ve emailed the support team numerous times and haven’t had so much as an acknowledgement. sad-face

The advice that support would give you is basically what’s in this support page.
In terms of contacting support - if you e-mail them they will first convert the e-mail into a support ticket, at which time you should get an automated response with your ticket number. If you’re unlucky either your e-mail got stuck in their spam filter, or, more commonly, their response got stuck in your spam filter. The safest way to open a ticket is via the support form, but always check to see whether you receive the automated response after submitting the form (as if you don’t receive one, the actual replies will also likely be lost).

Thank you Johannes, I have had a response now. You’re right, though, they did just suggest updating software and putting my ‘Touch and hold delay’ onto ‘short’. Unfortunately, my phone is already updated and on ‘short’, so these don’t help. Hopefully there are some more ideas. Meanwhile, the ‘Kids Paint’ thing gives me very odd patterns - i paint vertically up and down the screen but get mostly lots of little near-horizontal lines all 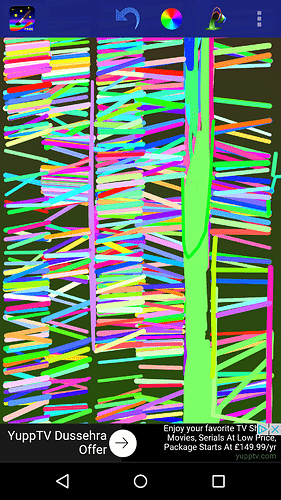 You are not alone. I have the exact same behavior. I managed via Supportticket to recieve a new phone. Fingers cross the display is fine with this one.

My phone is now constantly sensing input rapidly up and down across the screen, it’s unusable. I’ve raised a support request and hope it gets sorted asap, I’m also scared I’ll lose my Google Authenticator data which would really give me a bad time.

I have tried it with one bead at the cable: Didn’t make any difference!