I have been thinking about what the idea of the fairphone 3 would be like. But then in the end, my conclusion was, it should be the core update.

I’m sure all have had that idea, but is it that far off?

I mean, you could take all your current modules off.

So then you would only have changed maybe 30 procent of the product.

There could be many desires for the fairphone 3: smaller, USB C, etc…

But the core upgrade makes so much sens in the Fairphone vision? Don’t you think?

The new core could easy accomedate the old hardware modules?

However, the idea has been brought up and briefly discussed before and from the vague skepticism I heard back then, it sounded to me like the software challenges (drivers etc.) that this would create would be impossible to overcome. But don’t get me wrong, this is still my most-wished dream for a future Fairphone, too!

From an ecological perspective it is also not an ideal solution. According to the Life Cycle Assessment done by Fairphone, the core module accounts for 60% of the environmental impact of the Fairphone. Therefore you should use this part the longest an ideally not replace it.

Therefore you should use this part the longest an ideally not replace it.

Yep, I fully agree! Besides I haven’t seen many phones that have broken down because of a defective chipset. Most phones break because of defective peripherals (camera/microphone/speaker/USB-connector/headphones-socket).

But on the other hand: would a core module update not be the most ‘fair’ way to produce the FP3 (and at the same time allowing FP2 owners to update theirs if required)?

I agree, but at some point the Core will eventually be replaced for many reasons. The core should always be made to last the longest in that regard.

But would also eliminate the numbering Fairphone 1,2,3, etc.

Since the phone is in a constant evolution of modules, “this is of cause in theory”. Where there is only modules and no “phone”, and you always will only change the part that is needed.

We have already seen this evolution with the Camera, where the old one goes out of life, and the only camera that exist now, is the new one.!

Yeah, and we have seen with the camera as well, lots of users buying a new one just because it was better, like we see right now with the transparent/translucent covers.
New modules almost always induce the desire to “want to have”.
Obviously I can not speak for everyone on this behalf, but I am absolutely certain, that I am not the only one.

I have no solution, as modularity obviously is a great way to reduce environmental impact.

If the new camera module was not there, some would have, at some point, got out to buy a new phone with a better cam(Or what ever feature you need).

But here you can get that new needed feature for 5-6% impact, compared to buying a new phone!

If I make case, just out of pure speculation:

If I extend the view over a longer time frame, 10 or maybe 16 years. The impact of me buying some new modules every 2-3 years, compared to buying a new Smart-phone every (normal change, lets make it really large = 4 years ). I would argue that smaller incremental module upgrades wins by a long shot over time.

So that would already mean half impact.! And I have even been Large with how long people keep there phones.

Basically I do agree of course.
The calculation just gets complicated, when you try to include in it those modules that are bought, because they are “just a module”, while a new phone would not even be considered for months (years) to come.
It would take some research, to know the amount to which buying a module is in avoidance of buying a phone and to which it is additional consumerism. The age of the phone could be an indicator. I guess a simple questionaire could present a first rough estimate, that should be completed by market data/research.
Any scientist/researcher interested.
Well, I just think, it takes some balancing; and developing one new module after the other might turn out to be ineffective, ecologically speaking.

I agree with your point. If the Google project Ara(modular phone) , had been successfully coming to the consumer world, it could have sparked an explosion of unlimited modules, turning into an even bigger environmental problem then it is today.

The picture of the consumer behavior, needs a heavy repainting.

Actually I don’t think, a core module would be seen as “just a module” by most peolpe, as it most propably would be quite expansive(I think a few years ago the come module was sold for 340€).
I personally would not replace it if not really needed yust because of the price.

Of course you shouldn’t replace it when not needed.
But ‘when not needed’ may also be very personal. let’s say that FP develops a modern core module (say Snapdragon845/4GB/128GB) and develops Oreo/AndroidOne for it. Now that module may follow the same route as the new camera module: new FP’s will have it embedded, for sale as spare part (also for existing phones) and FP would also keep support for the current module alive.
Wouldn’t that make everybody happy? A ‘new’ FP model with (relatively) low development cost, an up-to-date FP in the shops and current FP2 owners have the option to continue the use of their current phone or to upgrade to a state-of-the-art phone (at relatively low cost, compared to buying a complete new phone)!

I think that would be the case. If the core was around 2-300€, most but not all would not upgrade, unless you would have the “need” for it.

Could we please all read up on some things that we have already settled on in this forum? The peripheries are deeply connected and adapted to the core module (closed source drivers!). Make a new core module -> make new drivers or make new peripherals.

If it was that easy I’m sure Fairphone would do it already.

I think Fairphone is not all about modularity. A strong point of Fairphone is the transparent and fair production chain. Consider this, the (rather big) company i am working for has rejected Fairphone as an employees phone, because it is not “up to mark”. I think following question should be asked: Does Fairphone want to stay niche or want to go big? Big by means shakes the current market and sets a better example with a transparent and fair production chain, using recycled material where possible?

For the modular people - (i’ve got no idea about software) - why not use Fairphone as a playground? Offer funky modules that go with the “core”, offer steps of cheap to highend options for each module (camera, loudspeaker, etc). Is that technically possible? If so, maybe that’s a way forward to offer something new that get’s the attention of the iphone spoiled community. And i am not saying iphone is the only competitor. The other part of the market are people who want to have freedom, full admin / user rights, open source on their phone, no lock downs by google.

History shows to change the world you need to have the a big community following you. Apple first got big and now slowly starts to be green. Why not become big first with what you’ve got so far and then use your massive resources to become better?

I appreciate your thinking and previous discussions, which i cannot always follow technically.

7 posts were split to a new topic: Is discourse complicated?

Yep, I have to agree.

Relating to a core upgrade I thought about looking out for a pin compatible snapdragon 801 successor. This would give FP the option to only change the layout as little as necessary for few modifications to e.g. more ram. But according to Wiki and Snapdragons HP/Datasheets we have the latest version number and the letter revisions (AA/AB/AC) don’t differ too much.

More central for FP having obstacles to move on without re-engineering the entire SoC board is the fact that the next successor 805 has its modem not integrated. 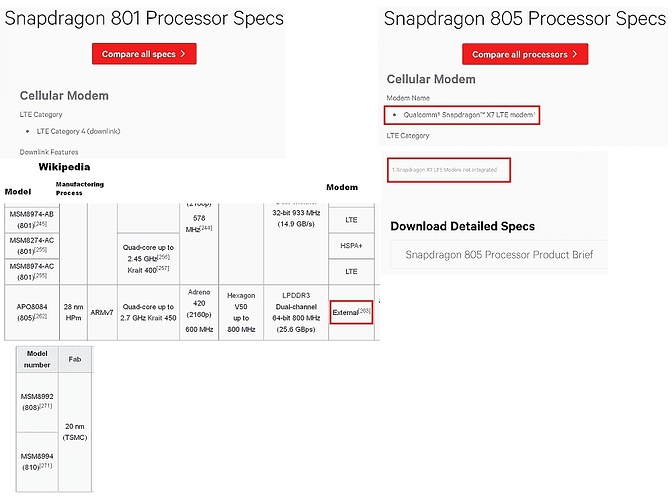 Snapdragon 808 and up are manufactured in a different process (<28nm) which most sure will change the pin layout again.
So there are limited chances to upgrade to a newer SoC here on a low cost basis.

I think make more out of what we have is a good way to go. But of course utilizing all featured options would also require a massive redesign of the core module.

Why not become big first with what you’ve got so far and then use your massive resources to become better?

I believe FP is not out for going this path as others do. It wants to startup in a positive light, which is the harder way but up to now…there is a functional product to be sold, many awards won and more positive than negative overall feedback. Also if it comes to user freedom.
But here are also (former) apple users who got themselve a FP2. Who knows, maybe despite of all this shiny glare and glamour they were fed up with their company policies after all.

History shows to change the world you need to have the a big community following you.

In which direction? To the positive or negative - everyone has its own thoughts when reading names of big players like Apple, Samsung, Monsanto, Nestlè, Coca Cola, VW, Facebook, Amazon, (Elon Musk)…
Actually the movement makes the difference.

Can you upgrade the ram/processor? Road Map

I have only seen the option to upgrade the camera, but can you upgrade other stuff too?