So I re confirm (just tried it) that the FP2 shall be in Fastboot mode and the right command is “sudo fastboot devices” with the “s” at the end of “devices”, this way fastboot gives the FP2 reference.
(“Fastboot device” (or devices) command only gives a message and get stuck.)

So I’ve launched the installation from Ubuntu 16.04 with no root privilege.

Just a remark concerning installing FP Open OS: you will need the installation by fastboot if you have a newer FP2, as apparently the build of the directly downloadable OTA package is older and cannot be installed over a newer build (Method 1). While with fastboot (Method 2) all went fine.

This should be changed in the installation guide on code.fairphone.com. Who is responsible for that page? @Douwe?

yesterday I tried to go back to normal without encryption but I got a bootloop. So I tried to flash a clean Fairphone Open-Image via Minimal ADB and Fastboot on Windows.

Somehow I got confused by the crossed lines above. My Fairphone is detected via fastboot but I could’t figure out which command to use for flashing and if there is any need to unzip the image. The official instruction didn’t help out, I don’t know where to but the (./flash.sh).

I would be very happy about any straight advices without too much of programming knowledge!

I hope my answer will help ! Just in case : the Stackoverflow forum is a very good source, as it is a geeks and coders forum

thank you so much for your great instruction. Fastboot did what it was meant to do. So thank you very much!

But there still is an issue: I got the feedback that flashing was successfull (see screenshots), but when rebooting it still asked for my decryption PIN and the boot loop was still there, too. Does anyone know why? Is there any recommended instruction how to get away from encryption when the GUI is not available anymore?

Again, I would be very grateful for any ideas how to deal with this…! 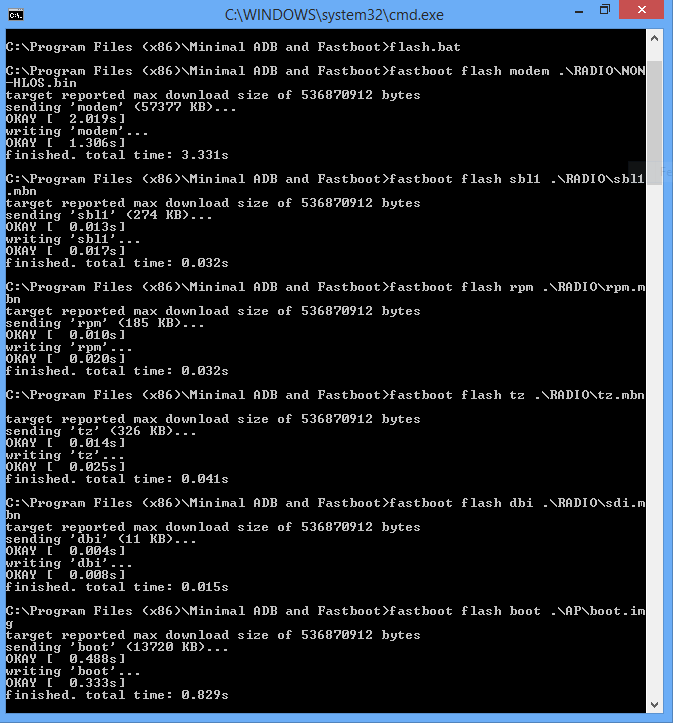 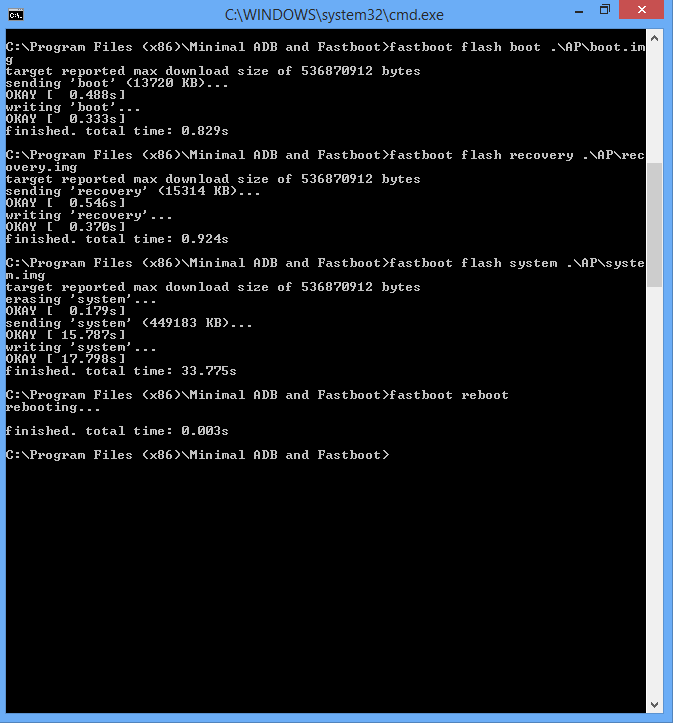 Looks like the clean install isn’t touching the userdata partition. If you want to remove encryption, you’ll need to wipe/format it.
As for the boot loop: If you previously had openGAPPs installed, starting the phone will still get you in a boot loop because a rebuild of the user-installed apps is performed at boot and for some apps this means that openGAPPs is required. If it isn’t there, the rebuild fails, the phone is restarted and a new attempt (that of course will also fail) is started. As openGAPPs is installed to the system partition (which isn’t ever encrypted), you can fix the boot loop in two ways:

I just wiped and reinstalled my FP for the second time using Windows10. The installation guide at the top didn’t work for me. Here’s what I did:

@friek I just changed the instructions for Mac (which I use) maybe you can add your comments also to the wiki?

Thanks for the installation guide!
For me, it didn’t quite work as smoothly: I am good now, but needed to run the flash.sh script with root rights (sudo ./flash.sh) as fastboot wouldn’t recognize the device if run with user rights.

Maybe it should work with user rights and my installation of fastboot is misconfigured, I don’t know.
Anyway, it might be worth adding a note to the first post here (and to the official installation guide on code.fairphone.com) about it to save other users the hassle of unsuccessfully re-trying several times like I did.

Well, in fact, I had to make the script executable first (chmod +x flash.sh).
(Since the first line of the script, which is “#!/bin/sh”, tells the shell to execute it using sh then, ./flash.sh is actually equivalent to running “sh flash.sh”.)

done. Thanks for the tip.

Arrrgh - I can’t get this to work!!
I’m trying fastboot using a mac (because normal booting with OTA didn’t work) and a new FP2.

I get this message after following all steps above:
“Checksums do not match. Not flashing.”

uncheck the box to check the signature before flashing

I guess that would somewhen replace the 17.04.0 version currently present in the Installation Guide, so it’s not there yet. How about booting into TWRP without flashing it and then using the OTA file?

Looks like a good alternative.
I think I will wait maybe 2 weeks or so and if until then there ist no fastboot file I will go that way.
Thanks!

Hi,
I’m using Ubuntu and used the following tutorial to have adb and fastboot up and running in my Ubuntu box. Maybe you want to link it in the wiki or post it as further related info:
LINK

@rootboi: If you wish to update your guide, the version of FP OOS has changed (and with it the link) and also the flash files are now called flash-for-mac.command, flash-for-unix.sh and flash-for-windows.bat. Thanks for writing it!