But the second response to this part of my request I got an order confirmation after 9 minutes with my selected new case.

For my second problem (the legendary reboot problem

) I also get a standardized text block. In this case I must deliver some additional information. I don’t write more for this part because it is the wrong thread.

In summary my first thought after the reply was that I’m a little bit sad about the missing apology for the late response. Especially because of the knowledge they use standardized text blocks.

They could make an additional text block that contains an apology. (Yes, I am serious!)

How do they handle the service cases? Last in, first out? Other people like me are waiting for ages

Hey, I discussed with the support team and they told me that he fastest way to get a response is to open a ticket with the IMEI number and order number in the title. Also a proof of purchase if not ordered in our shop. As soon a ticket is generated, give us call and mention the ticket number. That’s the fastest for agent and customer. And to take away some speculation about how the CS team works. There are several subdivisions in the support team. We've got people who pick up the phones,…

I guess it depends on the reason giving for a support request.
Broken cases are usually handled on the spot (as far as I can judge by own experience and from this forum). That’s evident, as it’s a simple case of “send picture as proof for broken cover and we will send you a new one”. No analyzing lots of possible reasons for failure etc.

So I would assume, that it’s not last come first serve but “easy done, first done”, especially when solving those cases takes less than five minutes in all (1 sending standardized message; 2 checking IMEI, order-no and picture; 3 triggering delivery of new cover).

Special notice:
Holidays period is starting soon and there will be two long weekends:

I created a ticket on december 8, Average response time is 16 days, I’m at more than double that time now and absolute no response appart from the automatic reply. Also no answer on a reminder from me.
Why is it taking sooo long?

I opened a ticket on x-mas eve; i.e. December 24th.
Color-pixeled display after dropping my phone.
As that was no warranty case anyway, I ordered a new display this year.
Everything fine since then.
Wanted to close my ticket right away, but somehow forgot about it (just posted it here).
Yesterday, February 12th, I received the response; exactly 50 days or a good 7 weeks later.

Everyone not going to pick up the phone for speeding things up, try some meditation and be patient.
If you don’t want to wait that long, check this advice: #contactsupport

Edit/Ps:
Of course I replied immediately to let them know, that the file can be closed.
Received another message today: done! One case less, they have to worry about.
And as I come to think of it, it’s one case, that obviously ups the average response time, although I could and should have canceled it long ago. Sorry about that.

It has been a while since I updated this, but here are the numbers from last week.

And the new numbers of this week are

The Support team has been working hard to get the waiting time down. You can see here how this affected first reply time in the last weeks: 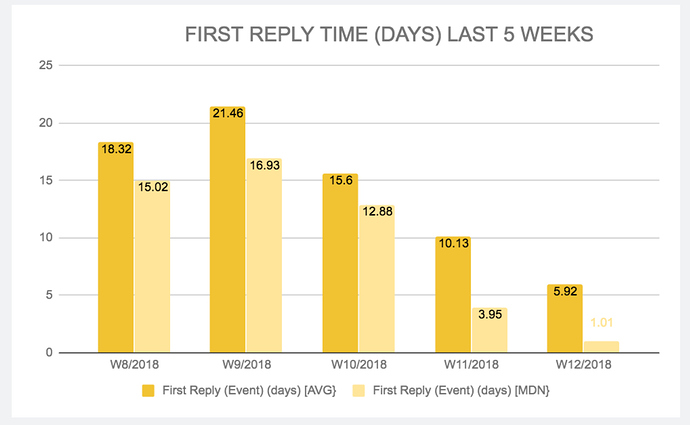 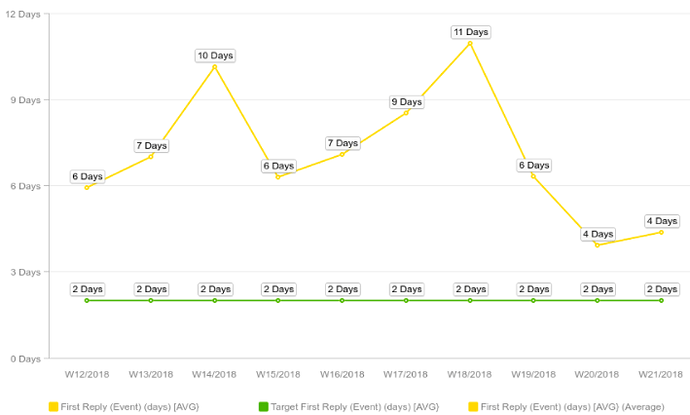 Time for another update on the Customer Support side:

Do you, by chance, know, how many people work in the support team, compared to earlier?

Hi Stefan, our ‘in-house’ team has 14 members (3 joined in October). We also collaborate with an external party (Xtrasource) that focuses on the support calls, but I can’t give you the exact number on their side.

Adding a quick comment to thank you for the transparency and graph. Likes are nice, but hopefully a few extra comments are even more likely to encourage future stats like this. Love it! 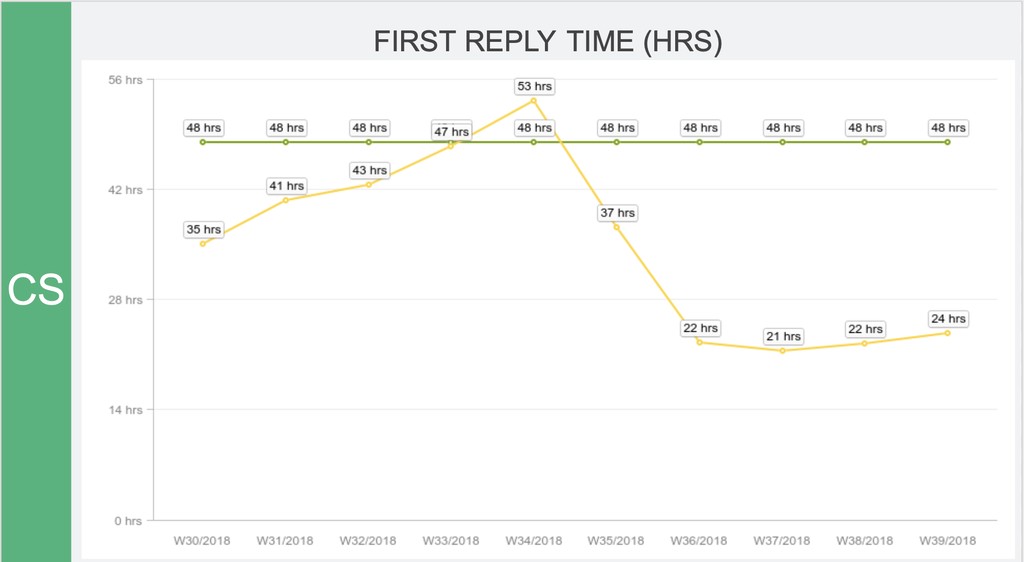 Hi all, quick update on the Customer Support reply time

This is the status for the month of September, as you can see the team has been managing to keep the reply rate around 24h.

No changes in the team number, if you were wondering. Any questions, please let me know!

Has the total amount of new/open tickets decreased as well?