I have found what I have waited for: A Limiter for charging Smartphones. 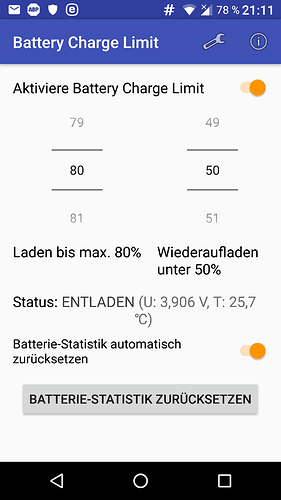 I’ve already used it for more than a week now and I’m pretty happy with this app.

If only such behaviour would be possible on non-ThinkPad laptops…

I’m using it since it came out in September and am also very happy with it. I set it to 80/75 and before I go out for a longer time knowing I’ll need lots of battery I disable it and charge to 100%.

Besides the need for a rooted phone, in my opinion setting such a small window as 50/80 and even 75/80 (if i got that right) raises one question for me:
Do you connect your phone to the charger just once a day over night or do you keep it connected whenever possible, even working on the connected phone?
If the latter would apply, it might stress the bottom module or especially the USB connector and thereby the primary microphone. Like one should hold the wall socket when removing a plug to avoid the socket coming loose, this is even more the case for a USB connector soldered to a circuit board and not being screwed to the casing.

I have it set to 85/80 to prolong battery life expactancy. I charge the battery once a day and don’t use it off the mains at all. The stress upon the USB plug should be negligible since micro USB type B is specified for far more plugging cycles than USB type A.

The stress upon the USB plug should be negligible since micro USB type B is specified for far more plugging cycles than USB type A.

You are right of course, especially when you don’t use the phone being plugged in. The weak spot of course is the soldering to the circuit board, that might get stressed using the plugged phone and that is not part of the stability specification for more plugging circles (as far as I understand it; but I very well might stand corrected here).

Do you know any similar APP that doesnt need root? I use lineage ans dont necessarily want to root it…

I have also very good experinces for about a month with the Charg Limiter App, I also stated this at my post about updating to lineageOS frm FPOS here UpdateProcess from FPOS/Android5 --> LineageOS14/Android7

I remember back, that FP support told me once, that this would not even possible to implement…but times changes? Good for us!