Change Charging Power depending on Situation

Hey there, I’m seriously considering buying a Fairphone once my old phone made it through its 7 years. Now from what I gathered there is no option to charge really really slow. This would have several benefits, as one could time exactly the point at which the phone has the targeted percentage, to save battery life by not going the 100% and not heating the battery as much as with a quicker charge.

The app “AccuBattery Pro” shows the wear of the battery during charging. In the screenshots you can see the different levels of wear.
My charger is the “Fairphone USB charger (EU)” and the “Fairphone 3 USB cable 2.0 charging cable”.

In the app you can set an alarm when the desired percentage is reached.

The phone and the charger communicate with each other as soon as the charger is connected. At first, “Slow charging” is displayed and after a few seconds it jumps to “Fast charging”. So far, I have not noticed any unusual heating of the phone. 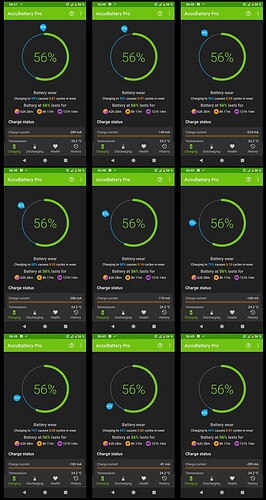 Hi @Thomi and welcome to the forum.

@UweER 's idea is fine if you don’t mind another app on the phone etc.
but my charging has changed since I bought the phone, using the same accessories. For the first four months it was very slow some 5 hours, now it is about 3 hours but I’ve never noticed any warmth and I try to limit the charge to 90% by checking on it. Actually the led comes on at 90% so it’s not so difficult if you keep the phone visible,

Exactly, the charging time that @amoun mentions is also important.
From 20%, I charge the phone again when I have the opportunity to do so. I charge the phone up to 80% when I perceive the signal for it, as I am not always in the immediate neighborhood of the phone. This charging cycle takes about 60 minutes.

@UweER Thank you for your kind reply, this is exactly the app I’m using right now and which led me to suggest something like this here, as it is missing some features I would like in the Stock ROM of a future Fairphone.

@amoun I want it like 500mAh slow or even slower, this is what I use now because the charging port on my Axon 7 is somewhat broken, however I see it as a feature because now I can almost fill the entire nighttime with loading my phone more sustainably.

If the charger could provide even slower rates (as well as faster ones) the battery would barely heat up, and one could automatically set different battery goals at a given time, for example having loaded 75% at 6 in the morning and then cutting the energy.

So I want it even slower depending on the use case, I want it built in and I want it to be able to automatically alter mAh Levels depending on when I need what percentages, maybe one could link it to the alarms.

If you are rooted, you may want to have a look at the Acc Magisk module and its app AccA (on F-Droid), it can limit the charging current.

Wonderful app, I will look into it, thank you! I still hope that some day Fairphone will have the capacity to build something like this into every phone!

Wonderful app, I will look into it, thank you

I agree, I use it every day now for limiting charging, limiting current, auto-shutdown, etc… There are plenty of features. Unfortunately it requires root.

I still hope that some day Fairphone will have the capacity to build something like this into every phone!

I would love that, but I’d rather bet on Google implementing it in stock Android rather than Fairphone.

Not on my FP3+ since purchase in Oct 2021, it charges at the same rate, as I don’t have Qualcomm QC3 communications between the phone and charger as i use a standard 5V 2.4 car charger.