Calculator: how to clear?

Maybe I’m overlooking something overly obvious, but for the life of me, I cannot find the “C” on the calculator to clear the screen… Anyone?

You can click DEL to erase single numbers and you can tap = and then 0 to erase all, but you are right, there is no C. 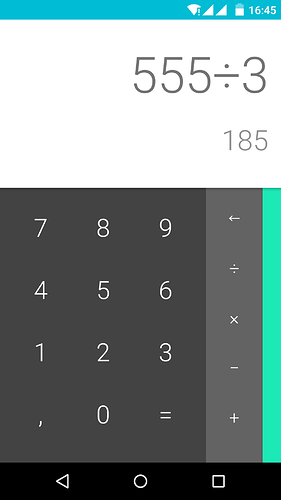 Ok, that may be language specific, I use German. Your “<-” matches my “DEL”. And I suppose that when you enter “=” in the situation above, the sign changes to something that matches my “CLR”.

Yep, now I get it. I’m not a great fan of this type of ‘hidden features’, but at least now I know how to operate it.
Thanks for helping out!

This topic was automatically closed after 3 days. New replies are no longer allowed.