Battery troubles since update to 1.5.1

just updated my phone to 1.5.1 a few days ago and ever since I’m having trouble with the battery. It drains within just a few hours, e.g. unplugged it around 7:30 this morning, it’s down to 11 % now, at 9. Barely used it: alarm, some messages. Restarted it several times, took out the battery… Whatelse can I do?

I’m also confronted with the re-boot-problem, but that’s been going on from the moment I received it

But the battery draining is new.

What do you see, if you go to Settings/Batterie?

Hold on, I took a screenshot, but can’t uploas it as of now.
Edit: Here it is: 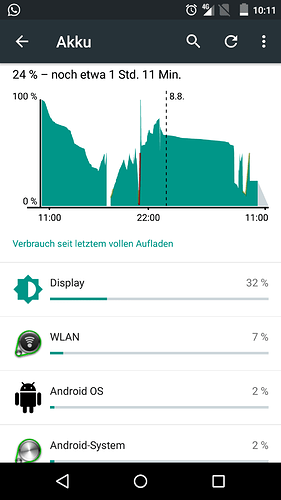 wireless is off. display settings are usually es low as possible, adaptive setting.

I have a similar problem since the update. After less than four hours, the battery is down to 52% - without using the phone at all. Wifi is on since I’ve been at home all day long. And the report says wifi has used the most of the battery.

… and you are waiting for me to write to you: [quote=“Spielmops, post:2, topic:20754, full:true”]
What do you see, if you go to Settings/Batterie?
[/quote]
before sending a screenshot?

It’s nice of you to answer… I see the wifi has used the most. Yesterday evening, the battery was almost empty. The phone rarely used. The wifi had used 40% being at home all day long. Summarizing all the numbers, I could only find 70%, which was even more strange.

Then switch Wifi to off.

Any more advice for me?

Thank you! That option was indeed activiated. Let’s hope for the best!

And when you don’t use the GPS, deactivate it in “settings” and set it first to “device only”, otherwise the wifi will still consume.