Another random observation (and I’m not nearly as techy as other contributors here). My FP2 battery seems to have been draining very fast, and in particular had drained overnight. I read the advice on the forums: (Battery problem at night, which is for FP1 but seemed relevant).

So I decided to try draining it right down. At 3pm today it was on battery saver, saying it had 1% and 4 mns left, but then didn’t move for 30 mns. It’s now 6.55pm and I’ve been listening to Spotify on my phone since then, and it’s still going strong. It sees that battery life may be fine but the battery indicator is faulty and has been giving false alarms.

Can I reset it?

One approach to recalibrate may be to drain it completely and recharge completely afterwards. It might be necessary to repeat this procedure up to three times. Your mileage may vary.

Thanks, StephanK. That’s kinda what I’ve been doing. It’s just finishing draining down for the 3rd time

Update:
I kept Spotify running on my phone yesterday evening to see how long it took until the battery ran right down. Most of that time it was on wifi, but for a short time I was out and it was on 3G. It indicated 1% and 4 mns left for over 9 hours, and finally buzzed that the power was going off at quarter past midnight.

This morning, I’ve updated it and installed an update, and the battery use graph shows that it was at 100% from shortly before 11am to about 12.40 pm, so for about 90 minutes, and then it fell to 1% within about 10 minutes, with 6 secs left. I’ve not been using it during this time, it’s just been on standby, on the wifi. It lasted about 5 minutes, and has now gone into a reboot loop on the black and white screen.

Since then, I managed to recharge up to 100%, and it lasted about 1.5 hours on that charge before running down again.

All very mysterious. Any other thoughts welcome. It’s got a new battery (ordered from Fairphone), that I put in three days ago as I thought that these battery problems might be because it needed a new battery.

I think I may have to read up about how to take it apart and see if some of the connections need cleaning or something.

I updated to the latest 16.10 build of LO and I notice huge improvements on the battery side. The phone lost hardly any charge yesterday and the indicator is predicting 6d (yes, six days) battery capacity. Good Work

a little update from side besides that most people are of the opinion that battery life depends heavily on mobile network signal strength.
I’ve made some contradictorily experience in this regard. 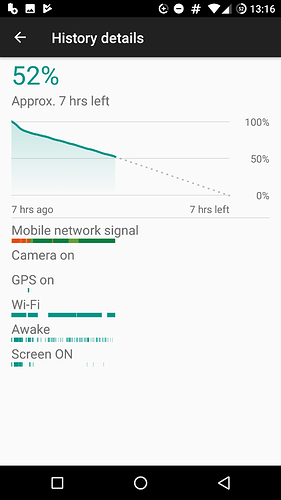 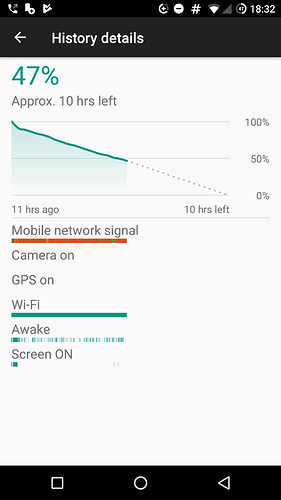 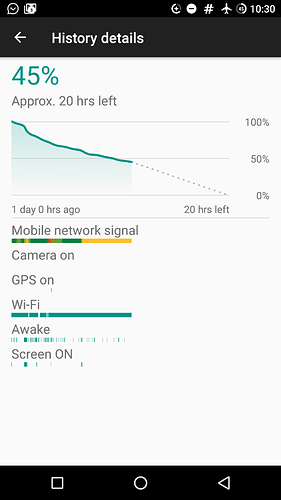 Screenshot_20171022-103040.png1080×1920 99.4 KB
After I had done the last screenshot I used the phone a bit but put it aside a couple of minutes later. That triggered something what caused the battery to drain as shown in the screenshots above but I cannot explain what it is.
Any troubleshooting with BBB and the support of the guys moderating [APP][2.1+][7 jan. - V2.2.2] BetterBatteryStats on XDA didn’t help either.

Unfortunately I don’t have an app what shows me app etc activity history (not as a summery as in BBB), so I could narrow down the trouble maker.
Does anyone know a proper app?

My hope lies know in Xposed and Amplify, what can know be installed on LineageOS run FP2

Well, in the first two pictures, bbs wants to tell you that the phone didn’t sleep for a noticeable time. Whether this matters depends on the specific wake locks or other events it’s reporting.
Also, in my experience, i have a high variance of battery drain while sleeping, ranging from .1℅/h to 2%/h… I couldn’t nail this variance…

Well, in the first two pictures, bbs wants to tell

actually those are screenshots.
Battery drain is a way more than .1℅/h to 2%/h.

I need some tool what shows me activities per point of time not as a summery for a specific period of time. That would be very helpful to narrow down the consumers.

Sure these are screen shots, but you notification bar shows a notification from bbs. Not in the third picture.
The drain i was referring to was the idle drain

I totally agree, best battery life ever on FP2 with 16.10 build.

I can only add more enthusiasm for this build: A long (10h) train journey yesterday hardly drained the battery compared to older LO builds despite all the power consuming factors of a train journey: Lots of mobile transmissions because of the cell changes when the train moves, data use, WiFi, listening to Music, tethering for my tablet etc.

how?? still draining battery, but I almost no apps runs in background.
Trying to limit wakelocks by means of Privacy Guard but don’t see an impact

Well, my usage today resulted in the following observation: while using, at least in some apps, the phone was noticeably warmer. I don’t know whether i should try to investigate or wait for the next weekly, as it is known there’s some wakelock issue (though wakelocks shouldn’t matter while display is on, by definition)

Nobody said that next weekly would fix anything

I didn’t take any extra measures to get there like taming WiFi or installing some battery optimizing App or something, battery life for me was and is just normal.

Well, of course everybody expect the next weekly to fix everything

We’ll see what next Tuesday will bring

(This means, of course you’re right. BTW, in my setup i don’t experience a stray wakelock.)

Since the update today i habe the most amazing battery stats since i have my smartphone 1 1/2 years ago! I’m impressed!

I have no noticeable battery drain with LineageOS (migration from unofficial to official build didn’t make a difference).

Be aware of the performance profiles of the battery saver settings.
When I installed LineageOS i did set the profile to “Efficiency”.

how?? still draining battery, but I almost no apps runs in background.
Trying to limit wakelocks by means of Privacy Guard but don’t see an impact