I did a very long flight, involving multiple connections and the so. For this reason, I had the need to charge my phone using the airplane’s outlet, available below the seat. I noticed that the phone would stop charging about every 30 minutes. I thought it was some sort of security feature of the airplane outlet. When I arrived to one of the layovers, I noticed the battery drained super fast, so I tried to charge it in multiple plugs around the airport, all of which had the same problem. I noticed that however much I tried, the phone wouldn’t charge beyond 25% (actually this threshold was changing every ~8 hours… my trip was really long, btw.)

During all way forward and back in my trip, the phone battery acted up really bad. It would get suddenly hot and drop the charge level very fast, or it wouldn’t let me charge beyond some threshold around 30%. In my place of destination, the problem persisted, then I changed the charger & cable, the problem went away, and then came back, I changed the charger back to the original, the same happened, until it started working well again. On the way home, I had a similarly horribly long trip, where the battery problems came back exactly as in my way out.

After about two weeks here, where I live, the phone stabilized again, as if it had jet-lag. I thought that perhaps some plug messed up with the battery controller. Short ago, though, the battery had some more battery hiccups. I got worried and took some screenshots, of how the battery is behaving: 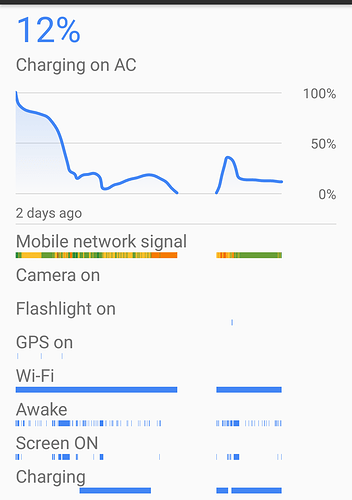 If you put attention to the times I was trying to charge it, it becomes really clear how weird the the charging is happening.

I don’t think that the battery is just dead, because when the phone is not acting up, it has a really good endurance. I think that there is someting off about the lithium battery protection circuit, or perhaps some voltage regulation circuit.

That’s it. Thanks for reading through such a lengthy post!

I noticed a simliar behaviour with my FP2. I have the latest Open version of the OS.

Most of the time, my battery keeps me through 24-40 hours (I’m no power-user). At times, the battery is draining within 2 hours from 80 to 20 percent. If I notice it in time, some restarts might help but it really is totally random.

With Android 6 I have experienced your report (heating up, quickly drain) in certain roaming countries. Disallow synchronisation helped me a lot here. With Android 7 my experience seems better, but due to lack of experience I cannot give final reporting.
Going in certain train abroad I also faced the stop/re-start charging with Android 6 which for me looks as if it became better as well with Android 7.