Hello, after the last update my battery has gone down really quickly and charges very slowly. The phone is also very hot. I remember this happened before after an update and somebody posted a solution by changing the in phone settings/users. I can’t find that thread so if anybody understands the problem or knows how to fix it, I would greatly appreciate it.

Is this what you were looking for? https://forum.fairphone.com/t/wifi-drains-battery-after-marshmallow-upgrade-see-first-post/27783/10

No it was a different one on the fairphone forum. I think it changed usage/user settings.

This is how bad my battery is after the update. It was fine before, I think there is some bug in the battery usage/over powering which needs to be reset. 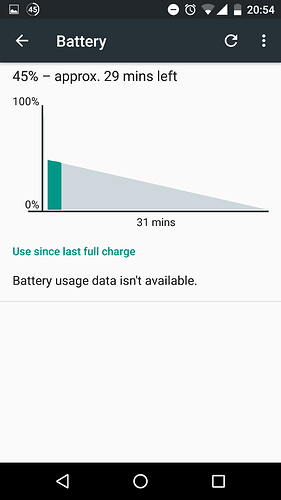 Others users seems to have the same issue. We wrote about it on the topic about Battery problems : FP2 Battery Problems (drains quickly, CPU gets hot) - See batteryguide for workarounds

I didn’t realise there was a fairphone update recently but it looks like that might be the source of the problem as it impact several people.

I have had exactly the same problem for three days. I though my battery was dead, so I bought a new one, unfortunately a brand new battery 100% charged only lasted 2 hours.

I have the same problem. My battery started not to load well. I bought a new one. But also the new one just lasts for a very short time. The fairphone heats up very much.
Now I am trying for months what the problem is, but the only way to stop the heating, is taking it offline. If I want to read more incoming news, I have to plug in on the electricity.
The only solution I seen now is buying another smartphone.

Nothing in the #batteryguide helped?
Phone is out of warranty?