Thats why I now use 1MobileMarket, although the updates function is not working smoothly there either. I only download Apps that are also available on Google Play, wich means they are save (in the sense of not having viruses or stuff like that, not in the sense of not spying on you!)

thanks for your great post above. Great recommendations! Still, If have said it before and i say it again, i do not have a great feeling regarding 1Mobile. That an app is on Google Play and on 1Mobile and that these require the same permissions or are the same version is no guarantee that they are not modified and safe. Even more so, Google’s introduced a some kind of app verification which checks for malicious apps from outside the Play Store that only works if you use Google Play services installed.
On mobile systems like Android it is crucial for your security to only install apps from trusted sources. No, everybody should be able to install from wherever he/she likes, but is still do not recommend 1Mobile for anybody concerned with device security and privacy.
It is perfectly fine to stay away from Google and i understand all the reasons to do so. But by installing apps from such sources, i believe you but your privacy at risk more. And privacy is the reason to avoid Google in the first place for many.

Thanks for your concern @ben
You are right, I probably shouldn’t have recommended 1Mobile Market.
I’m using it on my own risk, but I would advise anybody who doesn’t know how to distinguish between trustworthy and risky apps NOT to use it.
For me, like I said I only download Apps that are available on Google Play too and I also make sure they are released by the right developer. For example I don’t think its risky(er) to download Angry Birds by Rovio Ltd. from 1Mobile (than from GPlay), but downloading Pokemon by Animirai Studio is probably neither safe nor legal.

I’m using it on my own risk,

It think it is still the big difference between the iOS/Windows Phone vs Android world: That this is even possible. For people who know what they are doing, this is a great thing.

I would also strongly advise against using 1Mobile Market, there is absolutely NO reason to trust them and I believe they even use root privileges, which is something to be very careful of in any case. I use F-Droid exclusively and have learnt to live without the apps that aren’t on there. I have found that almost anything i NEED (so not stuff that is just nice to have) I find (an alternative for) on F-Droid.

Somebody started this thread yet?

This is a Wiki Post. Everybody can edit it. Continuing the discussion from Alternative Apps(tores): Living without Google: The purpose of this thread is to list apps and app developers, who don’t sell and distribute their products through any app store. There are some apps out there, which are very useful, but don’t get an adequate publicity because they don’t support the Google ecosystem. Since this post is wiki-ed, everyone can make their additions (as explained in this topic). Search Duc…

If you are on a desktop, you could have found the link next to @Herve5’s post.

Just wanted to share my experience of living without GAPPS, because I’m to lazy flashing the phone and I don’t have any copy of windows laying around anyway where this mediatek thing is working with.

So far everything is good, because most of the apps I need I had already installed or I find them on 1 Mobile Market. http://market.1mobile.com/

For the thing with locationing the phone I followed the link from @paulakreuzer to the fdroid app, which provides locations via Mozilla or other backends: https://f-droid.org/wiki/page/com.google.android.location for this I installed busy box (1 mobile market) and system/app/mover (fdroid)

There are apps, which needs Google Services, these are mostly apps for sharing Bikes (Call a bike, Nextbike), or Cars (Multicity). Or apps like Mobility Map. As far as I tried it, they do not work without the googel Apps thing. There are other ways of getting to know where the next bike or car stands, but this is a little bit annoying.

For my calendar I use Sunrise.am, it works with google caledar, but you do not need GAPPS for this. I choose this calendar, because it connects with the reminders of Evernote, what makes my life much more easier. My Contacts I sync with DavDroid, what you can find via fdroid (https://davdroid.bitfire.at/what-is-davdroid). They are not at Google, but at posteo, so I never needed GAPPS here anyway.

First, I’m so grateful to find people concerned with fair trade and ethical electronics building practices. It makes me feel less alone in my values.

I am not a fan of Google knowing everything I do on my phone. Are there alternatives to Google OS for the Fairphone? 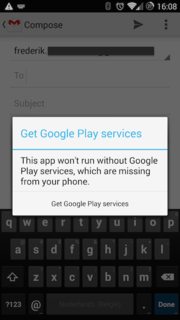