For what seems like the majority of the time now that I’ve had my Fairphone I’ve experienced the loose charging socket problem and have had to charge it by pushing the cable upwards. Recently it had become so bad that I would leave my phone on ‘charge’ all night and find it the same percentage battery in the morning, and it would only charge with an immense amount of pressure applied to the cable.

I thought I would have to send it off for resoldering, so I opened up the phone to have a look. I noticed a lot of grime and dust, especially around the charging socket area. Long story short, I cleaned the contacts on the PCB with the sharp end of a safety pin, and it seems that buildup of grime was the problem, as it now works great again, albeit I still have to angle the charging cable as before. So I’m prepared to tolerate this in lieu of risking the motherboard being damaged during a resolder.

However, while I was cleaning I thought I’d give the inside of the camera glass a wipe, even though it didn’t look like it needed it, as I didn’t think it would do any harm. How wrong I was! As soon as I touched it with the cotton bud, a big smear appeared. The more I wiped it the worse it got. Eventually I noticed there was some kind of ‘gel’ or rubbery plastic cushioned in there. I knew I wouldn’t be able to take pictures with the smear visible, so my only recourse was to remove the gel entirely.

Unfortunately once I put the midframe back on, the camera image became blurry, and fuzzy, and fuzzy-blurry. I presume at this point that the ‘gel’ I removed functioned to focus the image of the camera in some way.

Strangely, I’ve searched the forum and I can’t find any reference to this gel thing. I’ve seen people speak of the camera glass being covered in dust and having to regularly remove it to clean it, and then mentioning no problems taking pictures after that.

Would someone be able to explain what this thing I removed was, and assure me that if I order another midframe from the shop, it will come with it included?

Have a look at the 12 MP picture (click the photo to view) that ifixit.com took: 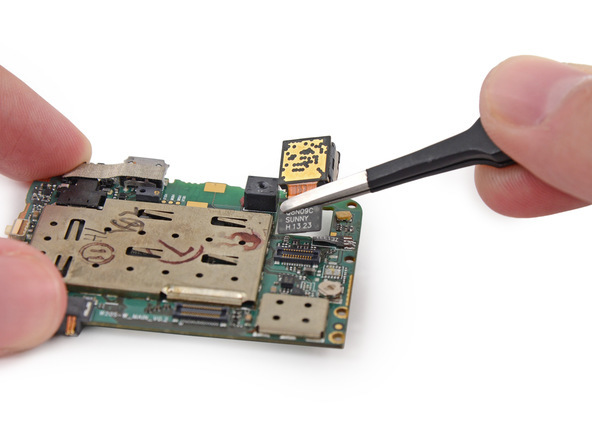 You can see a little orange yellowish pillow on the right (underneath the tool). Is this mass still on your motherboard?
(I know this doesn’t give you a replacement, but maybe it will bring you closer to identifying the stuff.)

I rather think that you damaged the camera when you disassembled the midframe. That’s what happened to me, when I did. I can’t focus anymore, but the camera is still good to scan qr codes…

Really? Well that would be crap. I can’t quite make out QR codes either.

I do know the camera was stuck to the display assembly when I removed the motherboard, and I just kind of had to hope that the connector would go back on when I pushed the motherboard back into place. It seems to have done so, this other issue notwithstanding.

So are you both saying that this gel stuff is competely irrelevant to my camera’s ability to focus?

Yes (there is no gel in the transparent camera cover).

Then what was it I removed? And why was it in my Fairphone and no-one else’s?

Looking at it again, there are some visible smears remaining on the camera glass. So I think it might be this causing the problem. I could continue trying to clean it and see if that fixes the problem, and if it doesn’t, I’ll have to get a new midframe. I’m hesitant to say the camera itself is damaged. It still appears to focus properly in the app - it just can’t achieve proper focus with all the smearing in the way.

Either way I’m puzzled why no-one knows what the material I removed is from the description I gave - this is supposed to be a company and community that knows everything about the phone from inside out.

Come on, we community people don’t know everything! You cannot expect this.

My assumption is that you scratched the plastic when you wiped over it. It happens easily if there is dust on it.

OK. So I damaged the camera, and I left scratches on the transparent plastic, and I just imagined the sticky gel material that I scooped out of it.

I understand now. Thanks for your help!

OK. So I damaged the camera, and I left scratches on the transparent plastic, and I just imagined the sticky gel material that I scooped out of it.

Don’t get fed up!

You can’t expect me to be perfect as well as I can’t remotely make a diagnosis. All I’m typing here is based on my personal experience. I haven’t ever seen sticky gel inside my FP1…

Fixed it not long after my last post; if anyone is interested, it turned out to just be the smears that were left on the glass. I removed the midframe and gave it a much more thorough cleaning, and now the camera’s image is clear and focuses fine.