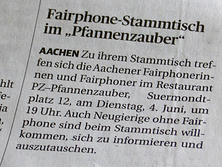 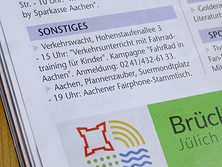 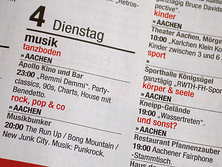 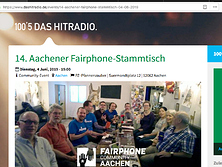 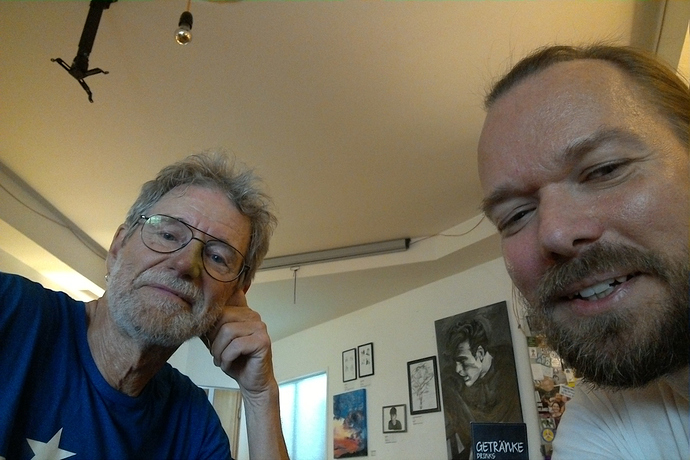 Unfortunately we had the (numerically) poorest attendance in two years. A severe weather warning that stretched from an hour prior to four hours past the meetup might not have helped.

We were just five tonight, and yet I think it was a very nice evening with some heavy duty repair jobs done. A first-time meetup attendant had already announced his FP1 repair needs in advance, and after some initial checking, I replaced his motherboard. The new motherboard has quite a journey behind it now: After its “first life”, it was implanted into an

Aachen just two weeks ago when the display it was screwed onto was hopelessly splintered. To avoid risky repairs, I replaced the whole phone (then) and was glad I had kept the damaged one when I got the latest repair request this weekend – from our aforementioned, second-hand FP1U owner in nearby Raeren

So the motherboard is doing its duty in the third FP1U from tonight.

Apart from that, I demonstrated the mighty abilities of TWRP to the two other FP2 owners, explaining how you can store a total of six or seven current OSes on your SD card, allowing you to switch between them within just 10-15 minutes without any need to hook it to a computer (well, at least not after the very first installation). Oh, and we fastened the screws of an unreliable 12 MP camera module – for now. Let’s see if the tightening helps in the long run. 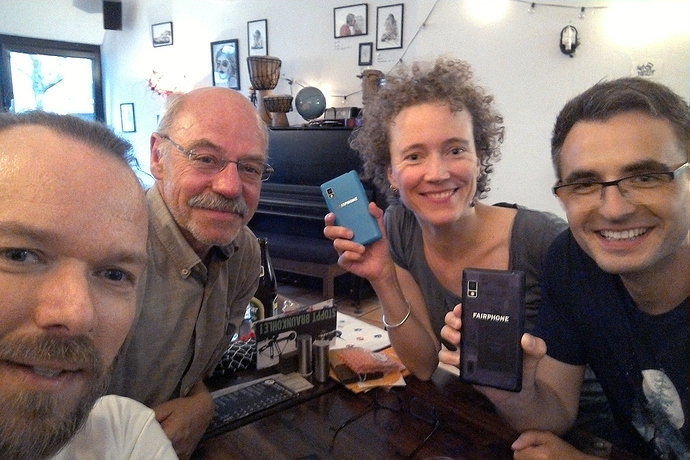 Anyway, while attendance was lacking, it was an all enjoyable and packed night with literally no breaks for the host. Oh, and I even got home before the long expected severe weather (in fact, I got to view some intimidating lightning from the top of the final hill before home, but really severe weather still has to materialize as I’m writing this

P.S.: This was the first Fairphone Community Aachen meetup with its new very own Community FP2. Thanks to the magnanimous-beyond-all-means donation by @jmcornel, our community is from now on permanently equipped with a used and (with the sole exception of SIM connectivity) fully functional CFP2 that celebrated its premiere in last month’s Zeit für Utopien movie showing. Now feel free to give Jessica a load of likes, please! 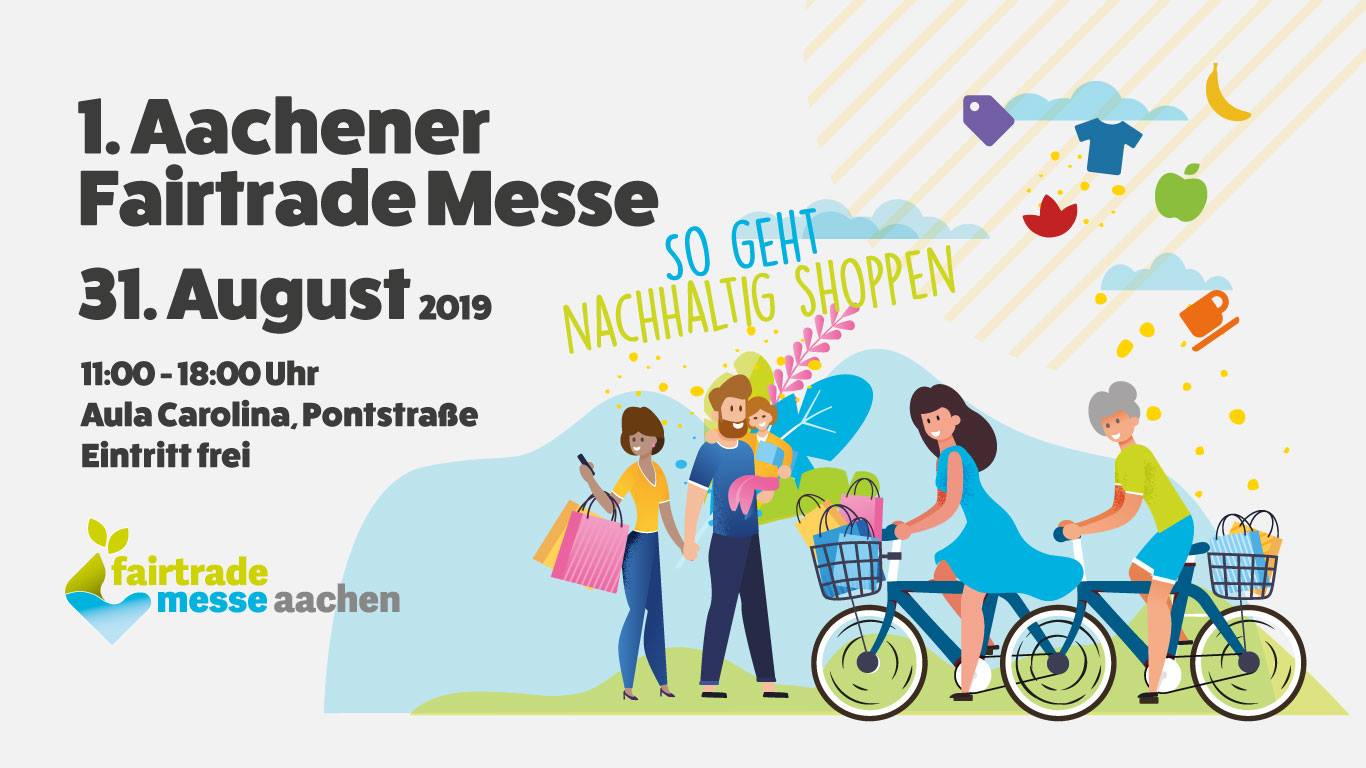 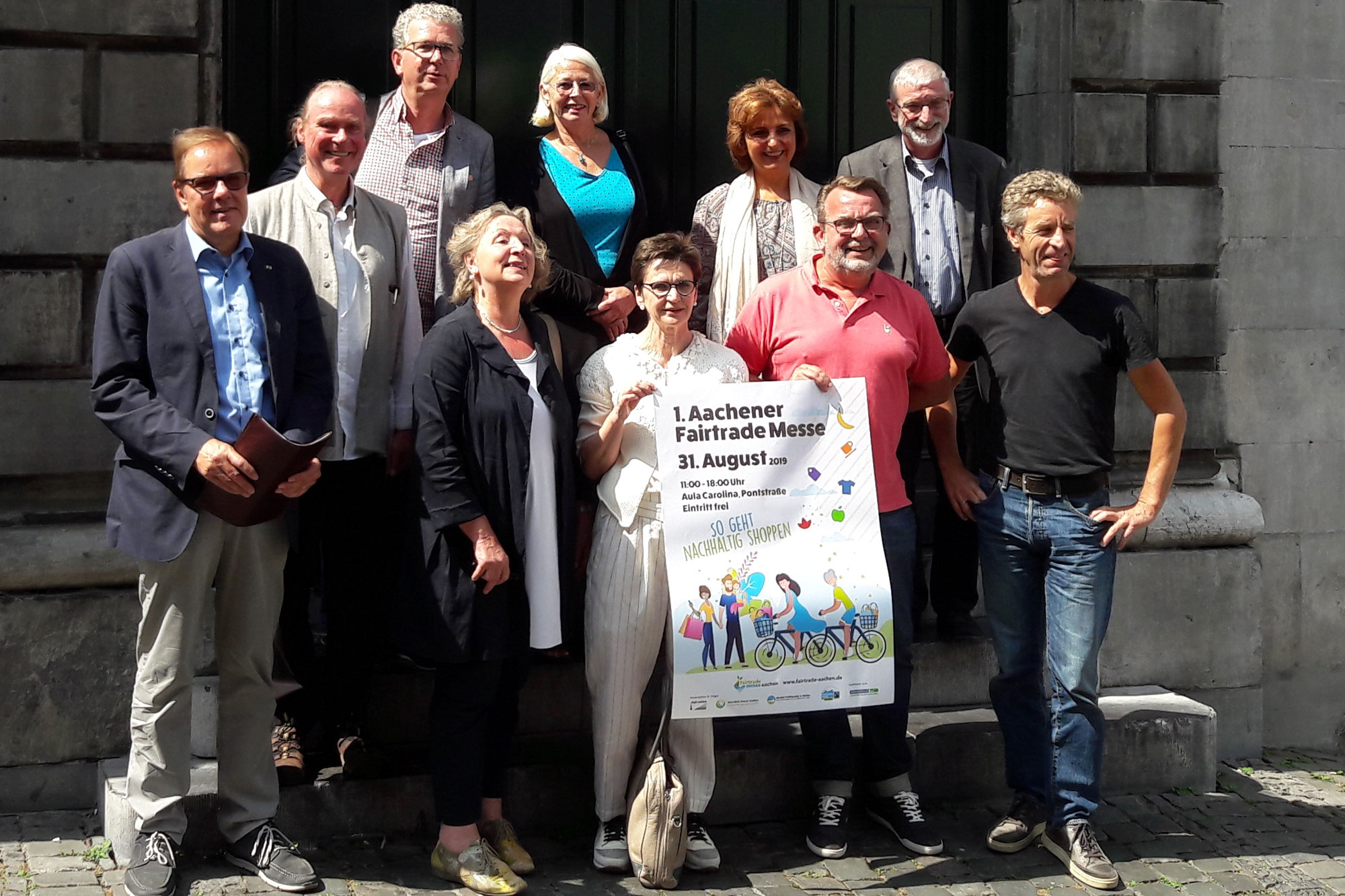 Fairphone Community Aachen will join the first-ever Aachen Fairtrade Fair on saturday, 31 August in the Aula Carolina at Pontstraße 7 (near Market Place / Town Hall). A small (volunteer) Fairphone booth will stand by for questions from all those interested in Fairphone. Both the Fairphone 1 and the Fairphone 2 will also be there for a first-hand experience 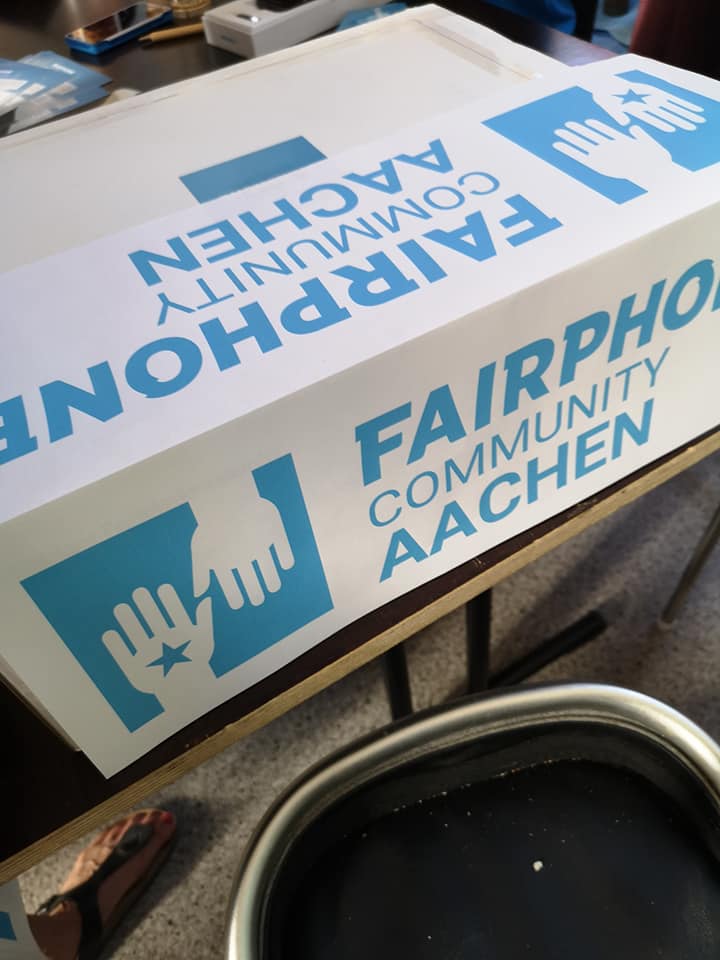 Lots of conversation with people interested in buying and with local press even before the official starting time … what followed was quite an exhausting afternoon. I’m out of FP3 promo cards, out of FP3 promo leaflets and nearly out of a voice. I think I easily poured 6 litres of tea and water into my throat today (so far).

The FP3 was met with general acclaim, people who took photos liked them and to my great astonishment, several of them lauded how the FP3 (187 grams) was so nicely lighter than both the FP2 (164 grams) and the FP1 (170 grams) … 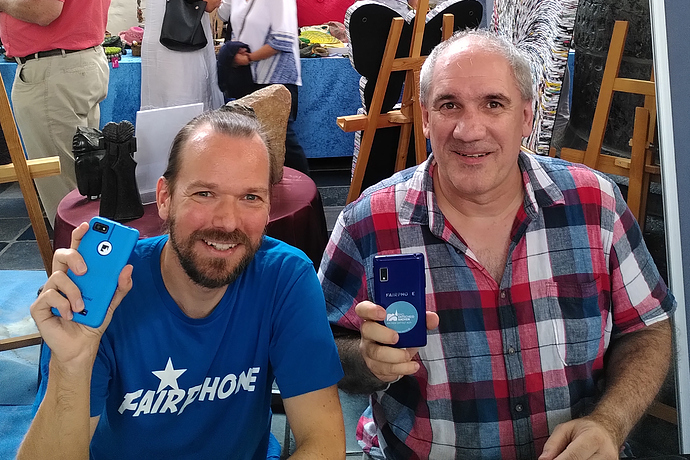 Now apart from the above FP3 shot (cropped) of a Fairphone(r ) 1 and a Fairphone(r ) 2 I’m also adding a shot (unedited) in bad light below. While it doesn’t hide the simple fact that it’s dark, I think it still impresses me how much detail it still captures.

Simply speaking, both photos were taken from almost the same photographer position, just – you guess it – once with the sun in the photographer’s back (1st shot), the other time in the face. 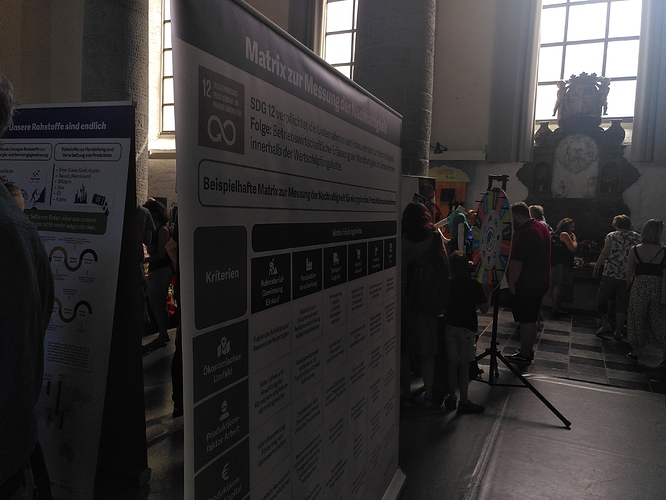 My translation of the Fairphone paragraph [in the article linked to right above]:

A big crowd can also be found at Urs Lesse’s booth. While he does not sell anything, he’s part of the Aachen Fairphone Community. Since 2013, the Dutch company offers a smartphone consisting of fairtraded materials. Especially tin, tungsten, tantalum and gold were often sourced from conflict zones. Besides, the[se] smartphones can – in contrast to others – be repaired by the user him/herself. Urs Lesse periodically offers events to give those interested the opportunity to get to know this sustainable smartphone. 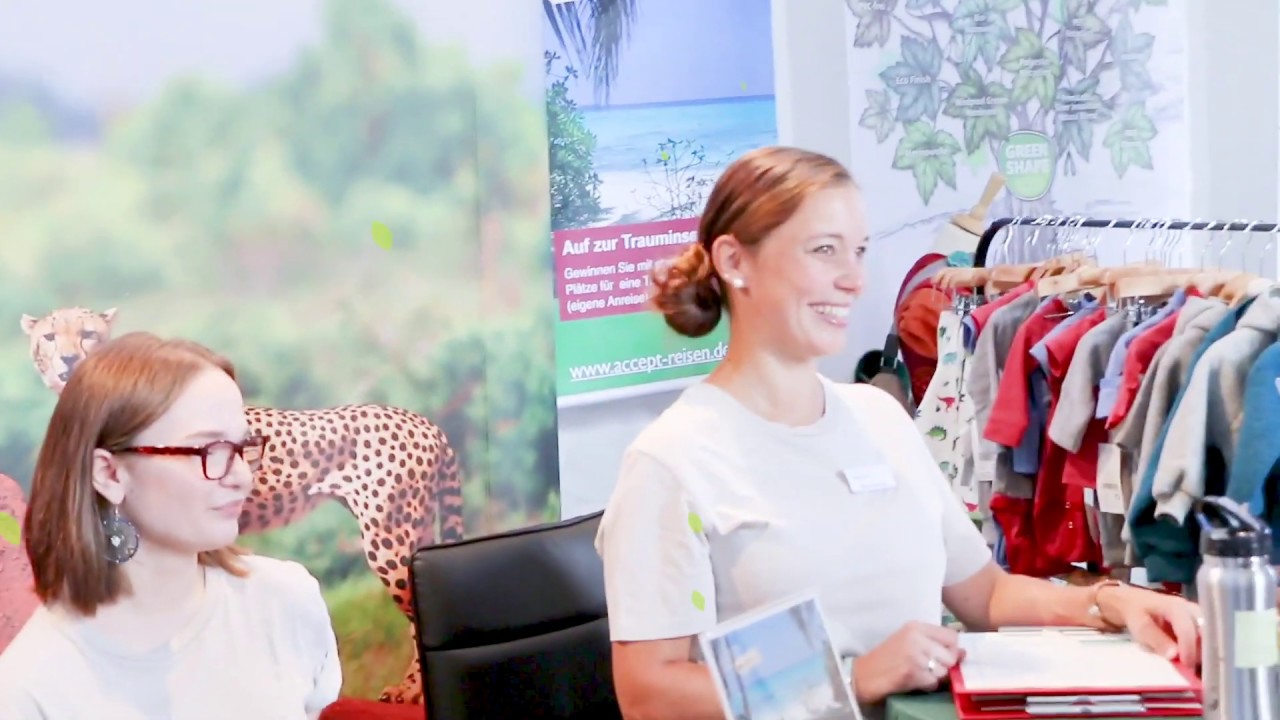 With Fairphone just having launched their new phone in Berlin and Amsterdam last month, our quarterly meetup is your opportunity to experience the new Fairphone 3 live.

If you already know you’ll join us on 17 September, feel free to press “Going” at the very top. Last but not least I will be grateful if you would share either this announcement or the Facebook Event with anyone who might be interested. 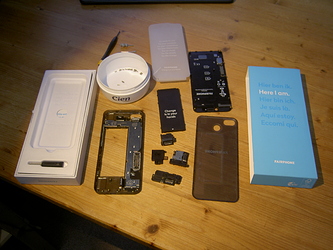 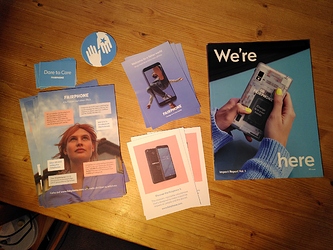 … and host’s in place 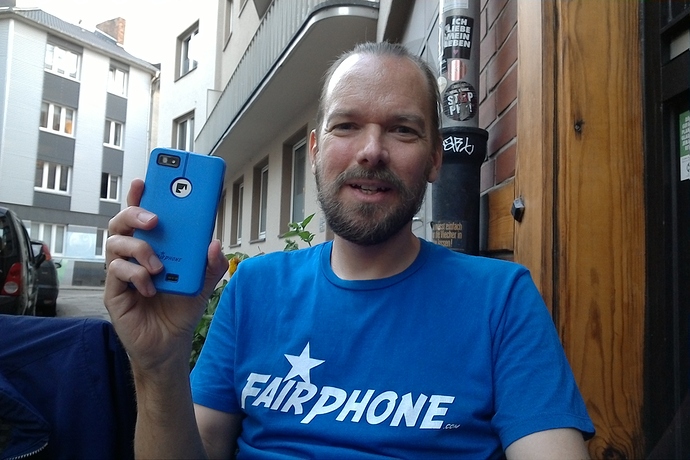 Eventually (depending on count) a good mix of 7-10 people that included more than one FP1, a couple of FP2s and a few curious newbies without a Fairphone (yet) at all. There was quite some interest in Fairphone and the FP3 from another meetup at the next table as well, including that other meetup’s host who had already ordered the FP3 right after the 31 August Aachen event. 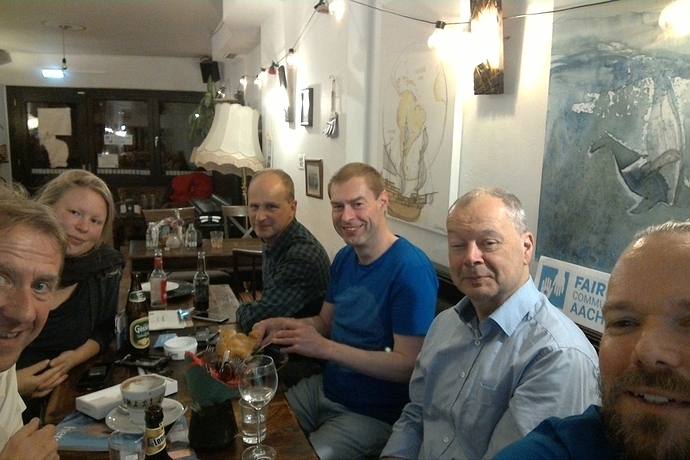 The generous options of switching back and forth between at least half a dozen operating systems on the FP2 actually made one of the latter participants more eager to find a used FP2 than to wait for an FP3 and its (hopefully) eventual opening for alternative OSes. Once again, the (prototype) FP3 was disassembled – for the 8th, 9th, 10th time by now? – and reassembled with success. While Fairphone/F-Droid’s Checkup app as well as the Camera app prove it still works flawless, some of the connections and connectors are showing signs of wear by now (again, this is a prototype FP3 and the experiences gained through it already made Fairphone improve and reinforce the final model selling now – an extra screw and reinforced threads etc.)

Some tests and (hopefully) repairs on a malfunctioning FP2 display (it was dropped) will go into extra-time tomorrow … and if all goes well, might result in another LineageOS user. 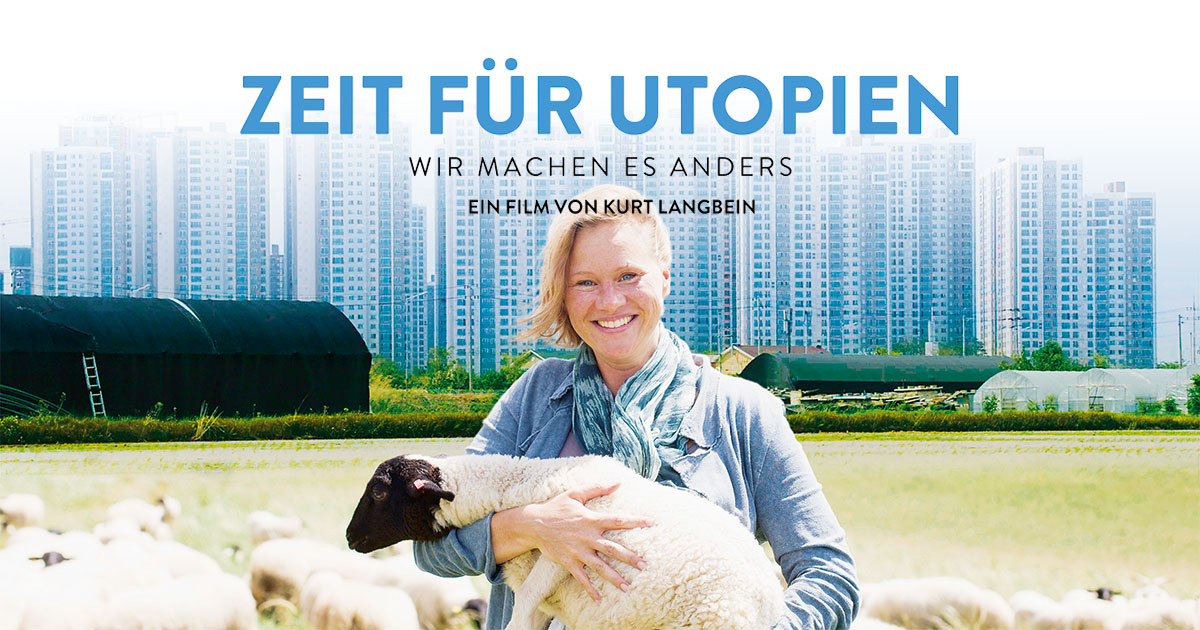 The Fairphone 3 has landed again in Aachen today. If you want to test it in person, let me know. Or even better, come to our wednesday 4 December 18:00 h showing of Zeit für Utopien in our local Cineplex, Borngasse 30, 52064 Aachen. A small Fairphone booth will be set up before and after the showing. 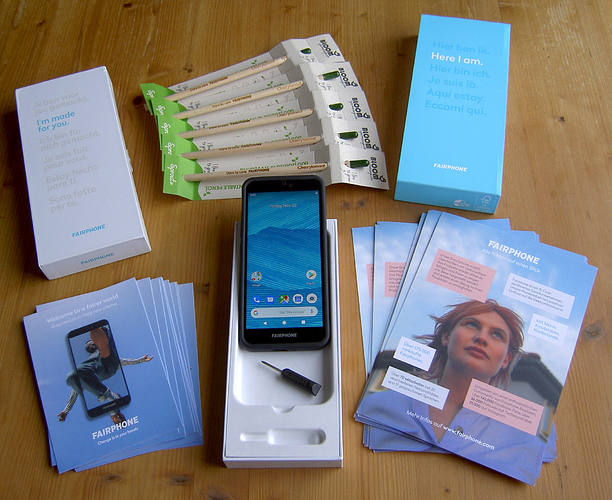 Again a healthy crowd viewing the movie and quite a vivid interest in Fairphone both before and after the movie. And also again, a lot of first time acquaintances with Fairphone and eventually some nice pub networking with the other organizations present around the showing.

Having experienced two showings of “Zeit für Utopien” now, I can only (still) strongly recommend to other Fairphone communities to consider organizing a showing themselves – or just be visibly present at one. The thing is that while the movie poster and the usual synopsis of the movie doesn’t tell this right away, it actually spends such a generous amount of time and footage on Fairphone that it can easily be called the centrepiece of the movie. In other words, “Zeit für Utopien” has people generally interested in all things sustainability and change going into it and people all interested in Fairphone coming out of it.

Given the widely known Corona situation, our next meetup will be a virtual one. Using Jitsi Meet, we will link up in a

If you want to participate and haven’t received access details via e-mail yet, just send me a personal messagehere in the forum. 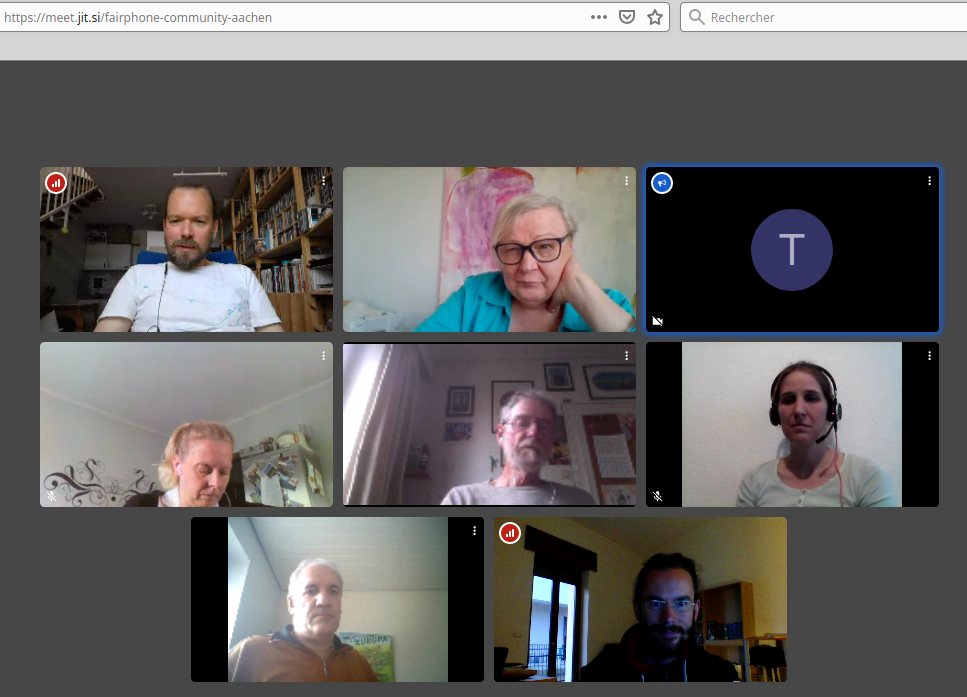 Thanks @oli.sax, our model European from Belgium who’s living in Taranto, Italy, speaks French, English, Italian and German – thanks to a personal link

to Switzerland – and who joined our video call tonight together with nine other Fairphoners from Vaals (NL), Aachen, Solingen, Düsseldorf and Stuttgart. I think it was a nice premiere videocall for the Fairphone Community Aachen that might get a repeat in a couple weeks (well after @Friek gets her own shot a setting up a video conference in her hood first). Again some part of the conversation was how to allow Fairphoners to keep using their trusted and beloved Fairphones (both FP1 and FP2) for longer.

Looking forward to seeing you folks again some time soon!

Given the widely known Corona pandemic, our next meetup will be a virtual one again. Using Jitsi Meet, we will link up in a

Our local Fairphone Community Aachen will learn about the alternative operating system /e/OS available both for the FP2 and the FP3 for a couple of weeks now. Munich Fairphone Angel Volker will introduce us to /e/ and be available for questions and discussions. Of course, there will still be time and opportunity afterwards for other questions and discussions about Fairphone, the FP1, the FP2 and the FP3.

If you want to participate and haven’t received access details via e-mail yet, just send me a personal message here in the forum.

Please note that the primary language of our event will be German.